Ask Question
Asked 3 years, 7 months ago
Active 9 months ago
Viewed 560 times
4
$\begingroup$
This question already has answers here:
What colour is the foliage if the sky is violet? (3 answers)
Closed 10 months ago.

What about the atmosphere of earth makes green the best color for plants, and what would have to change to make blue the best color? The fact that these changes could not happen on earth, an so would require a totally contrived planet, does not bother me.

Green is the most common color because Chlorophyll absorbs blue and red light, reflecting the green. That has a lot to do with the chemistry of Chlorophyll, and changing Chlorophyll to reflect blue is far too much trouble. Besides, Earth has already solved the problem.

May I introduce you to the Malaysian tropical plant Begonia pavonina.

This plant (and its varieties) have a cobalt blue leaf because it uses a different process for photosynthesis — one that uses the more voluminous red-green spectrum rather than the blue spectrum used by Chlorophyll. It needs it because very little light penetrates to a tropical rainforest floor.

In particular, Whitney and her colleagues noticed something funky with the spire-like structures called thylakoids found inside the chloroplast capsules. Thylakoids look like tiny towers, and the light that enters them is what's turned into chemical energy.

Look inside the chloroplasts of most plants and you'd find these tower-like fairly randomly placed, like a slap-dash collection of buildings. But the thylakoids inside the Begonia's chloroplasts had a incredibly regular structure. Less like the irregular Manhattan skyline, and more like a planned city.

According to Whitney, the rigid, precise structure of these thylakoids creates a couple of fascinating effects. First, their ordered placement means that the entire chloroplast capsules tend to reflect away blue wavelengths of light, which is why the leaves appear iridescent blue to our eyes. Losing this blue light isn't a problem for the Begonia plant's energy efficiency, since most blue light is absorbed by the rainforest growing above it anyway. Instead, the thylakoids are far better at absorbing red-green light, the flavor that tends to be most abundant in the perpetual dim of the rainforest floor.

But here's the strangest quality of these cellular structures: Light itself actually slows down as it barrels through the Begonia plants' chloroplasts. That's due to the precise arrangement of the tower-like thylakoids, which together act like a dense crystal. While light always travels the same speed in a vacuum, it will slow down when passing through different types of matter. This effect is known in quantum physics as slow light. Combined with the increased uptake of red-green light, this effect increases the efficiency of the Begonia plant's photosynthesis up to 10 percent.

The original article with all the wonderously gory details can be found at Nature Plants.

On your world the Thylakoid design used by Begonia pavonina evolved generally rather than specifically for Earth's tropical rainforests. If you want a reason for that (which is likely far too much detail for your story), then you could shift your sun away from the green spectrum (unlike our sun which dominates in the green spectrum), or have something like cloud cover that absorbs the blue spectrum, leaving the red spectrum. But, like I said, that's probably too much detail.

Or, if this is too much work, you could lace your soil with cobalt or some other blue-leaning mineral, which will taint the leaves. It might be simpler, but it would be way less cool. I'm just sayin'.

Actually, blue plants can exist on earth, but they are very rare for a simple reason that has nothing to do with the atmosphere.

Put simply, the chlorophyll in plants which is responsible for photosynthesis absorbs light in the blue part of the spectrum most easily, and the green part the least, so leaves of most plants look green. In some cases, particularly with deciduous trees, the leaves contain natural anthocyanin and other natural pigments which are exposed when the plant stops photosynthesising through winter, and these are more reds, pinks and the like.

Ultimately, your world would need a modified natural pigment that (when chlorophyll counts drop over their version of autumn,) gives off a natural blue colour. the link above should give some of the chemical possibilities but on Earth at least, it's very rare.

I encourage you to refer to this article from a researcher at the NASA Goddard Institute for Space Studies: https://www.ebscohost.com/uploads/imported/thisTopic-dbTopic-1033.pdf

On Earth green isn't necessarily the best color for plants, but one of the very good colors for terrestrial plants. Under water plants are often a different color. What makes Earth plants green is the prevalence of chlorophyl in their cells. Chlorophyl is in turn green because it strongly absorbs red photons and blue photons, reflecting instead green photons. Why it evolved this ways seems quite straightforward: chlorophyl makes effective use of the available light energy. The sunlight that reaches ground level on Earth peaks in the red, so there are more red photons than yellow, or green, or blue. However there are still a decent number of blue photons, and these impart more energy than red photons. So green plants have evolved to make use of red photons (which have the numbers) and blue photons (which have the energy) and discard the middle (green) which has neither the numbers nor the highest energy.

Put all this together and the answer to your question is implied....change the distribution of the light spectrum reaching ground level. The simplest way is to change the star type from G-type (like Sol) to an F-type or M-type star.

Assuming an earth-like atmosphere, the spectrum of light reaching ground level on a planet circling an F-type star would peak strongly in the blue. So if plants evolved to make use of these plentiful high energy blue photons, they'd absorb blue and instead look...orange/red I suppose. Or perhaps they'd evolve to reflect blue light (and hence look blue to human eyes) because there's simply too much high energy blue light and absorbing all that energy would disrupt their chemical processes (i.e. fry them to a crisp).

Similarly, around an M-class star, the sunlight peaks strongly in the infra-red (1045nm or there about), so plants would likely evolve compounds to preferentially absorb these wavelengths. What this means is that the plants might reflect other wavelengths of visible light, or perhaps try to absorb the entire visible spectrum (to make use of less light energy coming from a dim sun). If the plants evolved to make use of the orange through infrared parts of the spectrum, and reflect away the blue part of the spectrum (simply because there isn't enough of it to warrant energy expenditure on growing blue-absorbing pigments) then the plants would look blue. Perhaps very dark or desaturated blue due to the other pigments and/or lower visible light levels, but blue nonetheless.

A lot of this comes down to evolutionary happenstance. But as you can see, there are basic principles which influence the likelihood of particular plant color schemes.

If you want your plants to be blue instead, you need their chlorophyll molecules to be efficient at all colors except blue.

Unfortunately, this creates quite the hurdle for you, as blue wavelengths contain the most energy, and thus would be very desirable for any photosynthetic organism.

But all isn't lost. In order for a molecule to capture a photon, it needs to have a comparable wavelength. This is why radio antennas are sized according to the wavelength of the frequencies they intend to pick up, and why your cone cells come in only 3 colors, with each sensitive to a specific color (as opposed to a wide spectrum).

So, for your plants to be blue, you need to radically change the evolution of their chlorophyll molecules to preferentially absorb all colors except blue. Probably the best way to do this would be to make certain assumptions about the spectrum of your star, perhaps shifting it so that there's much less blue light, and more red/orange/green light.

Chlorophyll is a chelated molecule, using magnesium as the metal core. It might be possible to say that magnesium isn't used in your plant's chlorophyll, and that instead, a different metal is used, the properties of which make it preferentially scatter blue light instead of green.

So, for a complete scenario:

As the other answers say, it's not the atmosphere, but the photosynthetic chlorophyll that's responsible for the green color of leaves. If you want a different color, then simply posit that evolution on your planet started with a different photosynthetic molecule. There are a bunch of known ones, as in this list: http://terraformers.info/photo.html

It is nothing to do with the best colour it is just to do with the chloroplasts in the plant cells(used to make food through photosynthesis). The reason they are green is because of evolution. When land first appeared, Green algae had been the only algae around. Then through evolution, it learned to live on the ground and make its own food. For trees/ plants/ grass to be blue, then you would have to find a newly born world and permanently dye the algae blue. However not all planets could even have the right atmosphere for plants on the ground.

You could make sweet purple plants using bacteriorhodopsin instead of chlorophyll. 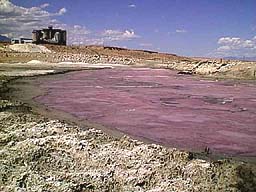 Bacteriorhodopsin: The Enzyme Plants Wish They Had

This is Owens lake and it is purple from a bloom of photosynthetic halobacteria. The bacteriorhodopsin they use absorbs green light, reflecting blue and red to make this purplish color.

Tweak it as you see fit. Clearly there is not one light frequency that is better or worse than others. Just as chlorophyll absorbs red and blue and reflects green, and vice versa for bacteriorhodopsin, have a fictional pigment that absorbs red and green and reflects blue.

Not the answer you're looking for? Browse other questions tagged biology earth-like earth flora unusual-color or ask your own question.

24
What colour is the foliage if the sky is violet?
8
A more alien world: Flora

13
How to evolve blue skin?
8
A more alien world: Flora
19
Blue soil (aka dirt) in an earth-like planet?
4
Why would plants on an Earth-like planets photosynthesize without using blue-wavelength light?
29
Can a planet harbor plants of different colors without one pigment outcompeting the others?
8
Are Extraterrestrial's pagoda trees plausible?
1
Would structural colouring work for making hair green, blue and or grey?
4
Purple plants on a planet orbiting a green star?
3
What Kind of Pigment Would Allow Basic Photosynthesis and Give the Skin a Blue Color