What can cause water to be foam-like, in lumps, but still liquid? Something similar to goo (jelly like but liquid and opaque)?

I have a planet and such kind of water, which is drinkable and the temperature of which is 10-15 Celsius. It is a stronger blue color and you can pick it up like goo it doesn't exactly flow like the usual water, instead it divides into lumps and falls in kind if morphed distorted ~ball-like forms.

I would like to have an explanation as to how it can be possible? Can this be because of gravity or atmosphere, or maybe something else.

I'd think this is more of a Biofilm or biological hydrogel. An ubiquitous organism that lives in all the available water of the planet, and rapidly colonizes any 'fresh' water. That would explain the colour and texture, whilst still being perhaps 99% ordinary water. As long as the organism was not toxic, it would be perfectly drinkable.

Water "sticks together" because the hydrogen ions are constantly being shared with neighboring water molecules. Surface tension is even stronger than the normal water bond because the molecules at the edge of the liquid can't share ions in all directions, so they bond even more to the molecules they can touch.

Flowing ions is the realm of electrical fields, and there have been experiments using electricity to disrupt the surface tension of water. "Surface tension of electrified water decreases as the positive or negative charge increases, but its density and viscosity are the same as those of neutral water." In the articles I found, the goal seemed to be to use electricity to make water itself more soluble.

This is the opposite effect to what you want, so I propose a handwavy planet with a "strange" electrical field that resonates with the hydrogen bond in water, perhaps very subtly, just enough so that the water surface generates it's own coherent electrical field. This "plasma water" is only a few molecules deep, enough to change the surface tension but it is still regular water.

Because we've given the surface of the water an electrical field, it will display electromagnetic behaviors like magnetic braking and motion damping when it encounters any ion field – the same damping effect that we see when a magnet is dropped through a copper pipe. 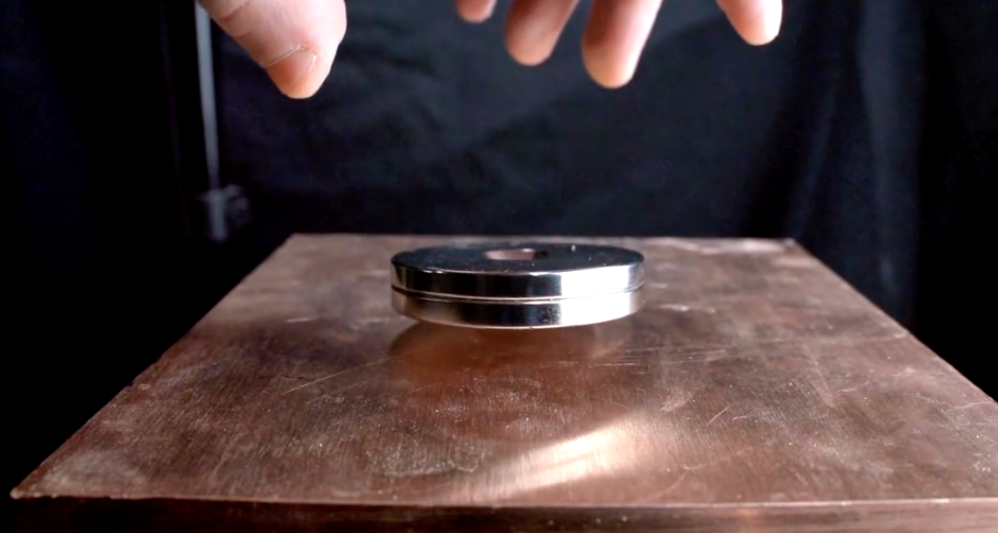 This video shows many examples of "weird" behavior when a magnet encounters a copper plate, including braking and damping. https://www.youtube.com/watch?v=sENgdSF8ppA

In this scenario, only the surface of the water experiences magnetic braking and damping. The larger globs of water have more mass-to-surface ratio and behaves more like regular water, but smaller drops might suspend longer in the air, and interact with other small globs to align into threads and filaments. The strongest ion field the foam is likely to encounter is the plasma "skin" of a larger body of water, hence the electrified foam will filament and float above a body of water for a second or two as it navigates through the water's ion field. If you want to push the electrical effect your foam might even have the occasional glow or electrical spark.

Pure water has the chemical formula H2O. It has the properties it has, there is nothing you can do to change that.

The closest you can get with pure H2O is water / ice slush. This can form naturally when water is cooled down to 0 celsius while being agitated. It's called Frazil ice . But if left long enough it will go hard, just as old snow does.

To make goo, you need to add polymer to water. Surprisingly small amounts are required. This small 85g box of Jell-O is enough to make an entire bowl of solid dessert.

Foaming is caused by a group of chemicals called surfactants. they lower the surface tension of water and cause bubbles to be more stable. These also tend to be organic molecules (not necessarily polymers but the gooeyness also helps to stabilize the bubbles.) Common soap is made by reacting fat with caustic soda to break the fat down into fatty acids and glycerol.

Substances that create these effects are often of biological origin (nasal mucus, algal slime, etc.) These would have nutritional value, but would therefore unfortunately be colonized by bacteria, fungus and other nasties if left in the open, so you wouldn't want to consume thm

But you can get a similar effect when you mix two salt solutions, rapidly, causing a solid to precipitate instantaneously. This is the process used to make the beads of silica gel which is then dried by heating to form the hard granules of drying agent that you find in new purchases.

There are also clays which are very sticky, such as bentonite.

While I wouldn't recommend eating silica gel or bentonite, they shouldn't do you any harm and are of no nutritional value, so if they are from a very clean environment such as a lifeless planet they should be bug free.

Some liquids have more than one state. This is called polyamorphism

Kurt Vonnegut's book Ice-9 invoked a fictional state of ice (which has multiple real states; the 17th was recently discovered).

Ice-nine is a fictional material that appears in Kurt Vonnegut's novel Cat's Cradle. Ice-nine is described as a polymorph of water which instead of melting at 0 °C (32 °F), melts at 45.8 °C (114.4 °F). When ice-nine comes into contact with liquid water below 45.8 °C (thus effectively becoming supercooled), it acts as a seed crystal and causes the solidification of the entire body of water, which quickly crystallizes as more ice-nine. As people are mostly water, ice-nine kills nearly instantly when ingested or brought into contact with soft tissues exposed to the bloodstream, such as the eyes or tongue.

In the story, it is invented by Dr. Felix Hoenikker[1] and developed by the Manhattan Project in order for the Marines to no longer need to deal with mud. The project is abandoned when it becomes clear that any quantity of it would have the power to destroy all life on earth. A global catastrophe involving freezing the world's oceans with ice-nine is used as a plot device in Vonnegut's novel.

Your world would flip this on its head - your oceans are full of polyamorphic water, a previously unknown water morph. On contact with terrestrial-type water our common water sets off a rearrangement of the polyamorphic water into the Earth pattern, so your amorphous water will melt in the mouth.

Just as Ice-9 poses a danger to earthly life (by crystallizing the oceans) so too a drop of sweat could catalyze the dissolution of your worlds ocean into liquid. You will have to invent some mechanism to prevent that, or allow your oceans to revert in the cold, or something like that.

instead it divides into lumps and falls in kind if morphed distorted ~ball-like forms.

You're describing Water Beads/Balz, which are little polymer beads with a stunning capacity to absorb water.

I have a planet and such kind of water, which is drinkable and the temperature of which is 10-15 Celsius. It is a stronger blue color and you can pick it up like goo it doesn't exactly flow like the usual water, instead it divides into lumps and falls in kind if morphed distorted ~ball-like forms.

In your world, there is a ubiquitous, blue, modestly hydrophilic polymer on the planet that is -- unlike Water Beads -- non-toxic. The modest strength of it's hydrophilia allows the water to be taken up by life forms.

Not the answer you're looking for? Browse other questions tagged science-based planets water .

1
Creating a stable split earth
24
What effect would liquid sulfur oceans, sulfur dioxide in the atmosphere have on visibility, sound propagation and other environmental information?
3
Element Handling Justification: Water manipulation
6
How could a foam habitat support animal life?
4
is there a way to levitating entire body of water in earth and make it stay in the sky?
6
How long would it take for water vapor from an ocean asteroid impact to rain back down?
4
can bacteria or microorganisms produce or excrete blood?
8
Setting up a bonfire in a methane rich atmosphere: is it possible?
16
What would be the appearance and color of a deep, pure and vast liquid CO₂ ocean as viewed from space (ignoring the atmosphere's influence)?