How would a species similar to the Rito from BOTW evolve?

When I played Zelda: Breath of the Wild and met the heavily redesigned Ritos, I took an immediate liking to their designs. Although the fact that they're fully bird-like helps, it's mostly because of the way their wings are designed. 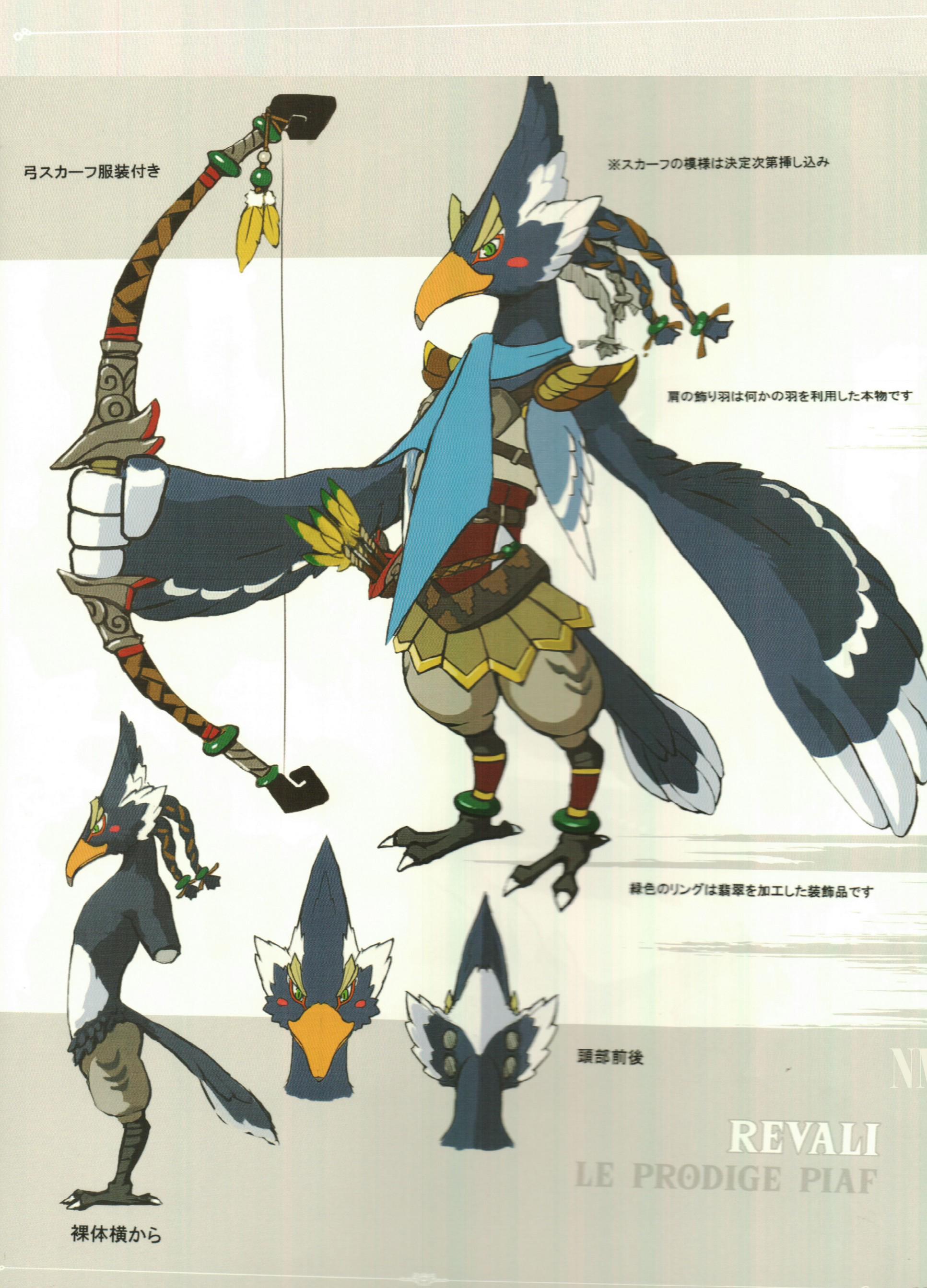 If you notice, their wings are different from a lot of bird-like humanoid designs. Their wings also act as their "hands" instead of only having wings or both hands and wings separated. I'm wondering how could a humanoid flying species (Garuda, Harpy, etc.) evolve with this style of wings and still be functional?

EDIT: Sorry, I wasn't being specific on one detail. When I meant the wings acts as their hands, I meant the other way around; Their hands act like wings, with feathers covering their fingers and evolved in a way capable of flight. It makes more sense in retrospect. So with that in mind, how could a speicies still fly with wing-like arms, regardless if there more like a bird or a human?

OK, the wings are too small for flying or even gliding really, and the feathers as fingers don't work. So lets look at this from a different perspective.

The feather fingers are actually fingers with a feather like covering. I'll explain below.

With the size of the Rito flying would be difficult even with large wings. So it had probably been a large flying predator that went to ground for some reason and increased in size to become a land predator. This has happened before with the Terror Bird of Central America, so it's not completely out of line. The strangest part would be keeping the wings.

Keeping the wings instead of having them atrophy could be explained away in two or three ways. One they used them as weapons to club prey and predators, kind of like a swan or goose uses them. Or as a second choice it could glide for short distances to ambush prey. Finally and most likely the wings were used to signal mates that they were healthy, getting smaller for survival purposes but still resembling wings.

With the feather covered fingers, if the Rito are keeping their winglike arms anyways, having the former fingers becoming flexible and more like hands would be an advantage for manipulating objects and ripping meat from bone. The feathers would stay on the fingers making them look like long feathers to keep the wing appearance for mates. Also too keep the aesthetic, mate pleasing wing look, small nails or talons are kept hidden under the feathers, allowing it to use its hands for attacking and eating prey without ruining its look.

Given enough time and some weird but not totally impossible evolution to make them have a humanoid body shape, you could get a creature resembling a Rito.

Here's a pic or two showing the skeletal and muscular structure of a bird wing. You can see the hands (metacarpals = bones in the meaty part of your hand, and phalanges = fingers) are largely fused and vestigial in birds. You could make a race of birdfolk where the hands were still usable and human-like. The only caveat would be that the fingers are fingers, not feathers (they might have small feathers so there's no exposed skin, but they aren't flight feathers aka remiges).

Also, the wings might need to be a little oversized for the bird-person since the hands aren't helping with the flying and this wing design is probably less efficient for flight than a real bird's. You could also go the other way, and say that they can only fly poorly with limited agility and for short distances relative to a bird.

PS I learned the word remiges today thanks to this question

Speaking to the question of how this species could have evolved...

Cool lookin' birdy. I agree with the comments and the answer MParm has given.

I think it would be helpful for you to design first an ancestor of this species, which BINGO, we already have—birds. Raptors specifically. Then you need to ask what evolutionary advantage a bird gains through tool building. Some birds already are tool builders, the cockatoo being one of the latest and greatest examples. But crows and a few others use tool building behavior as well.

The difficulty for a kick-ass looking raptor like we see above is what advantage does an already successful predator gain through the development of hands, which no doubt would serve as a disadvantage regarding its flight characteristics. Birds can build tools without hands; so, why would they need them? (There might be an answer to this question, but I can't think of it off the top of my head.)

Notwithstanding, I realize that some evolutionary developments do not seem to have a purpose (the appendix, uvula in humans), but they don't detract so much from a species' survival so as to not select individuals who exhibit that characteristic.

In the case of the Ritos, I'm skeptical of a tool-building, hand-wielding species, since they don't need to develop those characteristics and still survive. I.e. the picture above shows them still possessing a sharp beak and talons.

Here's another great link showing the relationship of tool-use, intelligence, and the changes witnessed in hominids, specifically: https://www.livescience.com/7968-human-evolution-origin-tool.html

EDIT ## Per Sasha's question above, I suppose you could artificially design a species like this. I'm doubtful, though, that a bird would evolve that way naturally. Thanks for the great conversation—I just love the exchange of ideas here! - DDM

3
Evolving an intelligent avian race with a human-like appearance
8
Using feathers as fingers
11
Could you make Bat wings shaped like the different kinds of Bird wings?
5
Avian-human: Arms or Wings
7
Is the Avian species from the game Starbound plausible?
6
Is there a reason a flying creature would evolve “wings that act as hands” instead of “wings with hands attached”?
8
Naming the "hand" of a humanoid bird
1
Might this animal be able to fly?