What sort of life could live in a ocean with no bottom. In this scenario, there is no seafloor, no matter how far down you go. Once you exit the continental shelf, it plunges straight down into infinity. The side of the continental shelf also plunges down forever. In addition don't worry about life not being able to get started in such an ocean which sound like what would happen given my basic knowledge of biology

Edit I mean that the ocean literally goes down forever. This is not a planet sized ball of water, this is a infinite descent into the eternal depths
Edit this ocean does have a top which has sunlight coming in. Islands and continents also exist and they go down forever too. This is probably a flat finite world that gets weirder as things go out due to processes similar to what caused farlands in mine craft

You can't have an ocean that goes on forever downward.

If you pretend that gravity is simply a magical force that acts downward on every object, then you'll run into a bit of a problem as your ocean gets deeper.

Since pressure is a thing, as you descend deeper into the abyss, the weight of the water above you presses down. Assuming that that pressure is proportional to depth ($P(d)\propto d$) then $lim_{d\to \infty}P(d)=\infty$, which basically means that you're gonna have a black hole at the bottom of your world.

Yeah, calculus gets weird when you put in infinity.

Before you get there, though, you're still gonna have some issues with ice. Water has a lot of weird states as it changes in temperature and pressure. 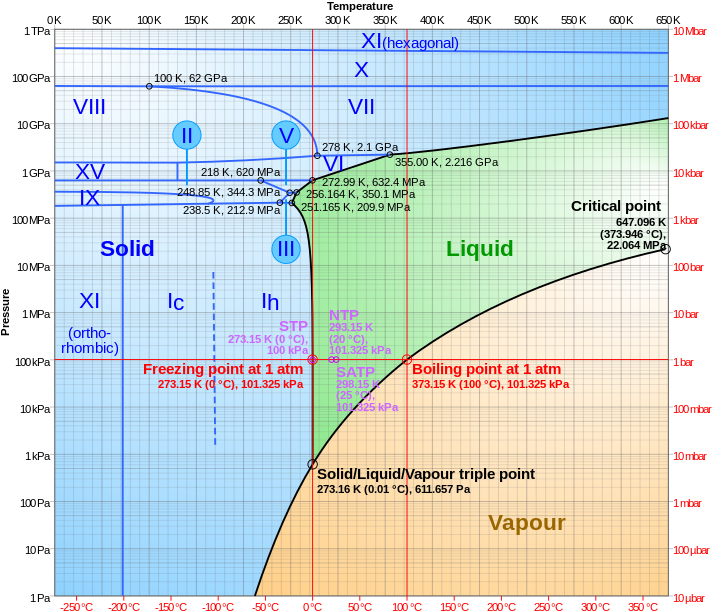 Even at high temperatures, if you compress water enough, it'll turn into ice. All the roman numerals in the diagram describe the different phases of ice, of which there are many. Basically, as you go deeper, water will become ice without needing to freeze.

But wait! What if I heat the water?

At 650K, water and steam are literally the same thing. This is known as the critical point. After this, you have a supercritical fluid, and eventually a plasma.

Ok, massive handwaving time. Let's pretend that there's just a infinite expanse of water that's always the same pressure no matter how far down you go. Blame it on whatever you want, but it's a thing.

It just so happens that water (at sea level, anyways) is most dense at 4°C. Since water freezes below this, it sets up convective cells that shuttle heat downward.

Except that you have an infinite volume. Infinite volume means infinite heat capacity. No matter how energy you put in, eventually physics gets in the way.

Well, at this point, you're all set. You've cannibalized most of known physics and chemistry, and since we don't really have rules for your world that match our own, we can't postulate on what kind of life might form.

Moral of the story? Things get weird when you use infinity.

Others have pointed out that the oceans can not be infinitely deep. Theoretically there could be oceans much deeper than Earth's on either planets or flat worlds.

But lower ocean levels do have some value to upper ocean dwellers. I believe that sperm whales dive deep to feed on squid, eating countless smaller squid and many thousands or millions of giant squid every day. And the sperm whales poop in the upper oceans and help fertilize them.

There is a constant rain of organic material from the upper oceans down to the seafloors. This tends to impoverish the upper layers and enrich the ooze at the bottom of the seas and help support sea bottom life. And in some places, currents bring material, including nutrients, up from the sea floors to the surface of the sea and support very rich ecosystems.

Very rich ecosystems that wouldn't exist without see floors for currents to uplift nutrients from.

So perhaps you might want to ask oceanographers what would happen if the oceans were tens of times as deep, or hundreds of times, or thousands of times.

I suspect that oceans so deep that nothing comes up from the bottom might support a lot less life than Earth's oceans do.

Looking at the graph posted by Jakob Lovern it looks like at around 0C the deepest ocean you could get would be about 100Km. Perhaps add heating from source as you descend and you could get that up to 1000Km. 1000Km of ocean is a pretty darn deep ocean with the bottom at 350C lol.

If you do have a thermal gradient life could exist that made use of the energy difference there. Long insulated tubes that allow warm water from below to rise up inside them extracting energy from the flow whilst filter feeding for proteins and what not. They could be something like giant trees and support an ecosystem at each end.

6
Could an atmosphere of neon, oxygen and carbon dioxide support life, and what kind of life could it support?
15
Is the bottom of the ocean a good place to make a long-term base?
5
Life on planet regularly hit with meteorites
3
If life evolved on a planet with two suns, one emitting in the ultraviolet and one in the infrared, what light would that life evolve to see?
1
What could be the energy source of a sentient, supermassive biological entity on an ocean planet?
2
How long a human being could live with stem cells?
5
What would Define Ecosystems in a “Frozen Moon with Ocean” World
1
How could space life deal with the cold?