How could a force field dome be realized in my city?

In relation to this question, how could I create a force field dome over that city?

Specifications of the city:

What the force field needs to do:

What is, as far as science gets, the closest to real technological solution? I want technical buildings I need to do this, I am sure I need some sort of pylon but what else?

If you're looking for hard science, you're out of luck: there are no known ways to create a non-material barrier that will stop projectiles or other large objects. You might be able to create a physical shield from steel or near-future composites that can be opened or closed as needed, but that would be a rather epic engineering project.

As far as hard science goes the closest you'll come to repelling large objects is warping space. Something along the lines of an Alcubierre drive I'd imagine. According to the wiki page it would exert large tidal forces. Tidal forces can get pretty scary (see Roche limit, keyword disintegrate). Of course that doesn't stop energy weapons but if your atmosphere has a decent amount of Hydrogen I would assume the forces exerted by the force field would produce enough pressure to make it solid. As solid hydrogen is a metallic superconductor you get your energy shielding for free: Faraday cage, high reflectance, perfect heat distribution, etc. As for the specific differences of the field and whether you would indeed achieve enough pressure is more maths than I care to work out. I am imagining a rotating field so that your tidal forces occur even for a direct shot.

This seems impossible with our technological level, but there's ways around those limitations if we give ourselves a bit of artistic license.

Here's my picture of the dome shape from your other question:

We need a force field to cover that are and be essentially impassable. I can think of two ways to do this - an actual plot-field, which would be hard to explain but actually is a "field" and an alternative approach using a combination of a physical dome, with gaps that it can fill with fields or material to give the same effect.

Since we need a force-field that would block everything, we basically need it to behave like matter. Very tough matter, but matter nonetheless. That means getting through the field should be no different than trying to break through titanium or something like that, albeit thick and tough titanium that can fix itself.

I don't know of any plausible physics that can create such a field - if we could do that, we could create matter out of thin air. However, we can assume you civilization has mastered the means of creating fields that mimic the way that matter works and can project them.

Considering the shape of the field, we'd have to place the generator very far underground to get the intended result (it's effectively a shell of a large sphere). We could alternatively place multiple generators across the city's foundations and create a composite field that would have approximately that shape, but that would be crude for someone who can already create matter fields and placing it underground gives the city the massive advantage of protecting itself from all directions even underground - in other words, enemies can't even dig a tunnel under it to get around the shield.

The problem is, we can't just have a spherical field underground because, to get this dome shape, it would have to be 72km underground: 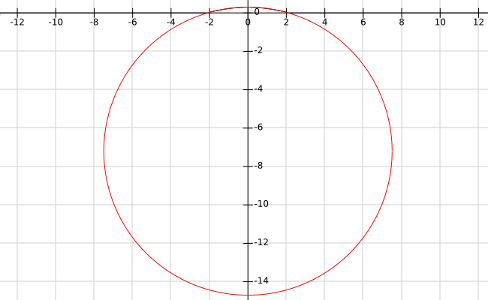 So we'll have to make it extend from a plane under the city, much like this:

If shaped this way, we can place a circular plate under the city about 900m, to give us the needed field.

It doesn't end there though because if we just have a field, activating it will affect everything in its range - it won't just create a nice dome. If this was designed the repel matter and we power it, it would make the entire city explode around it. So we need to carefully shape it.

Since we're assuming exotic fields that don't exist yet, lets assume an exotic mechanism for them to work by: they turn electrical energy into tiny vortices and give them spin, making them matter particles (that's pseudoscience technobabble, but hey, it's a force field :P). The red and blue fields create spin in opposite directions, so they cancel each other out. To create matter, they need to reach a threshold, so if the field strength is too low somewhere, nothing happens. By adjusting the red field's strength and compensating with the blue field, we can adjust the thickness of the field's dome.

Using this arrangement, we can cancel the field out inside and prevent the city from exploding. What form would a generator of this kind take? Here's an idea: 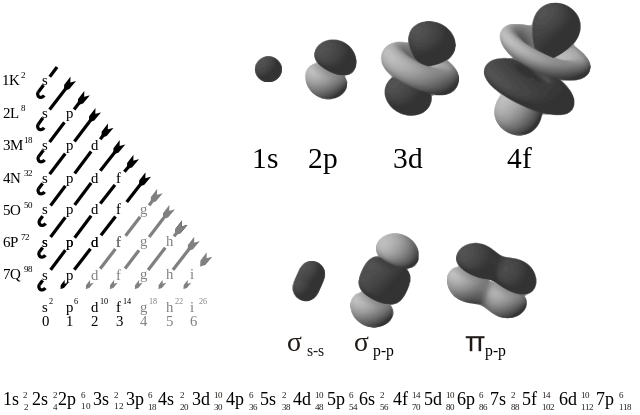 A probably preferable mechanical solution could be accomplished by having a deployable dome, that forms a mesh when deployed - then it fills the gaps with matter somehow. 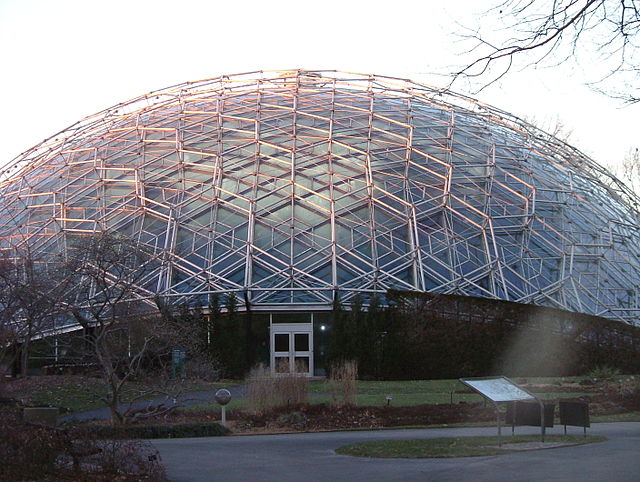 But of course, ours would be a lot larger and flatter. Your dome could deploy from the perimeter of the city and once in place, extend titanium panels to fill the gaps. Obviously, it would need some other form of exotic technology to expand so much - perhaps the city has huge stores of molten titanium under it and using some shaping trick it alloys the titanium with tungsten (to give it a higher melting point than plain titanium) and then funnels more titanium through the bars, suspending it through magnetism or something, until it cools into titanium plates.

Here you can use an actual physical field to act as a force field - in certain scenarios. Let's say you want to stop a single particle. What can you do? You can trap it. Not deflect it, in the sense you mean, but make it get stuck in a single point in space. Here's how:

If the particle has electric charge or is magnetic, you have a solution: Use an electric field to attract the particle. If this is the primary influence on the particle (discounting gravity), the particle will eventually stop moving in whatever direction it was going before and be "stuck" in the field. The same goes for magnetism - in fact, this might work better for larger objects.

Let's take a look at the requirements for the force field:

Lets face it: a single magnet at the center of the city isn't going to do squat to an object at the edge of that big an area. 400 square kilometers is nothing to sneeze at here. So you definitely need multiple magnets. My first thought would be to stick a bunch of electromagnets on pedestals around the area, but that's a bit of an oversimplification. Your everyday junkyard car-picker-upper won't do the trick. So we'll take a step up and go to superconducting magnets. These are a lot more powerful. They're also fairly big and need a lot of energy, so maybe we'll change the "pedestals" to small buildings, complete with a power supply.

The bit about the dome is tricky. A magnetic field permeates throughout all of space, but the field gets weaker as it gets further away from the magnet. In other words, having a bunch of magnets lying in a plane won't produce a lot of force on a particle somewhere above the plane. So in order to create a dome-ish shape, the pedestals should slowly gain in height as they near the center of the field.

So to create this field, simply mount a bunch (hundreds, if not thousands - I should have mentioned that earlier) of superconducting electromagnets on some pedestals of varying height throughout the city, hook them up to an enormous power supply, and turn the thing on.

A Dome of Drones

I will go with a very big swarm of drones, interconnected and fully autonomous.

Not strictly a "force field" but give answer to all requisites:

From the city, perhaps it will not even visible the composition of the dome or his nature.

Some kind of hangars should be placed somewhere (on top of the city wall?) to allow drones to charge / repair / replace losses.

Security experts recommend "Defense in depth", and "Multi-layer security". Plus, it makes the system more interesting to describe to the reader. So you could use several different devices or systems to achieve all your ends. While all a bit scifi-esque, here are some ideas at least a little less of a hand-wave than "forcefield".

block line of sight in the city

Does not let anything in or out when activated

"Anything" is a big word. If you nuke it, will it let the blast through? The radiation? sunlight? Air?

Inside flight implies that the smog idea either won't work, or will require flying by instrument. Shouldn't be a problem at this level of tech. Also requires friend-of-foe identification, again not an issue.

All these layers of protection would give you a super-well-defended city, but I suspect would be too much of an urban redesign. But some of them might be usable to beef up the defenses you take from other ideas, at least.

30
Feasibility of anti-matter as a fuel
7
How would a force field dome over a city affect the weather?
0
Force Field in Science Fiction shows and movies

5
Realistically calculating the movements of someone with super strength
4
A bit more effective force field
3
Could Carbon Nanotubes Be Realized Earlier?
4
Force Field Contains a Star
5
Can this ship exist within our current laws of physics?
3
Immune resistance to biological colonisation
9
(Somewhat) Realistic force field
4
What would be the ideal way to weaponize plasma?
5
Most realistic method of creating a city-sized visible force field