I was wondering if two bodies could be physically connected to each other such as the ones in the art I have attached. Is there any realism to it? 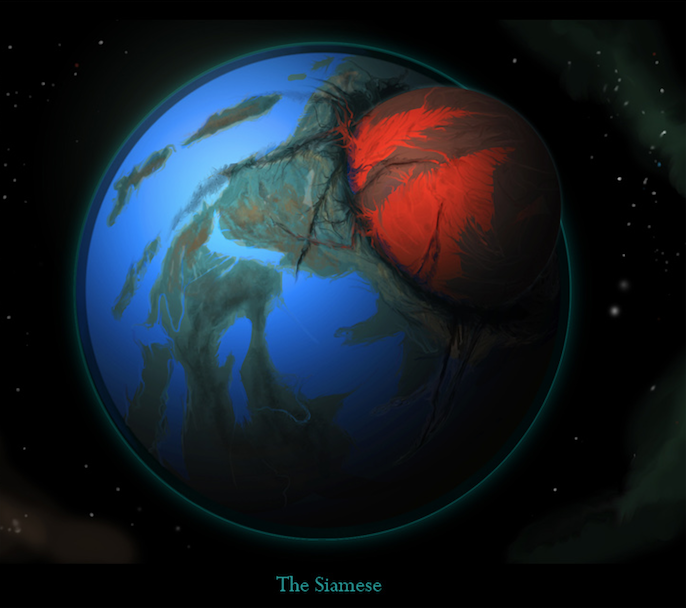 The two bodies are not joined. It looks like someone has stuck a smaller planet into the bulk of the larger one. The small planet is now effectively a humongously huge mountain. It will be collapsing under its own mass. All mountains are in the process of slowly collapsing. This is on geological time scales. This set-up will collapse somewhat faster due to its extreme instability.

Both planets will fuse together into a single body. Becoming eventually a spherical object in hydrostatic equilibrium. This is inevitable. It would be like a gigantic, continuous landslide with extra lava. Most definitely a more than Biblical catastrophe.

The embedded, smaller planet is far closer than the Roche limit where gravitational forces it tear astronomical bodies apart that get too close to larger ones.

If such a set-up could be created there would be some seriously interesting geological and especially seismological consequences. Seriously no-one in their right mind would want to live there.

Not for a planet, but for a smaller body.

Massive bodies are in hydrostatic equilibrium. Gravity pulls them into spheres, eliminating most non-negligible variations from perfect roundness. Obviously, protrusions like mountains exist, but they're minute compared to the size of a planet.

That said, smaller bodies may not be in hydrostatic equilibrium, and this sort of object can form. 67P/Churyumov–Gerasimenko, for example, is a comet that has a barbell-shaped nucleus. You could absolutely get a minor body shaped like this. 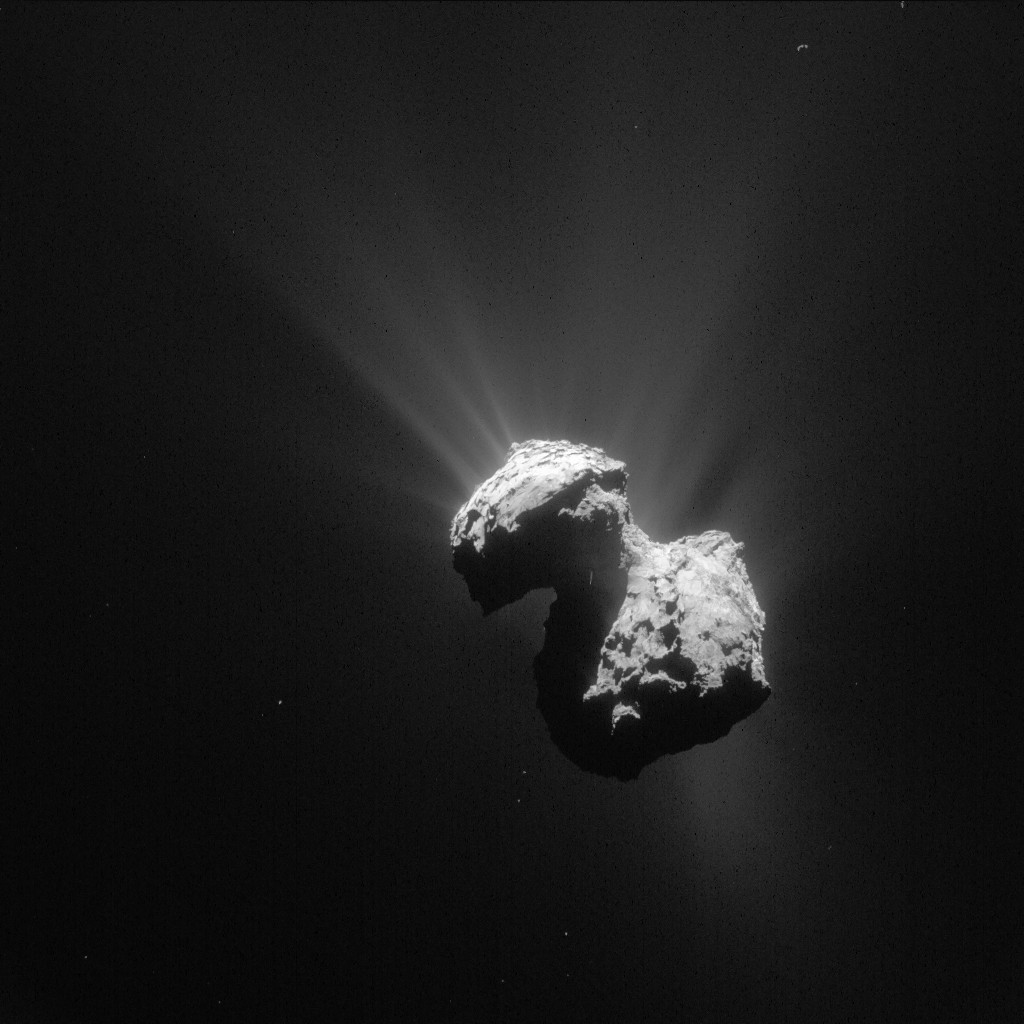 Image from the ESA, under the Creative Commons Attribution-ShareAlike 3.0 IGO License.

There is no way to merge while remaining solid

Obviously, this applies to large bodies only. But for the Earth, anything that large that hits it will melt much of the planet.

This impact is enough to heat the entire planet by 746 C. Ouch! Surely there would be lots of boiled off oceans, and rocks ejected into space and whatever as well.

The moral of the story is: no, your planet cannot look like that. If a moon sized object hit and Earth sized object, at the very least both objects would end up molten. Once they were molten, it would be an easy matter for hydrostatic equilibrium to pull them into a sphere. Either your moon impactor would 'bounce' and create a ring or moon around the planet, or it would merge together in one big sphere of hot lava. Also, definitely no oceans as pictured, those would be long boiled off.

Probably not, because the larger planet would rotate and make the smaller one rounded out and not a hump on it.

Not the answer you're looking for? Browse other questions tagged planets space moons .

6
How can two planets merge into another, bigger planet?
6
Gravity/Ecosystem on a peanut-shaped planet?

21
Hollow planet with another planet inside it
12
Could planets switch orbits like Janus?
37
Can 3 planets rotate around each other like this?
6
Feasibility of life/existence of a world devoid of transition metals
4
Space elevator into a blackhole. Possible?
0
A pair of similar celestial bodies coming near each other
4
Could co-orbital planets also be double planets?
13
What is the largest possible appearance of a celestial body in the sky?