Warfare on a "plane" of "islands"

In my question, a space fabric "plane" consists of many "islands" strewn about, and any point of the plane which isn't part of an island is "bottomless". The "gravity" at a point is affected by the curvature of the fabric at the point, in addition to mass.

Each island is "circular" or, to those inside, spherical with interior diameter 50 ly. The islands end asymptotically (the closer to the edge, the stronger the pull towards the edge and the faster the pull increases). Before the edge (i.e. slightly more inside) of the island, there is a border of "heightened" fabric (approaching the border, a ship would need to counter gravity). An island's interior is relatively flat (although there are some areas of slightly heightened or lowered fabric.

Travel inside an island is with FTL; it takes about 3 days to traverse an island (i.e. go from an edge border point to the opposite). To travel between islands, the inhabitants of Islandia use fabric-casting devices mounted on large ships (abount 1.5 km long at minimum), called fabric-caster ships (FC ships). When "on" an island, it lies on the island, but if it goes over the edge border of an island, it "takes off" with cast fabric (the cast fabric functions like a platform over the bottomless pit).

After that, they can't see outside their fabric "normally", but a FC ship is typically equipped with a navigation device to "see" islands (but not other FC ships; their fabric is too small to detect). They also can't communicate with an island until they "land" on it. If an FC ship's fabric-casting device fails while the ship is not on an island, the fabric is destroyed.

The islands are about 3 to 4 months apart.

A FC ship casts a fabric, spherical to those inside, about 50 km in diameter. Unlike island fabric, however, those fabrics end abruptly. Ships which travel with an FC ship travel close to it, to avoid falling off. Ship-cast fabrics rarely collide, because their heights usually differ. When they do collide, they destroy each other along with the ships on them. For this reason, FC ships adjust their heights so they're not the same as each other.

In the plane, there are two warring states (political entities). The territory of each is constituted of many islands, about 100 in number. There are 15 front islands on each side. Each side has about 1,000,000 military crafts (including support crafts, but not including fighters). The ships fight slower than light but can jump into FTL with recharge time 60 minutes. The weapons are mostly projectile weapons. Projectiles travel far below lightspeed (about 150 km/s on average).

I think the major problem which puts an attacking fleet at a disadvantage is that attacks are far-flung expeditions; maintaining a supply line that long is very expensive. The defenders have clear advantage. Another thing I thought about is if a side would attack the capital right away (fleets are hard to stop when travelling on cast fabric) or island-hop little by little starting with front islands.

In short, my question is

How would warfare be conducted in such a setup?

It seems like warfare strategy in this setup would result in a couple options, depending on how far the ships can travel outside an island:

"Trench" Warfare: As you said, the attacker is at a serious disadvantage since the distance between islands is so large, and all of the 'front' islands seem well defended. Because of this, warfare may result in WW1-style trench warfare: one side launches a massive attack with massive casualties, sometimes even taking full control of an island, but then they always need to pull back to either defend against the other side's massive attack or because their numbers are too few to defend the captured island.

Island Hopping: Moving from WW1 to WW2, Pacific-war style island hopping can be a viable strategy if ships can travel past the 'front' islands. Does the enemy have a heavily defended island but weakly defended islands behind it? The attacker can focus on taking the islands 'around' the defenders to cutoff supply and communication lines, forcing the defenders to either pull some ships back to protect these islands or allow the front defenses to weaken due to lack of supplies. Granted, this requires some supplies to be impossible to make on the front islands, like ship fuel or other materiel.

Guerilla Warfare: Moving from WW2 to more recent conflicts, asymmetric warfare may be a good option, again depending on if ships can travel past the front islands. Small scale hit-and-run attacks on supply lines, terrorist attacks on civilian targets, sabotage on factories, propaganda efforts to demoralize the enemy and cause unrest/revolts, all of which can be done when leaving the bulk of your force defending your front and can completely bypass the enemy front. However, this also means that counter-espionage and counter-terrorist efforts on your islands need to be as large or larger than your own attacks.

Overall, a mix of these tactics will probably be used as each side tries to gain an advantage and exploit the enemy's weaknesses. What each side focuses on really depends on what you want to focus on.

From The Art of War

Your attackers are in a similar position as the Crusaders in the Middle East. They are far from home. The best strategy would be to quickly move in and move in to stay. Govern the populace. Levy taxes. Fortify your position. "Captured soldiers should be kindly treated and kept". Then when the enemy comes, they are the attackers and you are the defenders.

Part of the reason the Crusader Kingdoms could hang on for as long as they did was the architectural genius behind the siting and building of their fortifications. 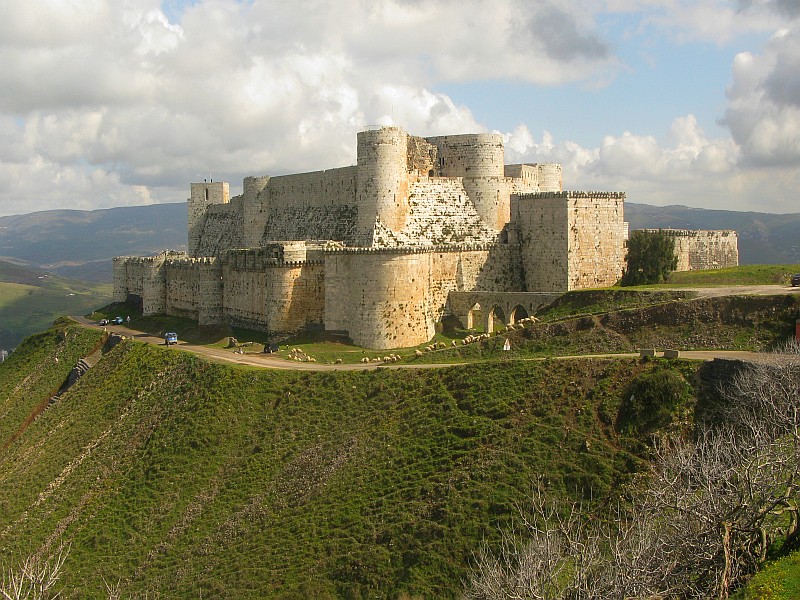 When the crusaders arrived in the Levant at the end of the 11th century, fortification was neither elaborate nor subtle. Based on the recently introduced Norman keep, it was essentially passive in conception. Though a keep was so solid that it might be defended by a single man, it could be besieged by two, one standing on either side of the gateway. The crusaders made castles offensive.

Their fortifications gave the Crusaders the defensive advantage - and castles were also used offensively - too complicated to go into here so check the link. Your trick: to translate this tactic into your unusual world of conventional and extra dimensional space.

Not the answer you're looking for? Browse other questions tagged warfare military alien-geometry .

54
How do I defend an island nation from attackers with 15th century technology?
49
How to add tactics and maneuvering into space warfare
19
What would physics be like in a wrap-around universe?
41
What kind of spells would magicians cast in combat if the fuel to magic is very expensive
14
Plausible reasons for use of combat drones instead of missiles (kamikaze drones) in space combat?
19
How can orientation-discriminating people keep their views when it turns out they live on a non-orientable surface?
29
Can realistic planetary invasion have any meaningful strategy?
4
My in-atmosphere traversible wormhole, does it make sense, and what propulsion is needed to gain access to it?