In my world, there is a chain of offshore volcanoes which are the result of a smaller plate hitting a larger one. There are two to three active volcanoes.

My question is: two of these volcanoes are close enough they are only separated by a narrow strait of sea, so would the volcanic activity from them, lava flows, hydrothermal vents, etc., be enough to turn the strait into a nearly boiling, seething sea of hot water? If not, what could? Or is this impossible?

For a practical demonstration, take a look at videos or pictures of pillow lavas being formed in Hawai'i. The divers are within meters of lava emerging into the water, and while the water in contact with the lava is clearly heated, the divers only a few meters away are in no immediate danger. An example: 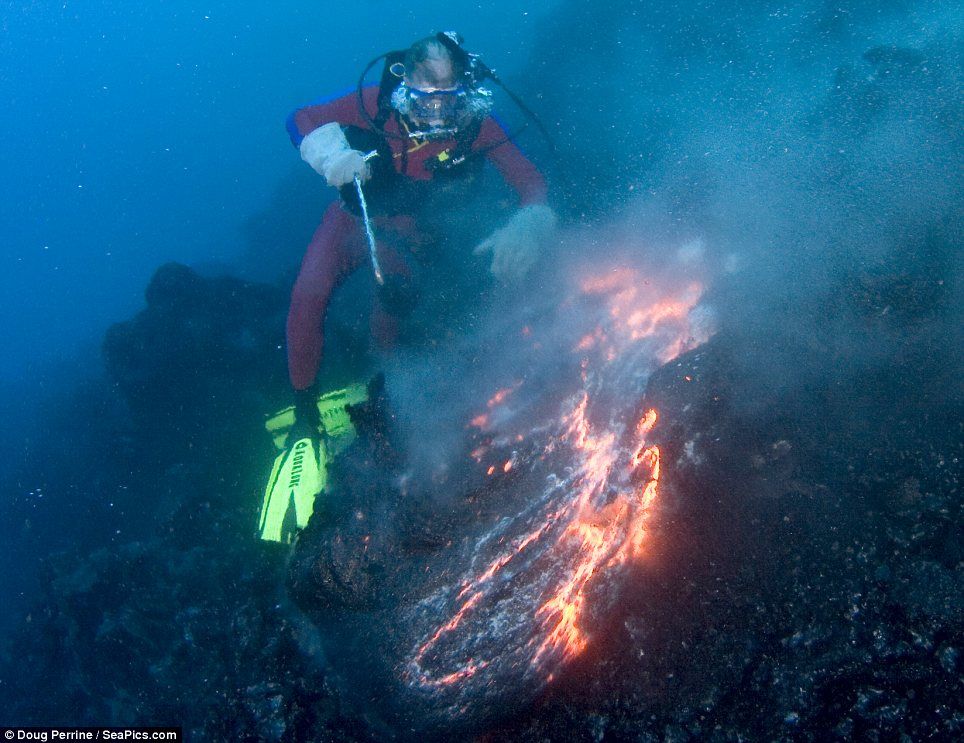 In order to heat a sufficiently large mass of water between the volcanoes to boiling, there would need to be so much lava outflow that there very quickly wouldn't be any water at all, but built-up emerged land.

Possible for a short time frame during an eruption event, but highly unlikely during a long time period.

little blurb I found through google on the cooling of lava: http://ffden-2.phys.uaf.edu/212_spring2005.web.dir/Philip_Fitzgerald/physics.htm

Water has a couple properties that leaves it quite unique in this space..it takes a lot of energy to warm up water compared to most other materials, including lava. You would need around twice as much lava as water to get the water up to a boiling point...and by that point the strait between your two volcanoes would be a filled land bridge.

Wind also comes to play. As it blows over the surface, water evaporates. The act of evaporation for water takes an incredible amount of energy out of the surrounding environment (blowing on your hot coffee is the same principle). So the water at the surface would be consistently cooled.

It is possible to have these conditions right for a short term eruption event to increase water temperatures, but nothing that would be permanent over a month timeline. You could probably make a few alterations (isolate this water from the ocean) that could make this scenario a bit more likely.

Geothermal activity other than lava flows could possibly provide your world with enough heated water and bubbling from escaping gases to present a warm body of water that has the appearance of boiling.

One place on earth that we see heated water bubbling and even gushing is Yellowstone. If your sea is shallow with a low flow of fresh water into the area you could have a warm to hot sea that has under water geysers and hot springs with escaping gases to look like it's boiling. Perhaps a few geysers blast enough boiling hot water to reach the surface so some areas will boil a person alive.

I agree with the previous answers in that lava coming out of an ordinary volcano could not do this. Unless you took Kilauea and multiplied it by 1000. However, a possibility is to have a lava flood eruption something like Laki in Iceland whereby instead of lava coming out of the top (or vent) of an on-land volcano, you could have a massive, continuous fissure-type eruption in very shallow water. This could be combined with your two flanking volcanoes.

As an aside, I suggest you go to Wikipedia to look up "hypercane". A pretty scary cool concept.

While previous answers have explained that this isn't viable. Do remember it doesn't have to be boiling to be deadly. Much lower temperatures can still result in humans and fish being unable to enter the region. It may also be deadly for other reasons like the volcanoes increasing the acidity of the water

Not the answer you're looking for? Browse other questions tagged reality-check geography ocean volcanoes or ask your own question.

16
Asteroid impact. How big does it have to be to globally affect plate tectonics?
4
Californian Yellowstone
15
Considerations for a Dwarven Volcano City
7
Three of the Four Kinds of Volcanic Eruptions…Underwater
4
Determination of reasonable volcanic island height from area?
4
Could Volcanism Provide a Large “Heat Oasis” in a Polar Desert?
6
What is the crust of a habitable planet with Io-like heat-pipe tectonics made of?
4
World with two directly opposed habitable continents, one hot one cold, with significant geographical barrier between them