Assume an Earth-like or super-Earth terrestrial planet in a state comparable to Precambrian or Archaen Earth. The atmosphere is mainly nitrogen and carbon dioxide, perhaps some methane, but very little to no free oxygen. CHON(PS) life has evolved and struggled, but that's about to change: something has evolved to make use of all that CO$_2$. With a twist.

What biological process(es) would explain why these upstarts take atmospheric CO$_2$ and retain the oxygen rather than release it to the atmosphere? To be clear, I'm proposing the Great Oxygenation Event be inverted, with a net loss of oxygen as it somehow is incorporated into organisms and then, over geologic time, sequestered as carbon was on Earth.

This is my first hard-science question, so if I've contradicted myself or overlooked something that makes answering impossible, point it out. This question appears to be related, but is not a duplicate.

Clearly, your planet has iron to burn!

The best analog for something that might happen is something that has already happened. The early Earth itself was covered in iron- Fe (II), to be precise. This caused a huge delay in the oxygen level increase. For about a billion years post-photosynthesis evolution, oxygen levels stayed low because the free oxygen being produced was essentially rusting the crust of the Earth. This is the source of the beautiful banded iron formations from the Precambrian Era.

However, this was a waste of energy. The reaction of oxygen and iron actually produces energy and some bacteria have developed a way to capitalize on that. Meet Acidithiobacillus ferrooxidans. It's a bacteria found on Earth in acidic environments that survives by oxidizing iron for energy, and is found in iron mines and in your car's tailpipe. It's an obligate chemoautotroph and thus gets all of its energy from this reaction, producing NADH from the electron gradient. From the Silverman & Lundgren paper in 1958:

[...] the energy derived from the oxidation of ferrous iron could serve as the sole support for the growth of a CO$_2$-assimilating microorganism

Sound familiar? I think it sounds a lot like what you're looking for to corrupt your Earth. This figure shows the chemistry involved- note that the O$_2$ is being taken up along with ferrous iron to produce energy (ATP & NADH) and water: 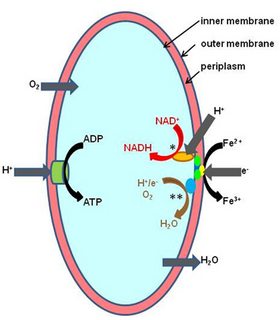 This chemistry only works under very acidic conditions. Fortunately, the early oceans were already quite acidic and with an atmosphere that's mainly CO$_2$ that'll get pushed even lower. Additionally, these bacteria are able to create their own pockets of acidic pH- one experiment saw them get as low as 0.5 units in culture. That's terrifying.

Also, I'm not sure how well this would actually sequester the oxygen. Assuming deep sea export, the iron oxide can be stashed for billions of years, but at a relatively slow rate.

If you don't like Acidithiobacillus ferrooxidans, there are two others that may be worth considering. Mariprofundus ferrooxydans is a common microbe at deep-sea vents, but operates at a neutral pH and doubles quite readily. It's so weird that it's currently in its own class (the Zetaproteobacteria) within the Proteobacteria phylum. The other option is the essentially magical Rhodopseudomonas palustris, which is both phototrophic and Fe(II) oxidizing. It also functions at near-neutral pH and is a decent candidate for an early life form in the Archaean oceans. There are others that do similar things, but R. palustris is my personal favorite.

The simplest answer to this is that the plants that conduct photosynthesis to generate O2 and Carbohydrates for their own use only generate sufficient quantities for their own metabolic processes.

Plants use O2 and CHO compounds just like animals do, for exothermic reactions that release energy they can use. Photosynthesis is an endothermic reaction designed to use energy (in the case of plants, sunlight) to reverse this reaction on grounds that there is no available O2 and CHO compounds for them to consume. On Earth, the plants just keep releasing this extra O2 as a 'waste' gas, because storing it for future use is corrosive and serves no purpose given that the plant can produce more than is needed at any given time.

If the Earth was further away from the sun, say on the edge of the habitable zone, AND there was a metabolic regulation system built into the plants so that when they had sufficient O2 and CHO Compounds they could suspend their photosynthetic processes (perhaps storing small amounts of O2 for night time and the like) then the great oxygenation event essentially wouldn't have happened.

There may be some loose O2 in the air (released perhaps by a dying plant when it's short term store is exposed to the atmosphere) but generally speaking, plants would have only produced what they needed.

This in turn would of course mean that your planet could only possibly support plant life; no animals.

Not the answer you're looking for? Browse other questions tagged biology hard-science xenobiology atmosphere biochemistry or ask your own question.

4
How would the Great Atmospheric Catastrophe come about?

13
Would the atmosphere of an alien planet with the following mixture of gases be breathable to humans?
4
Could a planet with three-quater earth gravity and neon-/argon-based atmosphere exist, and what would life do with it?
5
What compounds would be required for a photosynthetic reaction resulting in flourine gas?
26
Plausible biological alternative for normal photosynthesis
8
Ammonia planets
8
What could be used as an alternative to ATP in boron based biochemistry?
8
Are these atmosphere compositions for habitation in space plausible/do they cause problems I don´t see?
10
Could a singular planet have more than one diverse atmosphere?
4
Where to begin when designing functioning alternative biochemistry for alien organisms in non-earthlike conditions?