Do Adventurers Actually Increase The Number Of Monsters?

I just thought of something. Carnivorous and dangerous monsters are often depicted as common and dangerous enemies in fantasy, especially things like RPGs, but in real life herbivores far outnumber their predators. But what if some boost in prey levels caused their numbers to increase enough that they attacked a settlement to get more food, and the defenders slew enough to get the population back down? If that happened enough times, over a long enough period, might monsters start breeding faster, in general, to keep their populations going, creating a vicious cycle where the monsters breed quickly enough to justify being such a common threat?

To understand the reasoning behind this, one needs to think through the population cycles. When a prey species is rare, food and space are plentiful, and its population increases rapidly. Meanwhile, the population of predators that feeds on it grows only once the prey population is big enough to fuel expansion. When this happens, numbers shoot up.

Eventually, there are so many predators that the prey population crashes. But by then, the number of prey has spent several years at or near its peak -- leading to a rounded curve.

Faced with this dearth of prey, the predators must emigrate or starve -- either way, their numbers see a sharp decline.

@Lee Leon is correct in the comments. Nothing breeds faster in the absence of regular food. Lack of food makes it difficult to be a young animal because you are outcompeted for whatever food their is.

But a boost in prey, leading to a boost in predators, followed by a crash in prey could definitely lead to the starving predators moving to new areas and taking more risks. One reads about hard winters where the wolves come into town hoping to find an unwary human. Unless these predators find a new food source their numbers are going to crash whether adventurers take them on or not. But a cyclical burst of predator numbers driven by environmental factors is very realistic.

The idea that killing things makes them evolve is wrong. The cause-effect flaw in your premise is here:

"If that happened enough times, over a long enough period, might monsters start breeding faster, in general, to keep their populations going…?"

MUTATION, not genocide, is what makes a species change it's breeding habits. It would be pure coincedence that a happy mutation comes along just as your monsters were being driven to extinction, but fewer surviving adults means it's far less likely the mutation will find its way into the general population of your monsters.

In the lab when scientists talk about "forcing" evolution in a petri dish, there are hundreds (if not thousands) of more experiments where the organisms simply die. Scientists are excited because they were able to observe one beneficial mutation under a controlled environment but that was just chance, and the reason they use viruses and bacteria is that new generations come in hours, not years. Mutations are happening all the time, but of course the vast majority are not beneficial to the individual, much less the species.

Imagine a different environment, resources are scarce when the same mutation to breed faster happens. This causes physical stress on the mother who can't feed all the babies, competition among siblings who now compete for food and care, and leads to higher infant mortality and probably a shorter lifespan for the mother. In this situation, the same mutation is probably NOT a benefit to the species.

Over any amount of time that a civilization would still be living in more or less the same place doing more or less the same thing, evolution does not explain this fantasy trope. There is simply not enough time for any species to substantially change and adapt during the (let's be generous) five thousand years one fantasy city is still in one place battling local populations of monsters. This is even not taking into account the totally correct answer already provided here which pointed out that random mutation is what causes adaptation, not wiping out large numbers of a species (thus reducing the chance of that mutation).

What you might be looking for is the underlying assumption of a fantasy world. In our world, we are the absolute apex predator. Nothing can possibly threaten a population of humans except potentially some microscopic organisms, but even that would probably be temporary, since we have adapted to plagues before. In a fantasy world, this is not the case. Monster species are monster species because they naturally do not accpet mankind as the apex predator. They may see us as food, or they may see us as competition for the top spot, but in either case, they are more than willing to kill us because there just isn't enough room for TWO totally dominant apex predators on any given world.

Why would you have creatures like this mixing with human populations? Inevitably is would be because someone (either us or them) had moved from their natural habitat into someone else's habitat. In many fantasy worlds developed for RPGs, there are either ancient stories of humans arriving on the world they are on, or some kind of catastrophe that leads to widespread travel by various monsters from wherever they naturally occur to the planet in question. This is because it just doesn't make sense to have that many apex predators in one place at one time. Basically, you can think of this kind of like the demographic mechanism that led to the Viking invasions. Small pockets of fertile land filled up with people, there was a shortage of new land and an excess of young, ambitious sons, and expeditions started to go out to find new areas to colonize, settle, or just loot. Some similar mechanism could be forcing both the humans and the monsters into the same area from their natural habitats elsewhere. This would also explain the constant supply of new monsters when the existing ones are defeated.

If that happened enough times, over a long enough period, might monsters start breeding faster, in general, to keep their populations going

This question implies a teleological conception of evolution, where animals evolve to fulfill some sort of purpose. Neither animals, nor evolution, act with survival of the species as a goal; species moving towards higher fitness is simply an emergent property. Thinking of species "trying" to survive is, in some cases, a useful abstraction, but you need to avoid taking it literally.

One may initially assume that all adventurers come back alive, but if that was true then there'd be no status to the role as there was no risk. Insufficient adventurers to maintain the monster population would cause monsters to venture into farms and towns to feed causing a surge in the number of adventurers hoping to clear them out. Restored to their traditional diet, monsters would no longer attack towns.

Yes, this can happen. The coyote does this. When members of the pack are killed, it can trigger the females to increase the size of their litters, thus increasing the number of coyotes.

This graphic from the humane society illustrates how it works 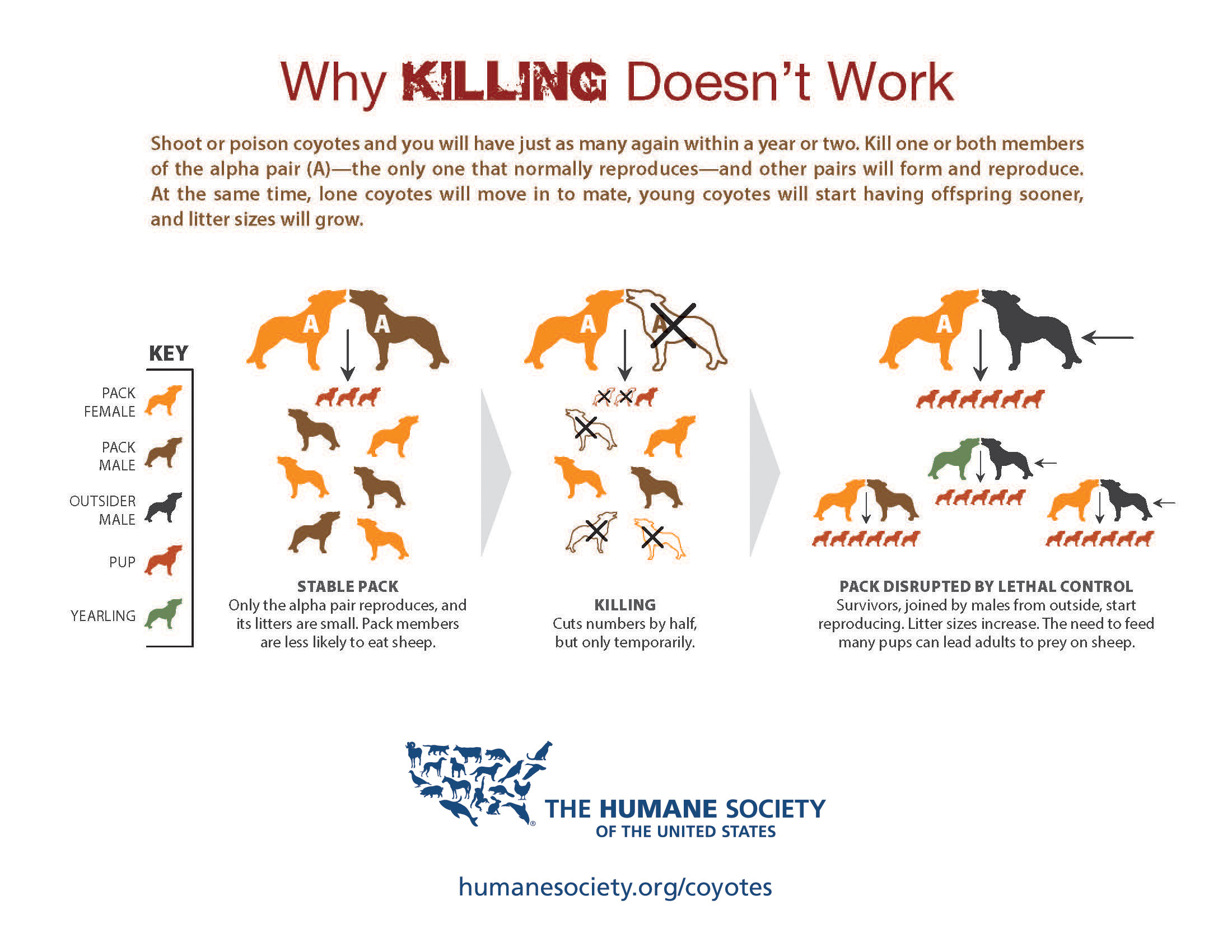 Obviously this is a very specific organism and it implies that the environment, food supply, etc are relatively undisturbed, or at least not so much that the coyote can't adapt (which they do extraordinarily well). But it could serve as a model for a monster that increases in population due to adventurers killing some of them off.

Most fantasy worlds have large areas of wilderness. As humans expand and tame this frontier, they would push all the beasties out, creating an artificially high density of monsters in the wilderness areas.

Some of these monsters might prey upon others, creating a surplus of prey and a population boom.

First I would clarify that a mutation for increased breeding occurring in response to increased predation by adventurers IS NOT NECESSARY for our premise. Rather, it is acceptable to assume sufficient variability already exists in the monster pop. For evolution to act on. So the question is, in the presence of increased predation, will genes for rapid sexual maturity and breeding rate outperform genes for slow sexual maturity and breeding rate? The answer depends on the nature of the monster, but the point is that if breeding faster improves survivability in a certain circumstance, then we would expect to see an immediate trend in the monster gene pool toward rapid breeding. We don't need to wait for a lucky mutation, variability already exists in the population and selection will act on it immediately.

You've got a big problem here: Evolution will have an opposite effect!

Adventurers generally kill monsters because those monsters are a threat to civilization. (Yeah, they want loot but that loot came from civilization in the first place.) If adventurers become a serious threat to monsters the logical evolutionary result is monsters avoid civilization. Any low-intelligence monster will evolve to run away from humans.

High-intelligence monsters may choose to raid civilization but they will live in locations very well concealed (probably quite remote) from anyone they are raiding.

What could explain increase in predator attacks on settlements is increased hunting of prey by people (we mostly eat herbivores, after all). This would leave less food for predators, and make them desperate enough to attack humans.

Also, expansion of human agriculture, mining or other ways to reduce habitat for prey.

Not the answer you're looking for? Browse other questions tagged biology evolution rpg or ask your own question.

32
Evolution of species with separate sapient and non-sapient forms?
15
How would martial arts develop in world with monsters?
4
How to realistically increase hair growth rate
1
How could stress possibly increase in a food-gathering population
21
How to increase the efficiency of lungs
2
How could overclocking the human body actually weaken my abilities?