Energy transfer to a planet far from its star [closed]

In future, before the destruction of the solar system, Humans have found a planet with mineral and element composition exactly like earth and they want to transfer all they need from earth to it, but it is very far from the star it's orbiting so that the star is too dim to be like the sun for earth. What can they do to increase energy received by planet from the star (and only the star)? They can't change the planet's orbit.

Put out a public tender in accordance with all the applicable norms and regulations of the Inter-World Bank, Inter-Stellar Bank for Reconstruction and Development, and the Star Federation, and contract a suitably chosen multistellar corporation to build two gigantic mirrors, complete with station keeping and orientation control mechanisms, to place them at the Lagrangian points L4 and L5, and to operate and maintain them for 2 millennia, with the possibility of extending the opearation and maintenance contract in successive 1 millennium increments.

The mirrors will collect starlight and reflect it onto the planet, as shown in the illustration below. 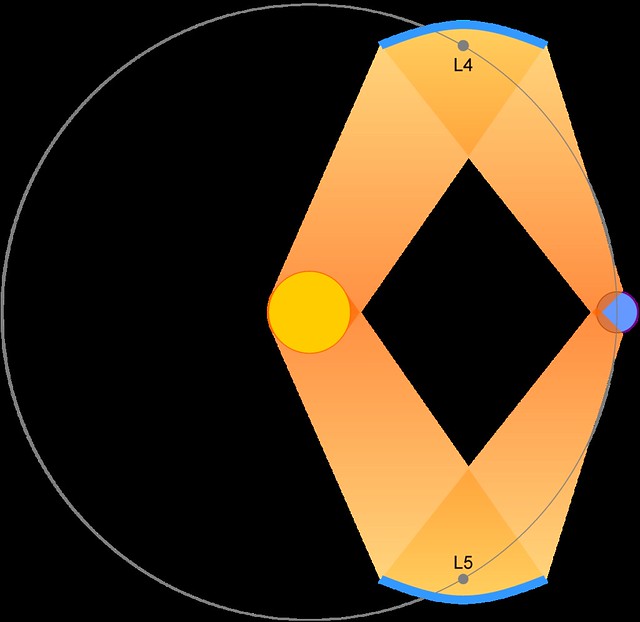 Two gigantic mirros at Langragian points L4 and L5 capture starlight and reflect it unto the planet. Illustration available on Flickr. Own work, published under the Creative Commons CC-BY-2.0 license.

Require that the bidders include in their proposals a complete and detailed discussion of the cost of designing, building, operating and maintaining the mirrors, together with an analysis of the savings resulting from the use of the proposed megastructures instead of mundane nuclear fusion reactors.

In the Instructions to Bidders document, make sure to stress that the solution must have a break-even time of no more than 5 millennia, assuming a modest 1.5% inflation rate and a reasonable 2% annual economic growth.

Rather than complain about the science, let's have some fun with this.

Yes, the actual science says that a planet so distant from its sun woulnd't be earthlike at all. But, let's assume we care as much about fiction as we do about science and jump to the conclusion that your explorers could quickly make the planet very earthlike if they just had more sunlight to work with.

Think of this as a mega-cool series of optics. Clarkian magic is necessary as it is required just to build the darned thing.

But the result is a concentrated beam of solar energy bookin' out toward the planet. It will disperse somewhat along the way, but when it arrives, it will provide the energy the planet needs. Not unlike using a magnifying glass to burn ants — except we don't want to burn the ants, we want to give them Mojitos.

Now that I think about it, what might be story-cool is to literally use optics such that every element of the swarm simply focuses absorbed solar energy to the nearest point along the ring. The ring then emits the light all along the elliptic of the planetary orbit such that the planet is moving through a plane of concentrated solar wind. To an observer outside the solar system, the star would appear to have a very bright ring fading into that elliptic. It would make a great piece of art.

You want to be very careful with this. If the planet is earth like, then suddenly increasing the amount of incident radiation by any appreciable amount is going to be Bad. If it’s more like a frozen earth then trying to terraform the whole planet will take a long time. In either case, I offer this solution:

Just ship a load of batteries.

Your hypothetical humans are thinking of relocating to another star. That indicates some serious space flight tech. You’ll also want to keep colony size manageable, either to avoid disastrous climate effects or because it’s reallly cold out. If you can move enough energy (in high density batteries, lumps of heated tungsten, however) from an inner orbit back out to your world you can precisely control the energy use and it’s fairly simple, as opposed to the high precision megastructures you’d need to change the incident sunlight.

Space stations in near orbit with solar panel farms or some other manner of energy packaging can offload batteries to energy shipping units, they fly out to the colony and swap the full batteries for empty ones, and everyone has power for heating/lighting/whatever. It may even (depending on shipping methods used, the state of your space flight/battery tech, how many stations and ships you have etc etc) represent a higher rate of energy input than redirecting a portion of the suns energy. It just arrives in discrete chunks rather than as a continuous rain of photons.

Never underestimate the energy bandwidth of a freighter full of batteries hurtling through interplanetary space at 70 Km/s.

Not the answer you're looking for? Browse other questions tagged science-based astronomy megastructures or ask your own question.

0
Energy planets, how to get the energy off it in an economical way

10
'star factory' that a planet orbits?
6
Radiation from binary star systems and how that would affect a planet orbiting both stars
16
How long would it take a civilization to see and understand a Dyson ring?
18
Can a habitable moon rely on the magnetosphere of its parent planet for radiation protection?
14
What kind of Gas Giant has a “safe zone” between the radiation from a star and the radiation from a gas giant planet?
3
Intelligent life wiped out in a binary system with a neutron star?
6
Is it possible to have a planet with earth-like mass but double the atmospheric pressure?
7
How far should second star be in my binary system?
5
How Would These Planets Affect Earth's Eccentricity?