The title says it all. How would one go about creating a planet with aliens that have medieval grade technology (windmills and carts and stuff.) No high level technology. However, I want the aliens to be capable of space travel. I feel like a portal of some sort might work but I really don't want anything magical; all science please.. Thanks :) 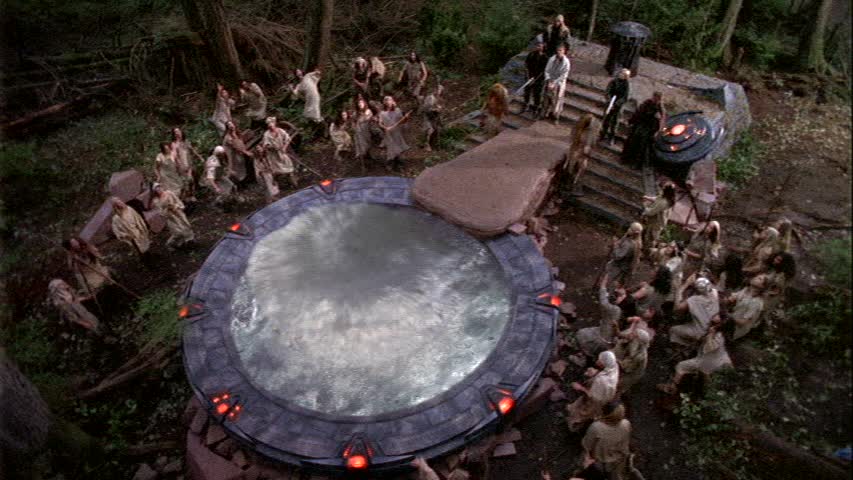 A long forgotten race of Ancients built a network of Stargates. They eventually evolved to a higher plane, but left behind many of their working portals to other planets. Subsequent species discovered the network, some of whom trafficked in less-developed species as slave labor.

Over the centuries the political landscape shifted and the parasitic species abandoned the planet leaving the primitive worker species to fend on their own. Eventually the primitive species discover the Stargate and conquer the galaxy with gumption, the spirit of friendship, and a series of unlikely scenarios where far more advanced societies are easily befuddled by aliens with only medieval technology and a simplistic understanding of science.

Wetcircuit has given a very good answer on the portal front, but a non-portal alternative might be that the alien world is in fact a very low gravity planet.

Imagine (if you will) that life formed on a moon that was around half the mass of our moon, orbiting a brown dwarf which in turn is orbiting a main sequence star. The brown dwarf still gives off some heat, which in turn is supplemented by the main sequence star for at least some of the orbit of the moon, meaning that it's possible that you could have liquid water, and therefore life, even complex life.

I say possible because many things would have to be in place to support this life, not the least of which is protection from the radiation from both the brown dwarf and the primary star; this is a very unlikely scenario but mathematically possible. To continue:

You only have to look at the Apollo lander launches to tell that the gravity well of such a moon requires FAR less energy to escape. Getting off Earth took a full 3-stage Saturn V rocket. Getting off the moon in the lander took an engine bolted to the bottom of the lander. On a moon with half the mass, the energy requirement would be even lower and could be possible with gunpowder technology. Is that medieval? Perhaps not European, but certainly Chinese.

You could then at least escape the moon's gravity well and orbit the brown dwarf, possibly explore a little more of this increasingly interesting solar system with probes and the like.

As for actual 'manned' space travel, this would also likely be possible because such a low gravity planet likely has a low atmospheric density, meaning you don't need a particularly strong pressure vessel to carry your crew. Blacksmiths were definitely a part of medieval society, and it's possible (although not perhaps realistic) that they could build a metal 'carriage' that could hold sufficient atmosphere for a limited journey, say a few orbits of the moon. That would still count as space travel, albeit limited.

I haven't run any numbers on atmospheric density, minimum mass of a pressure vessel, or even energy requirements for escape velocity, so I can't give you a specific boundary of technology or gravity well at which this all becomes possible, but it's certainly another option to consider.

The planet has been either visited or inhabited by a spacefaring civilization at some point in the past. Now only their machines remain, and at least some of those are still functional.

This is seen in:

A gift from the aliens

Aliens in a low-tech scenario are given the means to travel to space by a more advanced power.

Humanity is kept at a low technological level by a higher power. People may go to space if they have permission - or if they steal a ship.

And if none of those suit you...

The Discworld is a flat, discoidal planet. The various civilizations of this world enjoy technologies ranging from fire & wheel to victorian, averaging on medieval. In the second book, the astronomer-priests of one of the rim islands send a mission to space, to find out some important things about the underside of the disc:

Tumbling past, totally out of control, is the bronze shell of the Potent Voyager, a sort of neolithic spaceship built and pushed over the edge by the astronomer-priests of Krull, which is conveniently situated on the very rim of the world and proves, whatever people say, that there is such a thing as a free launch. (...) Plunging along some two miles above (...) is Rincewind the wizard, in what on the Disc passes for a spacesuit. Picture it as a diving suit designed by men who have never seen the sea.

If your planet is not flat, then you need at least two catapults. The larger one will shoot the smaller one outta the atmosphere. The smaller one then acts as a launch-stage and shoots the spacefaring vessel proper, giving it the delta-v it needs for a stable orbit or escape trajectory.

Building from the low gravity answer...

Imagine a bunch of rickety, wood and iron barrels sealed with pitch, exploding through the sky using Orion-project style propulsion that uses black powder instead of nukes. The barrels join up in orbit to form a shanty town of a space station. In the center are great brass chambers with glass skylights, some ornately stained with religious imagery, letting light shine down on farm plots. Many of these stations are destroyed by careless docking accidents, mishandled propellents, spontaneous decompression, and wood worms, but fortunately this race is as ambitious as it is prolific, and there are always more astronauts to send up!

Navigation would typically be a real challenge for such a primitive folk, but you don't need driving directions if you don't have a destination. These are explorers! Like the spores of a mushroom, they spread out in their rickety death traps across the cosmos, hoping to find a rock to land on. Many of these vessels wander the vacuum of space for hundreds of years, with generations of passengers living out their days in the cramped vehicles.

Would help if aliens had slow metabolism, high radiation tolerance, and healthy dose of crazy.

This is based on those little solar windmills that you can make (the ones that spin when they hit sunlight) it takes that same idea that makes those things spin and you make a sail out of it. idk how they get into orbit but once in orbit these sails can catch the sunlight like a sail boat catches the wind. the crews are exports at using the gravity of interstellar objects to speed around, but the craft itself would be carved out of a solid piece of obsidian (can't have air inside the walls because then it would explode)

I like the idea of a low-gravity world as a starting point for this, as well. The Saturn V rocket was needed in Earth level gravity. Earlier ideas included firing a person in something similar to a hollowed out cannonball or shell (shaped like a bullet, but huge), so this was the legitimate precursor to rocketry. A gigantic cannon capable of shooting a gigantic cannonball several miles was created in the 1600's, I believe, but had no practical military purpose as it could not be aimed. In lower gravity, something of this nature, with just enough modifications to actually launch people in space shells to other places could have been done. Remember that Isaac Newton and other reasonably advanced people lived before 1700, while the general level of technology was still comparable to the medieval age. To make the space shells more capable, and steerable, a secondary system of propulsion either of gun-powder or a Grecian-fire type substance could be implemented. It's hard to imagine any full life-support system other than captured air, but perhaps some native plant could be used to recycle the "stale air" aboard the craft. This would have to produce oxygen better than any known Earthly plant, including Devil's Ivy. The windows would also have to be thick enough to survive being fired out of a huge cannon. They are already over 1 ft thick on conventional spacecraft, but they must be thicker and made of more resilient glass. Silvering of glass should be viable, as metal-based paints were created fairly early. The spacecraft could be insulated with an asbestos like natural substance, like a natural ceramic wool. Imagine if our planet only produced "safe" asbestos. This scenario considers that some person is capable of scientific pursuits, and is fairly advanced in exotic subjects such as math and science in a relatively primitive world. The space program of such a world would involve king or queen type leaders with otherworldly political ambitions, other similar nearby low gravity worlds, and some early scientifically minded persons which are caught in the midst of it all as facilitators of these political ambitions. Like the politics of any medieval world, aligning with the political will of leaders is rewarding, and falling out of alignment with such political will is deadly. This could be motivation enough for early space travel. In all other respects, the world would be medieval, with castles, drawbridges, knights, and all the other typical medieval technology. Innovation can be very uneven if the results come from inspired scientists and highly motivated leadership. Perhaps an unusually high technology for the period such as a full metal foundry could be used, involving something like a blast furnace, for the express purpose of crafting cannon-craft and the associated cannons. The production of large metal objects was very difficult during the medieval times, but uneven development is always a possibility.

Not the answer you're looking for? Browse other questions tagged space aliens space-travel spaceships .

6
How can I explain space travel being accepted and supported in a typical fantasy setting?

104
Would relatively primitive people really confuse technology with magic?
5
How fast could inter-planetary space travel be developed?
9
Satellite salvaging: safely de-orbit and retrieve spacecraft or other objects
7
A way to hinder interstellar portalling? FTL travel
38
What could prevent us from making alien technology if we had the schematics?
21
Beyond Futuristic Technology for an Alien Warship?
4
What FTL models are appropriate given my constraints?
13
Interstellar combat without instant FTL