Could a solar flare create terrestrial areas of background radiation?

Inspired by this question from yesterday.

Solar flares can give off a large amount of radiation, but on Earth this is typically absorbed before it reaches anywhere but the poles, and even then only in very reduced quantities.

I was wondering if, in the event of solar flare activity that was powerful enough to at least partially bypass the defenses of an Earth-like planet, there were any scientifically plausible reason that it might do the following.

I'm guessing the answer to this is probably a hard no, but thought I'd give it a go and see what came of it. If the answer is actually yes, how big a solar flare would this require?

Edit: I'd also be fine with answers that incorporated a planet with an altered magnetic sphere, or even a flipping of the poles if either is necessary. Just so long as the planet remained Earth-like on the surface.

Irradiate parts of the planet below, making them hazardous to life.

without turning all of the land closer to the poles into a radioactive mess.

As others have mentioned, you misunderstand radiation. A hard blast of X-rays won't cause it's target to become radioactive.

Scatter these areas about the planet rather than simply sterilizing the whole planet.

If by scatter you mean "the side facing the star".

The flare must blast hard X-rays instead of the typical soft X-rays.

X-rays with high photon energies (above 5–10 keV, below 0.2–0.1 nm wavelength) are called hard X-rays, while those with lower energy are called soft X-rays. Solar flares only send soft X-rays.

Naturally, only one side of the planet faces the sun at any one time. Thus, the STUPENDOUSLY MASSIVE flare (a hypothetical X80 or higher) would punch through the magnetosphere and the X-rays would sterilize everything facing the sun, but nothing on the other side.

If it's only 20 minutes or so, the planet wouldn't have time to turn very much on it's axis.

The destruction would be felt world wide, though, because of trade, etc.

The classification system for solar flares uses the letters A, B, C, M or X, according to the peak flux in watts per square metre (W/m2) of X-rays with wavelengths 100 to 800 picometre.

Since the Earth's magnetosphere is not uniform, some areas will get blasted more strongly than others.

Hit areas closer to the equator with noticeable radiation

Unfortunately, the opposite will be true, due to the nature of how charged particles act in magnetic fields. 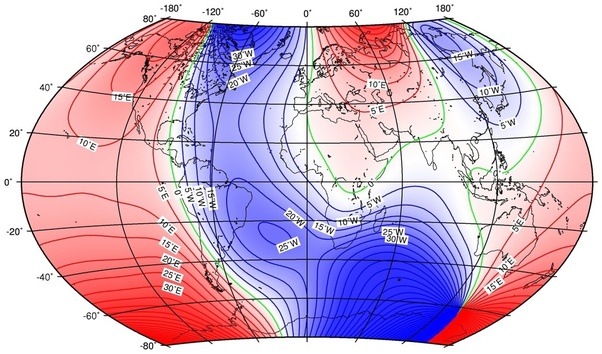 Unfortunately, your premise is flawed

I won't digress on the topic of magnetic shielding and the potential areas of effect, because the entire premise of "turning areas radioactive with radiation" is flawed (and a common misconception).

The fact is that there is a difference between radiation and radiation emitting elements. While solar flares give off large doses of radiation, they probably won't cause radioactive areas. The same way than getting an X-ray scan won't make you radioactive, although you were still irradiated.

You can create radioactive elements with radiation, for example, Carbon 14 being created from Nitrogen under the action of cosmic particles/solar flares (as @wetcircuit stated it in the comments, the correct terms are "induced radiation" and "neutron activation"), but creating such amounts as to create radioactive wastelands would probably sterilize the planet anyway.

Electromagnetic radiation, no matter the wavelength, is not bothered by the Earth magnetic field and it is, at most, absorbed by the atmosphere. This keeps off Gamma rays, X rays, UV rays. Mind however that none of these can induce radiation, but only ionization.

Charged particles are instead deviated by the magnetic field and mostly hit the poles. These particles are still dangerous, as they can damage all the molecules in a living organism, and accumulation of this damage can be fatal, either in short or long term. Still they cannot induce radiation.

If the Sun magnetic field is so strong than can significantly perturbate the Earth magnetic field, it may be possible that a significant flow of particles hits not only the poles but also other areas.

Just based on my gut feeling, I have the impression that in case a solar flare is powerful enough to shower the Equator with charged particles we should be concerned about our entire atmosphere being brushed away, rather than a bunch of particles hitting here and there.

Okay I'm not sure what size the flare would need to be apart from "big" really Really big; possibly too big for a star like Sol to produce, although there are some oddly flat areas on the moon that suggest Sol can produce some huge flares.

The important thing is if you had a flare large enough what would it do: you'd almost certainly find that the damage was pretty one-sided, as in occurs on only one side of the world, worst at the equator distributed in an egg-shape. The short half of the egg will be in the hemisphere where it is winter the long half extending into the summer side, and the damage will be isolated in a thin strip near the noon line at the time of the flare.

When it comes to lasting irradiation of the surface you need to look at the geophysical make-up of the area effected, soil and vegetation will erode away after the event and take radioactive material away but where bedrock is close to the surface and absorbs a large flux of charged particles and fast neutrons it will remain in place much longer giving off radiation to it's local environment and generally being unhealthy to hang around.

A flare big enough to punch protons and neutrons through the atmosphere in those quantities even across a relatively small area is going to be catastrophic. There will be some variance of the shape of the radiation burn-through due to magnetic field strength variations for example a major flare hitting the South Atlantic Anomaly will do far more damage than the same flare in a location with full field strength.

Not the answer you're looking for? Browse other questions tagged science-based space solar-system magnetism radiation .

0
Could the cosmic background radiation solve the Fermi Paradox?
4
How extreme can I make an altered solar cycle without destroying an inhabited world?
4
Could plant life evolve on a world with a toroidal magnetic field?
5
Solar flare prevention
14
Inducing a Solar Flare
9
How do I design the solar transit of a hot Jupiter?
8
Effects of Red Dwarf CME (Flare) on Biological Life and Atmosphere
9
How would one get a small moon spinning?
1
What are the upper and lower year lengths for a habitable planet of 40 Eridani A?
6
How would a civilization protect a Dyson swarm from solar flares and coronal mass ejections?