Artificial sky and sun for underground and remote colonies

I has this idea for quite a while. I searched for information on the internet but I could see no reference. All searches gave results on the same idea but the effect was not what I'm looking for.

The constraints: a space colony on a planet away from its star, an underground colony or a hostile climate may create discomfort to colonists who desire a 24-hour day-and-night cycle.

The idea: To create a dome which mimics the blue sky and the cycles of the moon and sun. It uses the planetarium dome with some changes. The dome may or may not cover the whole colony, depending on building constraints: Underground/undersea domes will only cover the smaller gathering areas and garden areas. Some private houses may have smaller, private domes on their "balconies".

How it works: I thought of using a planetarium dome. A projector at the center will project a scenery with blue sky, clouds and the moon. A strong spotlight shoots a strong beam that will radiate light once it hits the dome. The dome is made out of unpolished aluminum. This is highly reflective but not mirror-like, allowing scattering of light from the dome, mimicking the sun. The light source on the dome is concentrated enough to make objects cast shadows. Spotlight and scenery may change colors to mimic sunrise, sunset and seasons. Seasons are important if colonists pursue their hobbies of raising plants and animals they brought from Earth, and which depend on the seasons. Domes designated for food culture and recreation may have a more comfortable weather year-round.

Question: Is this dome worth spending some time under it? Does it create the effects that I'm looking for? I'm aware that an aluminum dome above a garden area must be proofed against humidity, corrosion and mold, and cleaned regularly, but does it create a realistic day-and-night cycle?

Switch the projection to actual lamps, it would be more believable and require less power than your bounce-light on an aluminum ceiling. Stars can be point lights. The sun would be a bright lamp on a track which could cast shadows. Existing technology would probably use a plasma lamp for the sun, or a high-intensity discharge lamp.

Unless you need the sky to be ever-changing, and occasionally replaced by advertising or psychedelic visuals, or it needs to be reconfigured instantly to some other sky complete with different star patterns and a sun that can be positioned anywhere (or three suns on Thursdays), I don't see the advantage of one central lamp and a silver screen for the entire sky. I think you are better off with individual lights attached to the dome, and a mechanical track for the artificial sun.

Instead of aluminum, the ceiling could be made from a nano material that can alter the spectrum of light it reflects, this is called structural coloration, and it's the reason peacock wings reflect an iridescent blue color despite having brown pigments.

The novel Steel Beach by John Varley uses something similar for artificial skies in underground moon caves. However I believe his "sun" was a burning nuclear something-something on a track (it has been a while since I read it and he is not the most science-based author in the universe).

An artificial sky is a great idea, psychologically being able to see the sky is a big deal, especially on the span of years or more.

How to do it better

1. If they paint the ceiling with semi-reflective blue paint it will save a lot of energy, and make engineering easier since they can use multiple diffuse light sources for most of the sky (everything but the sun). You don't need to see the sun all the time, a brightly lit blue sky is more important. Of course you can still have a projected sun and stars. Just having bare aluminum is just asking for corrosion issues.

Clouds. clouds are not necessary but if you want them their are two ways to achieve it. In a large dome clouds may form naturally, if not cloud machines are a thing.

2. Alternatively if you have tunnels instead of a dome, you can put fake sky lights in the rooms. these can be painted surfaces or low resolution screens. This may a be a good idead in out buildings or larger buildings anyway. 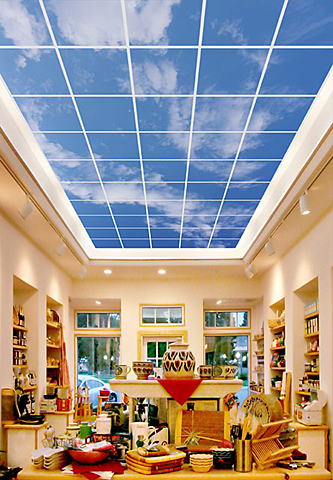 On many planets you will require domes anyway to maintain a habitable atmosphere and protect from radiation. When you already have them anyway, then spending the additional resources to make them look like Earth's sky isn't that big of an investment.

Is it worth the time? Likely yes. Many space colony concepts focus on the physical needs of the colonists, but psychological and aesthetic needs often get neglected. Winter depression is a common condition on Earth caused by not being exposed to enough natural sunlight and not seeing a clear sky for several months. It has measurable health and economic impact. Living their whole life under a grey steel dome would have even worse long-term effects on the emotional well-being of the colonists. So simulating Earth's conditions not just physically but also aesthetically might increase productivity and reduce suicide rate, especially among newer colonists.

People don't need an imitation of the sky to have a day night cycle. Due to my aversion to ultraviolet alight I keep the blinds closed all the time in my room, for example. In many parts of the colony people or automatic timers will simply turn the lights in rooms and corridors/streets on or off, up or down, to fit the time of the artificial day cycle. Perhaps there will be light wells or courtyards with large lights working all the time and people will open shades or shutters in the "morning" and close them in the "evening" to change the light levels.

But public areas (and private areas in the homes of the rich, if any) could add to their attractiveness with domes showing day and night sky images. Any type of park or recreation of outdoors on Earth would benefit from a more or less realistic sky.

Farming food stuff can be in basements with artificial lighting from many light sources. This way your dome will be dedicated to living space, parks, decorative gardens. Those would or could have their own lighting from lamp posts, or similar.

Dome material should be something along the lines of movie screens:

"Pearlescent is probably the most common choice for a typical movie theater. To make a pearlescent or silver screen, a reflective coating is added to the matte white vinyl. A glass bead screen actually has thousands of tiny glass marbles embedded in a transparent coating on the surface of the screen."

You would want to aim for an Imax Dome configuration with the screen being mounted on a frame that leaves space between the solid dome and screen frame for things like lights, possibly sprinklers that bring rain...

Imax Domes are very similar to planetarium domes, just angled a bit but using very similar projectors to light up the dome.

There are also screens which have tiny holes, those holes would allow for back lighting where you could feasibly use LED lamps to tint the dome in various colors of the sky from shades of blue to simulate a clear day to purples, reds and oranges to mimic sunset/sunrise.

You would do better with a projected image of a sun and use behind the screen lights to brighten the area.

As for the gentle heat of a summer sun... I have no idea how you would manage that. UV lights behind the screen to react with the people's skin for tanning may not happen, but you might be able to give enough good UV to prevent Vitamin D deficiency. I don't know if that would be practical or if just having people spend time in tanning beds would work better.

There are limits to imitating a real sky. However the dome screen could be used for other projections and light shows which no worldly sky could have thus making up for 100% imitation of "real" sky.

Of course being basically a planetarium dome the night sky would be spectacular, brighter and even educational with line connecting stars in constellations, or showing Old Earth constellations, or nebula, or any manner of cosmic wonders.

Not the answer you're looking for? Browse other questions tagged space-colonization architecture simulation or ask your own question.

19
What would be the most viable form of government for the first space colonies?
2
Why build a datacenter with an awsome view?
9
Habitable environment on a big moon of a gas giant lacking magnetosphere
9
How to Effectively Collect and Recycle Space Junk?
10
Would that heat-engine provide power to the colony on Titan?
6
Environment/Ecosystem for a “Sunfall” colony
4
Would living on around Alpha Centauri change how our eyes see color?
8
Water-filled domes as space habitats
15
Population Size of a Colony With a Large Gender Disparity
9
How long will it take for the off-World population to exceed Earth's population?