A ribcage capable of surviving the bite of a Tyrannosaurus Rex

What existing material (e.g. 410 steel, no unobtanium) and what thickness should the ribcage of a creature (of humanoid size and shape, let's say it's a genetically-engineered human) have, to survive the bite of a Tyrannosaurus Rex?

The bite's strength can be up to 430,000 pounds per square inch in certain areas.

Deformation and breaking are allowed, but it has to hold enough to keep the organs inside from being turned into goo and killing the unlucky individual.

I know that the poor guy is probably dead even with his ribcage having resisted the bite, but I'm interested specifically in the ribcage and the organs inside. Death by bleeding and other non-ribcage damage can be ignored. Please do not try this at home. (... please do not even have a T-Rex at home)

Pressure at a point is not important

You mention that the bite strength is 430,000 psi. That isn't a bite strength, that is a bite pressure felt at a tooth tip. Two things are relevant here. First, that that amount of pressure will dent just about anything. Second, that amount of pressure will surely dent tooth enamel before it will dent a hard modern steel. So, the pressure you quoted will be doing more damage to the T. Rex's teeth than to any metal structure that I'm about to discuss.

How to see if an item is damaged

This can do a lot of damage. On page 12 here, there is a list of materials and their yield stresses in MPa. The pressure rating is calculated by dividing the bite strength by the cross section of the material being bitten. If T. Rex bites a standard brick (yield stress 50 MPa), the brick's width and height are 0.089 x 0.064 meters, or 0.0057 m$^2$. Divide the bite strength by this cross section and you get 10 MPa. So a T. Rex can't crush a brick outright, probably.

However, this is only crushing. There are various other way to destroy a brick. The same table shows a brick's tensile strength as 7 MPa. The same force applied in tension could pull a brick apart. A T. Rex can't quite do that motion, but it can apply a shear stress to the brick, and probably would since its teeth are lined up to shear; i.e. the teeth don't touch point to point. So if the T.Rex bit a brick, the local stresses between teeth would create powerful shear forces and overwhelm the brick.

What can survive a T. Rex bite?

T. Rex isn't so strong compared to a car

So you can see that the stress a car bumper faces in a crash is going to be much higher than anything a T. Rex can do. If you look at the structural components of your car's bumper, there really aren't any solid metal components over 2 cm in diameter, other than the car's frame. Having been in a few accidents, a few car to car impacts at low speeds (> 20 mph) won't really bend the frame, at least not much. Since these slower impacts are roughly equal to a T. Rex's bit, this passes the smell test as reasonable.

A 1 cm radius steel rod made of the same material as a car frame should resist a T. Rex bite pretty well. Overall, given the energy comparison in a T. Rex bit and a car crash, the materials and design of your car bumper should be up to the task of anti-T. Rex armoring.

Ankylosaurus was the contemporary of T-Rex, and was armoured to protect itself from just this sort of thing. The protection consisted of closely spaced bony growths on the skin, apparently connected to the bone and musculature below with strong connective tissue (so an attacking dinosaur could not simply rip the protection off). This was supplemented by being low to the ground and presenting a large, convex surface overall, which would probably make getting a good bite difficult for T-Tex (especially when the target is moving and swinging a tail club to defend itself). 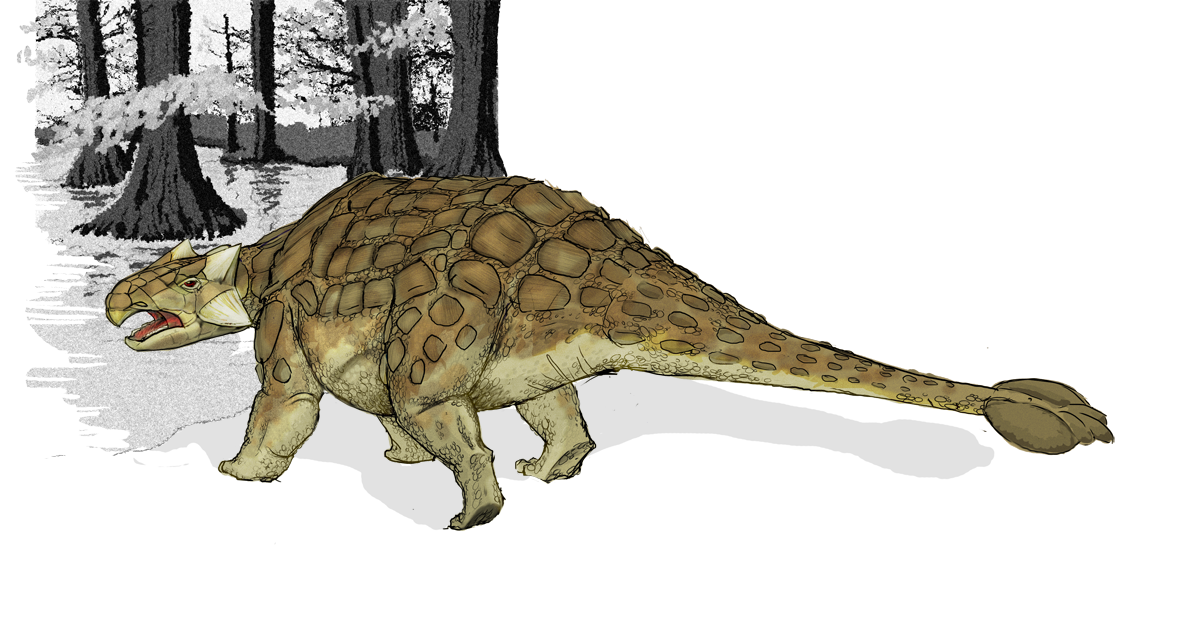 Modern reconstruction of an Ankylosaurus

Turtles are another ancient species (actually predating T-Rex), but have evolved a similar solution. In the case of turtles, the ribs themselves have evolved to fuse together to form the protective shell. While so far as known, turtles, tortoises or terrapins were not hunted by T-Rex, giant crocodiles and other large predatory dinosaurs and sea creatures existed that did prey on turtles, so evolving a hard shell was obviously advantageous to the ancestors of modern turtles. 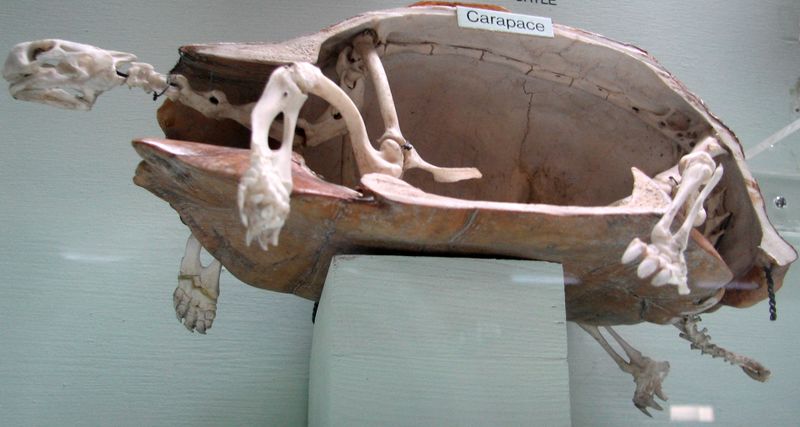 Example of a turtle's shell

If turtles or their relatives were being targeted by Tyranosaurs, then they would quickly evolve proper defences to prevent themselves from being eaten (too often), such as larger, flatter shells to provide less traction for a bite, heavier shell construction or even modifying the rib bone which make the shells to create a sort of framework. If we imagine the cross sections of the ribs evolving into a "T" configuration, the armoured upper portion still provides the protection, but the projection parts below can attache differently to muscle and connective tissue to distribute pressure better, and these lower parts of the ribs may eventually evolve to fit together to create a pattern like the interior of a vaulted ceiling in order to provide more mechanical support against high pressure loadings: 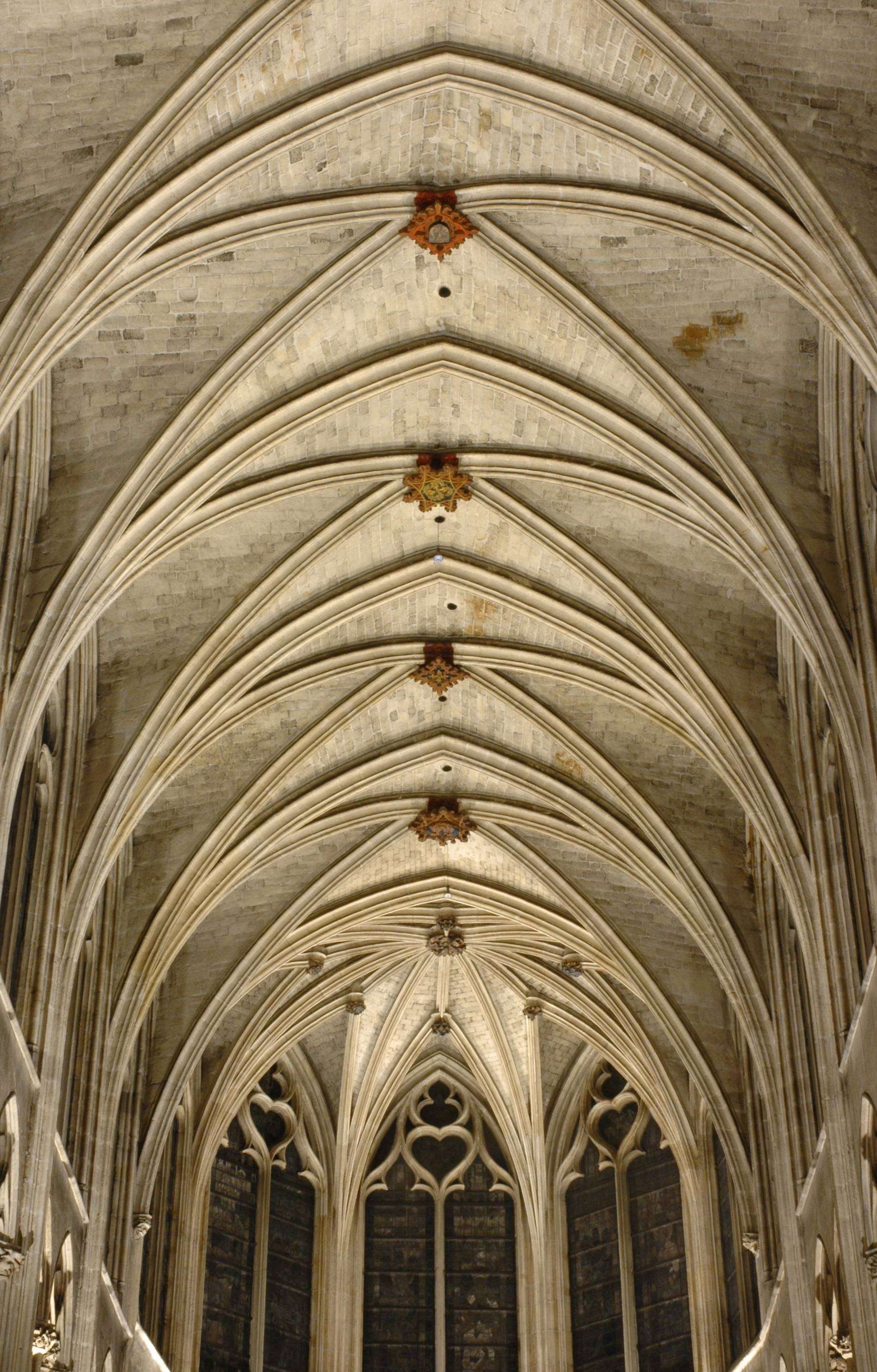 A vaulted ceiling. The internal structure of a T-Rex proof turtle shell might resemble this

The disadvantages of these protective measures is they are heavy and inflexible. They require a lot of energy from the creature carrying them, and make it harder to compete against other creatures in the ecosystem exploiting the same niches. Some creatures will be large and aggressive (like Triceratops), while others may be moving in vast herds for protection, and rely on speed (like Hadrosaurids). Slow moving, lumbering creatures will be at a disadvantage in such an environment, and indeed Ankylosaurus seems to have been a fairly rare creature based on the number of recovered skeletal remains.

Not the answer you're looking for? Browse other questions tagged science-based reality-check physics materials dinosaurs or ask your own question.

6
Ways to make a creature immune to bullets other than bulletproof skin?
5
Solid ribcage humanoid

2
Vampire--The Simian With a Canine Bite
10
Preventing the instantly lethal zombie bite
119
Releasing a T-Rex into a modern ecosystem wouldn't be that bad, right?
1
Can a character raise a T-Rex from an egg and have it be tame?
9
How to trap and kill a T-Rex-like creature?