The shortest possible distance between a boreal area and a hot desert?

Let's assume a planet like ours, same size and same conditions. My characters live at approximately 60° North, in a boreal forest, with a climate much like the Nordic countries in Europe. They are travelling south and need to encounter a hot desert much like Sahara. This desert has to be placed as close to the boreal area as possible and still be believable as a hot desert. I've done some research and the Gobi desert, which is placed at ~45°N, is too extreme with temperatures as low as -40°C during winter nights and as hot as +50°C during summer days. This could be a good starting point, though, if it's possible to have a desert approximately this far north but make it less cold during winter nights (let's say no colder than -5°C).

Any factors that is true on earth, like warm or cold air and water currents, could play a part in bringing these biomes closer together.

I am looking for:

(I am new and I hope this belongs here and not on the Earth Science site.)

I can think of a few places where you have desert and forest near one another.

You may or may not get the TYPE of forest you want but these can serve as models for you to work from. 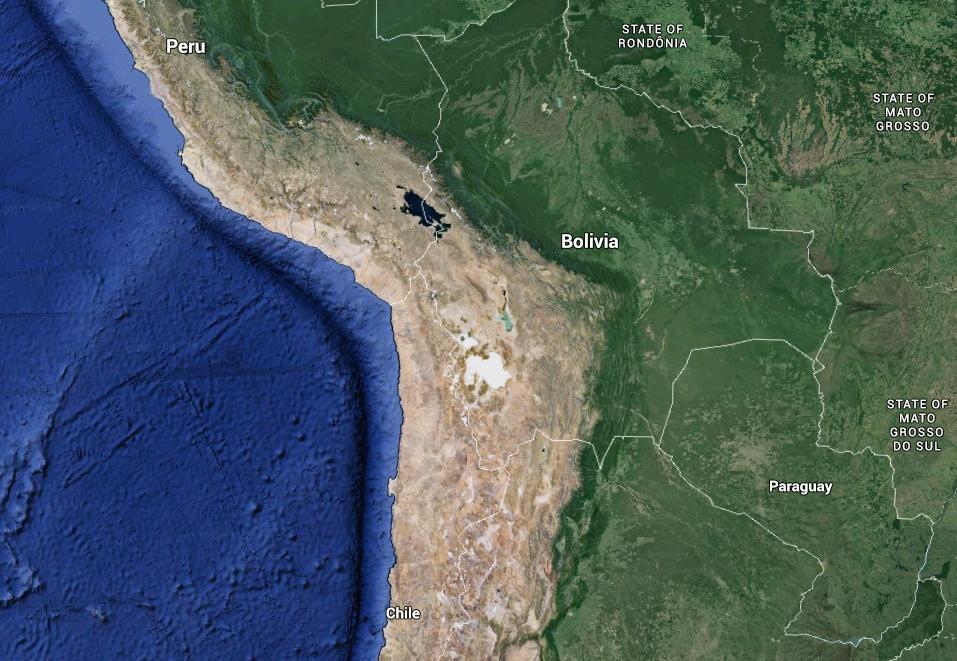 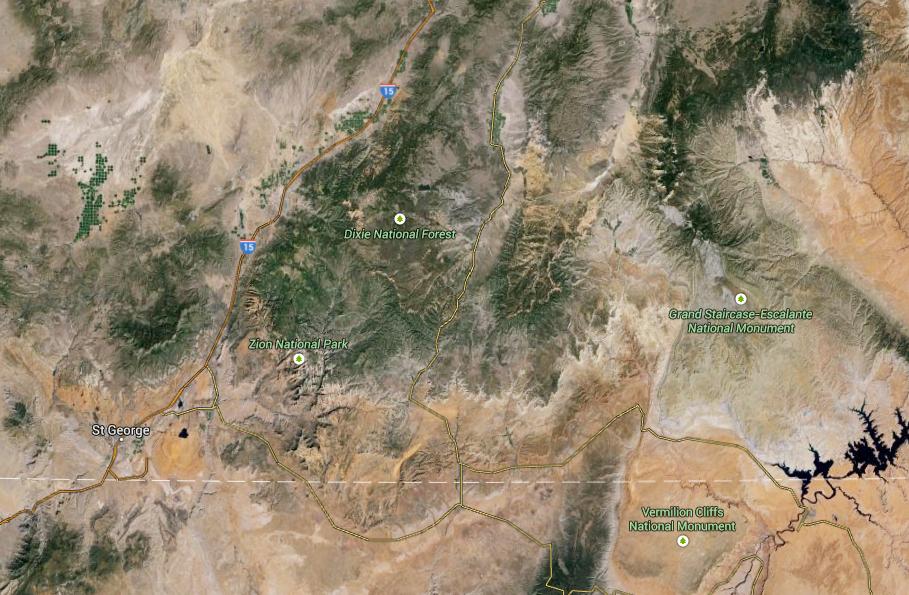 These are the two key factors to get what you are looking for. But as mentioned in other answers, the temperature swing in deserts from day to night is larger than in any other habitat, you simply don't have anything to stabilize it (water, trees, etc). Water also helps normalize temperatures a bit.

Have them encounter a Pumice Desert

The type of dirt can change the overall environment drastically regardless of weather.

I was up in Crater Lake a few years ago and as we drove from the still snow covered Alpine we suddenly found ourselves in a vast Pumice Desert. The otherwise forested region came to an abrupt halt where the soil turned to sand for miles. Nothing can really grow there, as the entire valley had been filled thousands of years ago with pumice rock up to 300 feet deep. 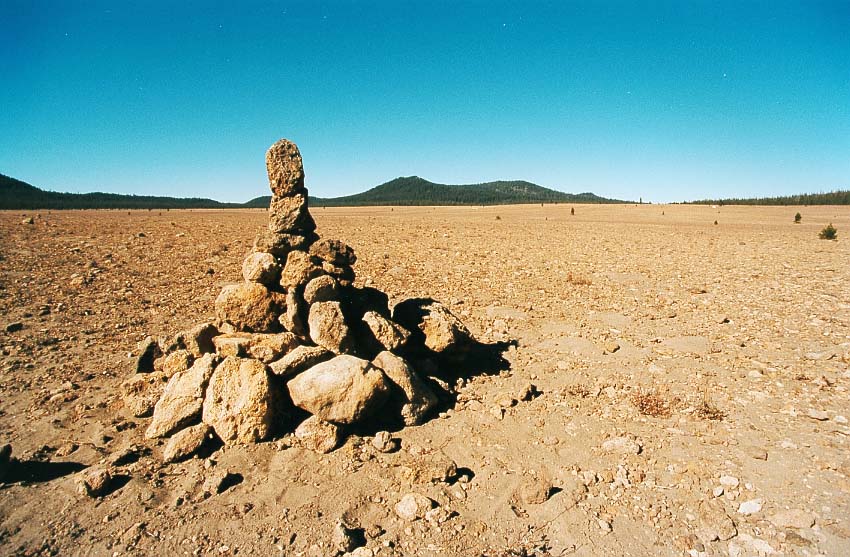 If you are looking for the ABSOLUTE SHORTEST way to change a forested biome into a desert, go with a drastic change in soil. And if you want to keep it warmer than the immediate area, change its rock color to something more like the Shasta Lava Beds. And to further increase the temperature there year-round, lower the elevation of this desert to below sea level. 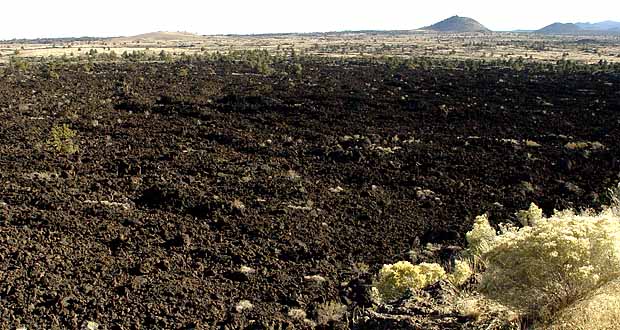 But deserts get cold at night, all of them. Even Arizona deserts get down to -5C in January. Moving deserts north is going to make this worse. The reason is deserts have so much sand and is an excellent insulator/reflector. It's gets hot when the sun shines and quickly releases it's heat when the sun goes down. The cold is almost as dangerous to those traveling across it as the hot days.

I don't think you could get a better example to work with than the Gobi Desert.

One idea to make it 'less' cold at night would be to have the sand be black basalt. It would absorb heat all day (making it worse) and take longer to release it at night, so the temp wouldn't get as cold by morning than otherwise expected.

How large does the area need to be, are you traveling four days across it, two weeks? A month? I'm not sure I can provide a good answer for a very large desert, but in my travels I have found a small desert (that used to be much larger) in Southern Manitoba. (Latitude = 49.666)

It is called the Spirit Sands. It used to cover an area of 6,500 km, now is about 4 km across and took 5 hours to hike on a brisk September morning. 6 am was around -2 (cel) and 10 am was around 8/10 (cel). The surrounding geology is an area known as The Canadian Shield, a large rock mass. It is very diverse terrain, tons of quartz, and as well mostly boreal forest. This boreal forest extends thousands of kilometers north and east, it gives way to the (flat) prairies to the west. Edit And the Rockies are further west past that.

It was a large river basin that slowly drained giving way to the shifting sands there are there, I think some of what may have given rise to this is further north the land becomes tundra (and permafrost area) and well used to be covered by glaciers. The glacial deposits ran further east as the land experiences greater chances in elevation. The Red River to the east, and near Winnipeg floods seasonally. 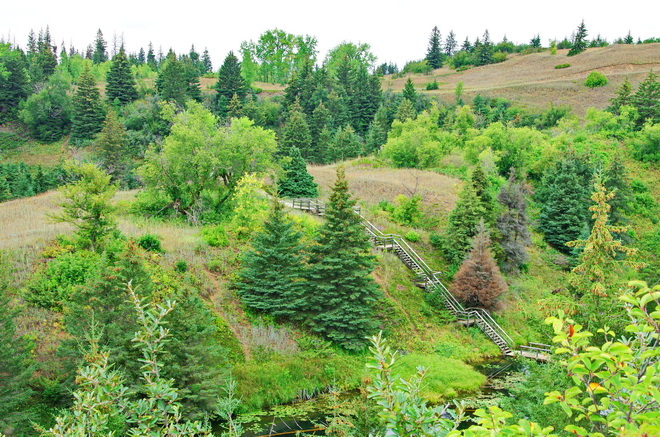 This picture is just before the rise to go into the larger desert.

How to reduce the distance:

Do you really need a hot desert? Cold deserts can have hot summers too with an average of 26° in Western China for their hottest month.

Not the answer you're looking for? Browse other questions tagged science-based environment geography climate .

4
A summer colder than winter?
4
World with only one habitable, off-center quadrasphere/quadrant
7
Constructing a desert area
6
Solar insolation/flux's effect on biome diversity/richness on an alien world
6
In what ways would the earth's orbit/atmosphere/ocean currents have to be different in order to create summer with long nights?
4
World with two directly opposed habitable continents, one hot one cold, with significant geographical barrier between them
6
Which Crops Could be Grown in a Subpolar Oceanic (CFC) Climate Zone?
5
Is The Climate Map for My Alternate Earth Accurate?