What are the climatological effects to the surface of a planet where the atmosphere gives way to vaccum? (diagram included)

(Please see diagrams) This is a question regarding an area of a Rocheworld scenario that I haven't found anything on.

It is suggested that the OUT side of a planet that is tidally locked with another is actually exposed to the vacuum of space because the gravity has pulled the atmosphere away from that area and towards the IN side which is facing the other planet with which its locked. But that must create a narrow area (a band around the planet?) which is neither fully covered in atmosphere nor fully exposed to vacuum.

On Earth the atmosphere thins out the higher we go. But on either of the Rocheworld planets the atmosphere would thin out right on the land the further you moved away from the twin planet. Potentially one could "walk" through a thinning atmosphere and right into the vacuum of space. That side of the planet, I imagine, would be like the surface of the moon (but with that planets gravity[?]).

But what would we experience in that band between the full atmosphere area and the vacuum exposed area?

See the diagram I drew below. (Hopefully all the other science is correct enough to understand the question.)

SECOND EDIT with diagram: Some of the responses suggest that my notions of the atmospheric conditions are off. I was wondering if you think this is more "correct"? If so, it removes the idea that the OUT side of the planets would be exposed to the vacuum of space. Hopefully this 2nd diagram is self explanatory. 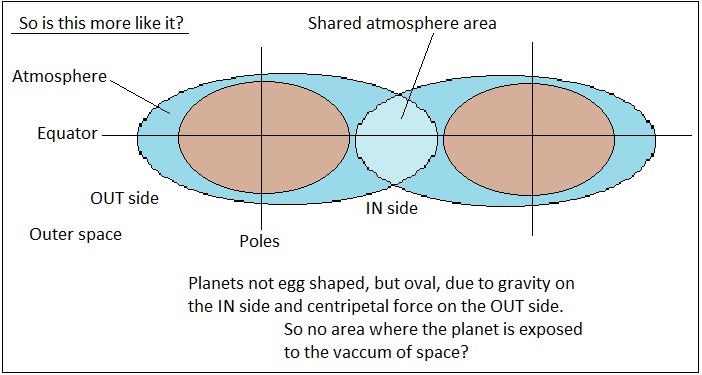 Although this does raise another concern... What is the shape of the shared atmosphere area, and does it leak out so badly that nothing could really cross between the two planets? Again, Thanks.

3rd edit: @neophlegm gives a great answer below that this third diagram illuminates. He has a great diagram of his own as well. 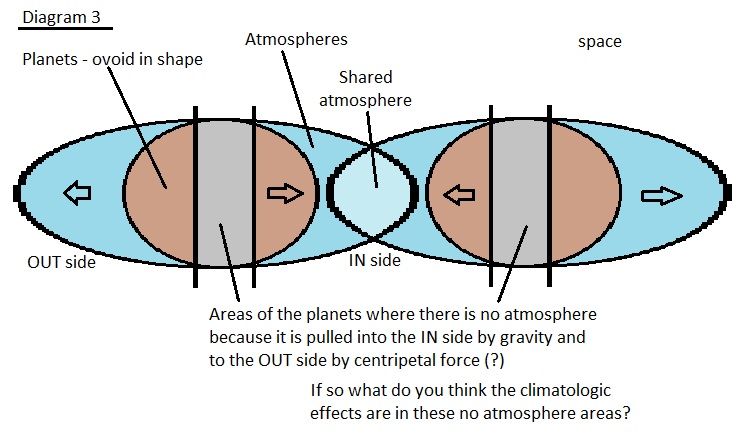 I'd like to respectfully offer an alternative to the above answers; while I agree this arrangement of atmospheres isn't possible even in this rocheworld setup, I believe the outcome would be different. Consider the effect the moon has on the tides on Earth:

In a rocheworld system as denoted above you would see a similar effect on the planet's atmospheres (indeed: the moon does exert effects on Earth's atmosphere, just far less notably). The outer edges of both planets retain atmosphere because of the inertial (or if you prefer, centripetal) "force" resulting from the system rotating. The inner surfaces of each planet retain atmosphere due to their mutual gravitational attractions. Also of note, the surface deformation would mirror this and you'd see a bulge pointing inwards and outwards on each body.

In the limit that these atmospheres touch in the centre the atmospheres would indeed have a central point where the net gravitational effect is zero: this is called a Lagrangian point (specifically it's the L1 point of a two-body massive system). However, this particular point is unstable: that is, if you perturb any atmosphere at the point it will move very slightly closer to one or other planet. This will increase the gravitational force on the molecules (since gravity gets stronger as you get closer to a mass), resulting in the atmosphere remaining bound to one or other body. The atmospheres could be exchanged in this way, but they wouldn't vent into space.

However, if the planets are sufficiently close and rotating sufficiently fast, there's the possibility that the atmosphere would coalesce at the inner and outer surfaces, and a band of near vacuum would form around the line circumnavigating the planet from pole-to-pole, in which transitional regions you would see effects as described in the answer from Josh above. You could even envisage two separate completely isolated ecosystems with their own plant/animal life evolving on the separate sides of one planet and never interacting until they develop the means to cross this airless barrier.

Disclaimer: I'm new on here so I hope this doesn't come across as impertinent. My sources are some judicious googling and a masters degree in Physics with a good number of astronomy modules.

This would be really weird climatologically.

I am assuming it is a similar composition to the atmosphere of Earth.

It should roughly follow a horizontal projection of our atmosphere's vertical distribution. 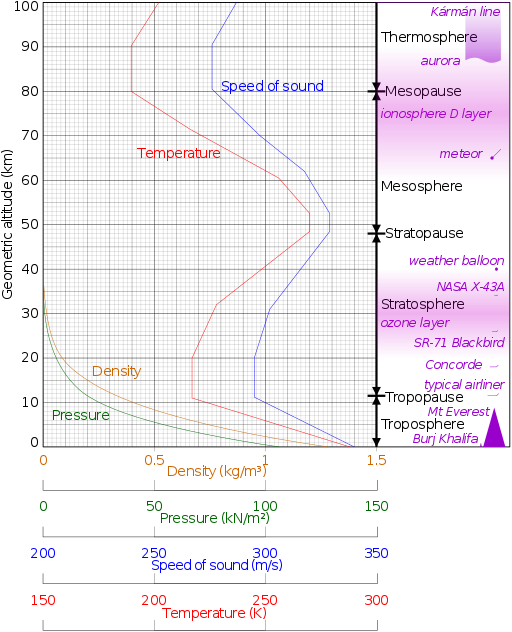 As you travel the air density and pressure would generally decrease. There would likely be sizable variations in this (Earth's atmosphere pressure changes due to weather systems; this would change similarly due to weather and local topography. A prevailing wind system,jet stream, or Hadley cell equivalent could make the habitable/breathable air boundary very lumpy and non uniform (and potentially changing).

The temperatures would be way different, on Earth the atmosphere get's heat from absorption from the sun directly and re-radiation of heat from the Earth.

Taking our atmosphere sideways you would expect it to initially get colder, but on this world that effect would be dampened by the stored heat in the ground or water (Ocean's would be crazy on these planets), so less of an initial temperature decrease. As you progress temperature extremes over night and day would increase similar to Earth's Moon which has temperature swings of hundreds of degrees.

At some point you would hit some weird places where the tropopause is in contact with the surface. Expect a constant fog or cloud layer to form at this level.

Ocean's wouldn't flow to here, if there is sufficient gravity to pull the atmosphere any ocean should be pulled similarly. Surface gravity in general would be strange on these planets with large sideways components, walking horizontally would literally feel like an incline. At some point water would boil due to pressure. You may have some odd icing and glacial buildup of frozen water and other gases (CO2 dry ice, etc.) specifically forming in polar? regions of less solar heating, or in craters or other places not exposed to sunlight. On Earth these ice particles fall and melt, on your worlds they would be at ground level and accumulate where temperatures permitted.

Speaking of craters, the landscape would change as you progressed with less erosion occurring and more un-eroded impact craters visible. Tectonically these planets would likely have any active plate tectonics generally moving towards the center of mass between the planets with large rift valleys on the far atmospheric side and potentially some active volcanism.

Higher you would get higher levels of cosmic radiation, surface level ozone formation or aurora, but these depend a lot on the planets magnetic properties which are a big unknown. I wouldn't expect such a non uniform planet under such large tidal stresses to have a rotating core (and corresponding magnetic field), but I haven't done any calculations to prove it's impossible.

Such atmosphere is, alas, physically impossible: the pressure is the same everywhere on the surface.

On Rocheworlds, as with any planet, gravity is always perpendicular to the local surface. After all, the planet is in hydrostatic equilibrium, so if the ground wasn't horizontal, it would crumble until it is. The strength of gravity may vary from place to place, but its apparent direction will never change - it is always vertical compared to the surface.

As such, if a high-pressure zone is next to a low-pressure zone, the atmosphere will simply flow from the high pressure to the low pressure, until equalised. The fact that some zones have a different gravity than others won't change that, though it will have important effects on climate.

But what if, at its lowest point, gravity is too weak to retain atmosphere?

Then the entire atmosphere will slowly evaporate. Depending on how old the planet is, it may have no atmosphere left, even if gravity at its strongest point would otherwise enough to retain it.

It would be somewhat thicker on the points more distant from the planetary centre, and the zone where the atmospheres meet would be slightly rounded (no bleeding-sharp concave angle), but given the relative thickness of atmosphere compared to the planet itself on an Earth-like rockball, it would not be very perceptible.

Also note that the planets would look more like an egg, with the pointy bit facing the other planet. An example can be found here. The author is a physicist (a laser specialist, but a physicist nonetheless) and as such, made sure to have a physically correct model.

Not the answer you're looking for? Browse other questions tagged planets climate gravity atmosphere vacuum .

56
Could two planets be tidally locked to each other so close they share their atmosphere?
7
How Would It Feel To Walk On A Rocheworld?

4
What would the air on a planet look like if it had a mostly methane atmosphere?
2
What would be the effects of an existing planet becoming tidally locked?
10
Giving a Planet Sunburn
10
Flight within the shared atmosphere of a Rocheworld, and between the planets, with low gravity wrinkle?
9
How would sunlight work in the area of shared atmosphere of a Rocheworld?
4
Planetary tidal locking causing asymetrical water distribution
23
Plausibility of helium dominated atmospheres on super-Earths
1
Could we move a gas giant by venting its gas?
5
How extreme can a habitable tidaly locked world be?
4
Tidally Locked Planet with no Oceans