What computational resources would work for a 550-year climate forecast of our earth?

I am writing a fictional future history to support a series of post-collapse science fiction stories set ca. 2560 Gregorian. The first story, The Borax Road Affair, has been accepted for publication in the forthcoming anthology After Oil 3: The Years of Rebirth from Founders House Publishing.

This world, which I'm calling the "Circumpolar", is a set of civilizations that have grown up around the "Polar Sea" (their name for the now ice-free Arctic Ocean, which has become the maritime crossroads of the world.) Now that I'm writing the history, mainly in order to provide migratory and linguistic backgrounds for the populations of the Circumpolar, I need to track some kind of believable climate development over the centuries.

What I'm looking for is a whole-earth, system-based climate modelling program. It needs to work with our planet, not with an invented planetary surface.

I'm having rotten luck finding useful resources - mostly it's just well-intentioned (but useless to me) sites that will allow me to Calculate My Carbon Footprint. My carbon footprint is irrelevant to this project. I need the planetary picture for centuries out.

Another very real problem: the underlying climate models on the few climate modelers/calculators that I've been able to find do not allow midstream parametric insertions that can modify the run.

What I need, particularly

I'd prefer an online modeler if possible. If I need to run it offline, preferably something written in Python or Java.

I do not need predictive confidence and power. I just need scientific plausibility.

Specifically, I need to be able to provide:

I realize it's not too realistic, but I'd ideally also like a model which can handle such difficult topics as:

I am working within very explicit constraints here, and I would deeply appreciate it if answers and comments respect those constraints.

Constraint #1: Certain ships have already sailed/Toothpaste can't go back into the tube/I'm already on record.

Because the first story is in the publication process, I can't walk back any of the assumptions I made when writing that story. In particular:

The After Oil series editor, John Michael Greer, proprietor of The Archdruid Report, put out his call for submissions in contest form. Here's the official statement of the contest rules:

The requirements are the same as before:

That is to say, the stories that will find a place in the second anthology, like those that populated the first, will feature human beings like you and me, coping with the aftermath of the industrial age in a world that could reasonably be our future, and living lives that are challenging, interesting, and maybe even appealing in that setting. I’d like to make an additional suggestion this time around: don’t settle for your ordinary, common or garden variety postpetroleum future. Make it plausible, make it logical, but make it different.

So, there you have it. I stated my constraints at length; thank you for reading them; please treat them as they are. I'm working within them, not building a world from scratch. :-)

There are only two models that I'm aware of that could scale out to the timeline you've listed...

and the other is CM2.x done through NOMADS (NOAA National Operational Model Archive & Distribution System) ... http://nomads.ncdc.noaa.gov/thredds/catalog/gfdlcm2x/catalog.html is their older site, I haven't updated my links recently.

Most of the other models I'm aware of won't even try to do anything more than 1 month out.

Both of these don't really progress past 2100 as we really don't have much for information on the topic...Our ever changing date of the ice free polar region is a good example of that. One element that we are truely in the dark on is the sun (pun intended) and it's various phases are heavily unknown. Sunspotting appears heavily on the decline and if that pattern continues, we may see a minimum sun cycle that could see the globe cool a bit once again. Unfortunately there is so much variation (including human behavior) that needs to be included that you probably could create a climate simulation, run it 5000 times, and not have one of those simulations end up with the same result.

The processing power required to run these models is pretty intensive...that and the best forecast model we've found is to run the model thousands of times and work with the averages of the many runs.

Honestly, at that date range...you can be pretty creative. If you want a model for it, you are simply depending on someone else to be that creative for you and program it in modelling form.

Complete side note... Banff is a considerable distance from Edmonton...Go with 'Jasper' about 3 hours drive north of Banff if you want mountain living near Edmonton.

Since the climate is a vast, chaotic system where outputs are not linearly related to inputs either spatially or temporally, what you are asking for is essentially impossible. Just looking at how difficult it is to get an accurate 7 day forecast from the Weather Network or any other weather prediction service should give you some idea of what you are dealing with.

Since you are writing a story (or series of stories), you can plug in some events which have historically changed the climate wherever it will fit. Supervolcano explosions like Tambora are known to have cooling effects on the climate (the 1815 "year without sumer" is a clear example). Changes in the output of the sun have a definite effect; the Little Ice Age seems clearly linked to the Maunder minimum. What warms the planet seems a little less clear; the good weather that the Roman Empire seems to have enjoyed or the European Warm Period are obviously not a result of any technological activity by human beings, but the ability to do croft farming in Greenland in the 1100's or grow grapes in Scotland and make wine in the 1300's are pretty clear evidence that things really were different then.

And of course since your story is set 500 years in the future, there is no reason that human beings of that time could not simply adjust the climate to their own liking, either through releasing gasses into the atmosphere in controlled amounts, or using technological and biological manipulation to subtract gasses. Orbiting platoons of solar mirrors to illuminate or shade parts of the Earth would also have global effects. You can imagine other technological "fixes" that human beings 500 years from now might be doing.

If you are aware that solid prediction is not possible, and you find predestination distasteful, you can put biases into whichever direction you want to push the balance.

Do you want dystopia? Unleash the methane.

Want Earth all cleaned back? Let humans invent/design efficient bacteria which converts CO$_2$ from atmosphere back to oil, and pump it back to underground.

Both outcomes are plausible. BTW such bacteria was already found, it is just hard to grow on industrial scale (and Yale bio-magicians are working on it).

I don't know much about weather, but I do know Universe Sandbox$^2$ offers a basic climate simulation where you can get the world to snowball from changes in CO2, throw big rocks at it, move it closer to the sun etc. This might not be scientifically accurate, but it would give you very satisfying pictures to look at. 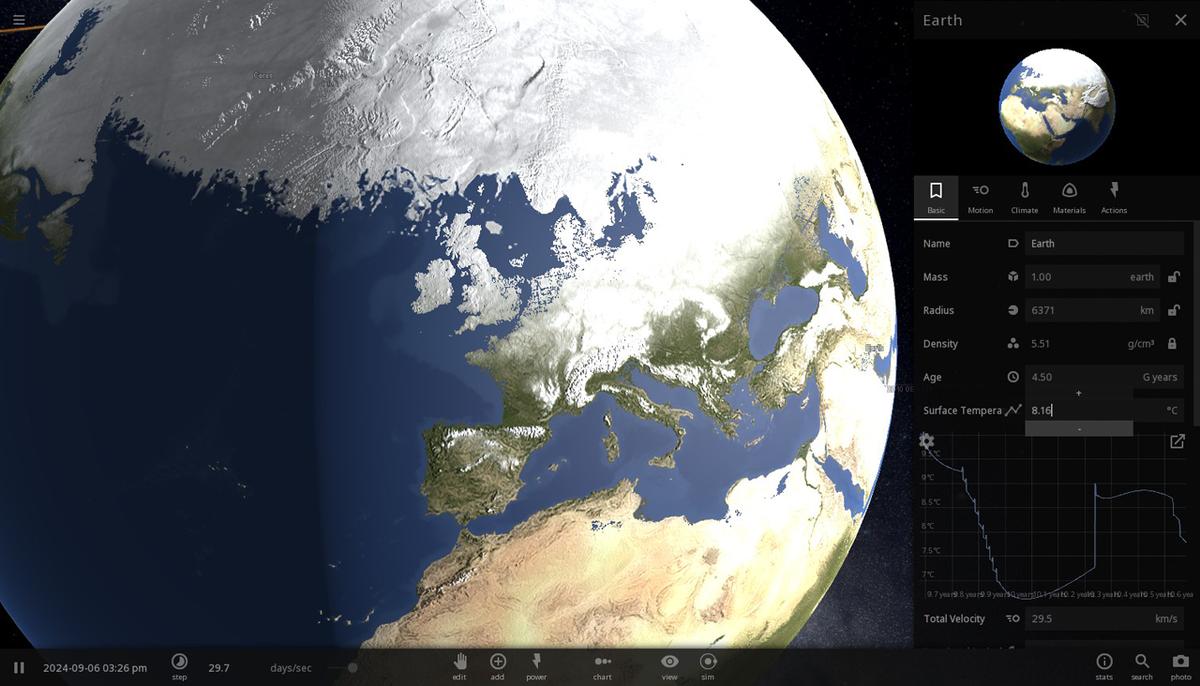 I would love to put something brilliant, witty, helpful and profound here, as this question deserves it.

Sadly I don't have these at hand. I can tell you that there is software (opensource) called "Earth System Modeling Framework". It is not an off-the-shelf ready solution, and is known to require substantial computing resources but might help point you in the right direction.

To your research thus far, have you considered that non-linear events would be a near certainty? Methane Clathrate releases, depopulations' effect on reforestation, ocean levels and salinity, changing ocean currents' effect on coastal temperatures, etc.

I look forward to your publications, one of the many things that set apart authors like Michael Crichton was the research behind the pages of words. Yours is a similar course, I wish you success !!

I know a lot about coarse paleoclimate models. I can help a little bit here.

In brief, I can guarantee you that no desktop model exists to do what you want; this is firmly supercomputer territory. At best you'll need to sneak a peak at other people's simulations. Even this will be hard, hopefully you can find reports from a CMIP5 model that break out the decade by decade temperature and precipitation map. WRI's Cait tool or the https://climexp.knmi.nl/start.cgi might be of help here. The Potsdam climate inst. might also have nice pictures.

Overall, you can sketch out the plausible from a suite of simulation results and write a story around that.

The biggest stories to play out here will be human and political -- when does a particular region break down in response to a few years of less-than-sustenance harvests? How does that snowball geopolitically? -- that are more in the control of the author than they are slaves to a computer prediction.

I suggest that the movement of the ITCZ and the consequent precipitation, alongside a general warming that enhances storm events and lethal heatwaves will be the main global stressors. Flashpoints could be a drying of Africa (precip limited crops), flooding of bangladesh as sea levels rise, a food crisis in Indonesia if the wet season no longer allows three rice harvests, or Pakistan/India given the Bangladesh migration plus their own monsoon concerns.

EDIT: I did just look at edGCM, which purports to do something close to what you desire. Great, well done those guys and I recommend taking a look. Word of warning: They must use a lot of parameterisations to simplify their model, which will almost certainly mean that they have linear extrapolations around current behaviour instead of working out all the physics from the ground up. This will be good enough to point you in the right direction, but I suspect that it does not treat oceans properly, nor have a real precipitation scheme that will demonstrate effects like the moving ITCZ. Which means it will be kind of correct, but rapidly lose accuracy if pushed into extreme behaviour like a fully-liquid arctic (because that would fundamentally alter ocean dynamics, and nothing short of a supercomputer will be able to solve for new dynamics and predict all of the knock-on climate effects).

We currently can't even predict 550 hours in the future with take-it-to-the-bank certainty.

Make the global climate whatever it needs to be for the purposes of your narrative. Do keep it plausible, as the marching orders dictate, which means that:

Not the answer you're looking for? Browse other questions tagged science-based climate earth population worldbuilding-resources or ask your own question.

57
What software is available for keeping and organising notes about your world?
11
Resources for Climate World building
3
What would the climate on a planet with 85% or more of the surface area covered in water be like?
8
How much medical information could we gather from a wrist-worn device?
5
How do I tune the incidence of gene expression in my fictitious population?
11
Terra Australis: How can I minimize the effects of its existence on the climate in the rest of the world?
5
If Theia had settled into a slower, near orbit to Earth, how would that effect climate activity?
9
What are minimal changes to make truncated pyramid-shaped megabuildings a thing?