Where to Keep Your Dinosaur?

Let's say I'm a secretive organization who's recently come into possession of two individuals of the genus, Giraffatitan (a sauropod similar to the more famous Brachiosaurus for those unfamiliar with it). Most other creatures that this organization comes into possession of aren't theoretically hard to find space for, but a 70 foot long, 40 ton animal is another matter from anything they've had to manage thus far.

This poses a problem, as, to remain in a generally healthy state, these massive animals need a lot of room to search for half a ton of vegetation per day. Keeping the animals indoors is theoretically possible, but pretty much impractical when compared to allowing them to be "free range", so to speak. The issue here, if this secretive organization wants most of its actions to remain hidden is that there aren't a lot of places that both provide a lot of space and are away from the public eye that are simultaneously on land and generally suitable to being Giraffatitan living space.

My question is this: Where on Earth could you let these two animals roam and feed themselves, tracking and managing their movements, without the public getting too suspicious? I've thought about somewhere in Central Africa or perhaps the fringes of the Amazon rainforest, but I'd like to hear other ideas on the matter. Here's an organized little list of the general requirements of the location.

Find a convenient Tepui. There are many of them, some of them quite large, more than enough to provide for your dinosaurs for a long time - you can move them between tepuis to prevent damages to the vegetation to be noticeable from the air, although as ACAC has pointed out, moving these large beasts unnoticed is not going to be easy.

They are in the middle of the jungle, and most of them are inaccesible from below, so there's nobody there, nearly nobody around and nobody can get in nor the dinosaurs can get out. There aren't cameras, drones or aircraft that you have to worry about - the only planes that fly over them fly too high to notice anything.

I kinda hate to say it in some was, but it might be impossible, in this day and age. Consider the following:

Firstly, we must understand what Giraffatitan needs in its environment to be healthy and stable. Looking up on Wikipedia gives us:

So this translates to a near-coastal swamp, perhaps partially brackish with mangrove-analogues, and dense forest cover. That being said, I can’t think of any natural location which could 100% match this setup, as well as give enough room for our sauropods to live. Odds are, you’d have to terraform/later the landscape to suit them, which would be very noticed.

The closest natural matches are the mouths of the Congo and Amazon Rivers, but the problem is both of those locations are still travelled enough by humans that people would notice a couple sauropods in the area.
This leads us to problem number two: Google Maps. Satellites will notice these areas, and will also likely spot any dinosaurs living in there. Frankly, unless you’re willing to spend money to make an underground swamp habitat, you’re not hiding these sauropods. Humans have eyes everywhere.

Now, if you wanted to hide something smaller, say, a Hypsilophodon? That might work... 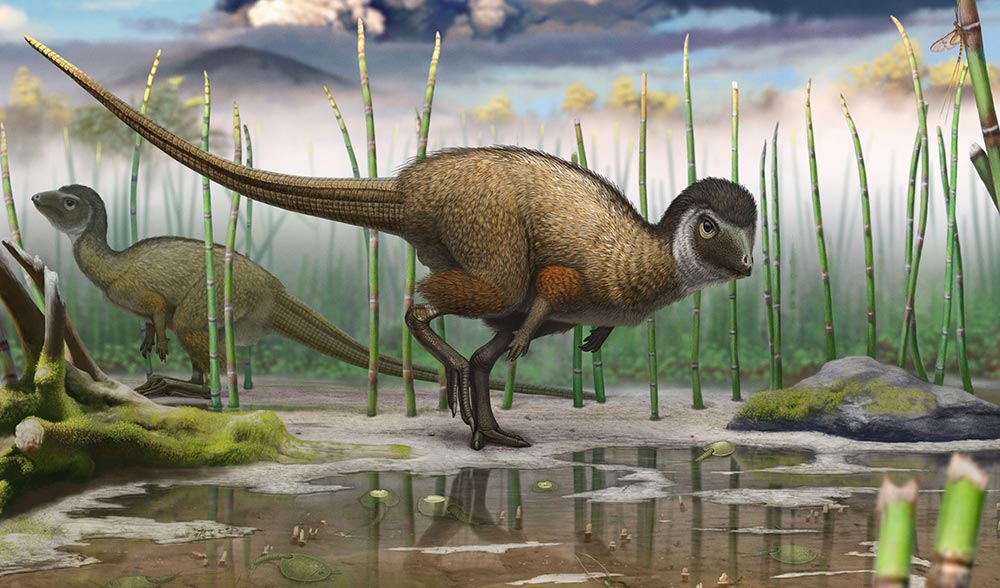 Here's a possible inspiration for a possible solution: Musha Cay and the Islands of Copperfield Bay. This is a set of 11 islands privately owned by David Copperfield, that house a resort. together they are about 700 acres of land. And I think that a similar place would be perfect for your needs (and there actually are lots of places on earth that can house similar conditions). Let's take a look at a set islands like that one, and see how feasible they are as a solution:

Can the creatures even live there?

Given the details in your question, yes. You probably want to make sure plenty of vegetation is planted constantly to account for what they eat, but there's plenty of space. also, if you pick a group of islands close to Musha Cay, the island will probably have lots of natural vegetation.
Bottom line - Monitoring the health of the island and your dinos is a good idea, but the islands can house the dinos.

Can you keep that secret?

Note: I'm assuming your group has the means for all this (it's a secret dino-collecting group after all...).

So this is what I think is the really interesting part. There are a lot of places with forests out there, but the resort island model has an advantage of helping you with secrecy.
What your organization can do, is acquire a set of islands similar to Musha Cay (because we want it to have vegetation and to be attractive). Then build a high class resort on it.
Next step - get some celebrities to vacation on your island. What you then do, is claim that they have been filmed during their stay. Using that as an excuse, you ask the country that sold you the island to outlaw drones in the area, and in similar fashion you ask Google (and other companies that take sat-images) not to take pics there.
The people you interact with think you're just trying to please some diva celebrity, and not that you're hiding a dinosaur, so they aren't likely to look to much into it.
What you achieved is a state where you have an inconspicuous reason to ask for privacy in your islands, which is great.

But will this actually work? Is it enough?

Well, if you manage to convince the local gov. to close ban aircrafts near you island, you are now the only one that can take a (high-res, non satellite) picture of the entire place. Take a few before moving in the dinos, and post them publicly. Spread them on a website where you claim to book the resort, and set up a phony business around them. In real life, not many questions are asked about Copperfield's islands, and most attention it get's is because of the owner. This means an island resort owned by "Pacific Resort Inc." is likely to not generate to much unwanted interest. Even if it does, you control all public photos of it, and none will show evidence of your dinos' existence.
As a bonus, you can have a remote section of them actually rented now-and-then. a nice stream of money to lower costs, and more importantly - a better cover.

A(n unfortunate) piece of reality - It is going to be hard (and nearly impossible) to actually stop all sat-images of the island. In the context of a fictional world, I'd say best option is for the group to have agents in companies and governments that have satellites, and have them blur the island or corrupt the photos in a different way.

Assuming they don't mind bumping into a few trees (and crushing some), a good bet to finding sauropods would be the temperate rain forests of Washington state.

The reasons being that there are a lot of sparse regions of vegitation intertwined with the heavy vegitation. Up here, the girafatitan would have plenty to eat a the forests here cover hundreds of miles of deciduous and coniferous trees alike. The last reason is most of these regions are not visible to public eyes, meaning they are not likely to be found.

If they do mind bumping into trees, then I'd say the prairie in much of the center of the U.S. - there is an absolute ton of tall grass for them to munch on, with extremely wide, open, and flat space. It also is mostly out of view of humans.

Aerium Hanger, also knows as Tropical Islands Resort is an enormous ex-airship hanger turned holiday park, with an internal volume of 5.5 million m³. It is not unreasonable to build something like this in a classic Area 51 location, terraform the inside to match your Giraffatitans' needs and put them inside. You will have to ship in a literal ton of food each day, but it avoids the risk caused by aircraft and satellite photography.

Of course, people will wonder what's inside the huge building, but you just need to circulate rumours about it being a UFO storage facility and you'll be fine.

Not the answer you're looking for? Browse other questions tagged geography dinosaurs or ask your own question.

4
How much land to keep a sauropod in captivity?

3
Where can average Joe secretly hide his hybridized Mosasaurus in the present day?
9
Best dinosaur species to have as a pet?
4
The Next Dinosaur Titans
7
What would have to happen in order to have both humans and dinosaur-like creatures on the same planet?
8
Could a Dinosaur make tools with only three fingers?
4
Which dinosaur would have the highest chance of survival in modern times?
4
Would separate species of sentient dinosaur cooperate?
8
How CAN a Wyvern be a Scansoriopterygid Dinosaur?