I'm working on a sci-fi book, and a chapter I'm currently on is about a guerilla attack on a human city on the planet.

The outer atmosphere is mostly CO$_2$ and methane. The aliens breathe methane (naturally) and fart O$_2$. Air density is the same as Earth, as is the gravity.

Now the humans live in geodesic domed cities. Each dome is about 20-40 km in diameter and the domes are connected using tunnel systems. The air inside the domes is Earth standard with mostly Nitrogen and O$_2$. The domes are reinforced against harsh weather and have robots doing maintenance work on them.

My questions are, how devastating would an incendiary mortar or missile attack be?

You could set the dome up such that it had automatic fire suppression.

If atmosphere inside the dome was slightly below exterior atmosphere the outside would help hold the dome down onto the ground.

If there is a hole in the dome the outside atmosphere will come in. There is no oxygen in this atmosphere and it will not itself support combustion.

A fire inside the dome will burn as long as there is something to burn and oxygen to burn it with. The oxygen itself will not burn. The fire will burn trees, houses etc like fires do.

When the methane comes in and hits the fire and oxygen it will burn. It will compete for any available oxygen with the burning trees and houses. It will not explode. It will burn slowly, like the Hindenburg.

The faster the outside comes in the faster this will happen. You could have the dome open up to facilitate that. It is like those fire suppression systems that dilute the air with nonoxygen containing gas.

When oxygen inside the dome is consumed down past a point the fires will go out. Dilution of oxygen nitrogen atmopshere by outside atmosphere will hasten this.

Of course for a dome breach there would be sirens etc. Every human habitation would have oxygen cylinders and masks. People would put them on and head for the tunnels.

Later you could fix the dome and pump the correct atmosphere back in. Your buildings etc should still be in decent shape.

I am getting those pesky downvotes for lack of hard science. Rather than delete this answer in a fit of pique I will lay out what I think is needed to answer with hard science.

Here is what is needed for the hard science: the exact composition of the atmosphere. If 85% methane and 15% CO2 this will pose more explosive risk than vice versa. One could use data from mine operations to figure explosion risk.

Can city engineers shunt the inner atmosphere out in time to prevent a catastrophic collapse of the dome?

Can the people stop the fire from spreading and reseal the damaged portion of the dome or will the inferno happen so fast there won't be any time for it?

Incendiary bombs like those dropped on Tokyo in WW2 make fires that are hard to control, whether in a dome or in Tokyo. The two variables in the dome not present in Tokyo:

Firedamp is explosive at concentrations between 4% and 16%, with most explosions occurring at around 10%. It caused much loss of life in coal mines before the invention of the Geordie lamp and Davy lamp.

I am not able to guess what % methane is in the atmosphere. The atmosphere of Titan has 1.4% methane which would not be explosive mixed with earth type atmosphere. It looks like on this planet, based on the metabolism of the aliens as far as I can understand, methane is in a role similar to that of CO2 on earth. CO2 is less than 1% of earth's atmosphere; again non explosive.

I am going to therefore guess that the % methane in this scenario is less than 4% and so there is no risk of explosion due to methane coming in and hitting the fire. The mostly CO2 atmosphere coming is will act like a CO2 fire suppression system which are commercially available and work great.

•Would the whole city in that particular dome actually im/explode? If the answer is yes, how long till it happens from the initial attack?

This has a lot to do with the nature of the initial attack. If the initial attack is a colossal bomb it will produce a big explosion as they are wont to do. If my guess above was wrong and there is a high % methane outside and a fair bit can mix with the interior O2 containing atmosphere and be ignited, that will cause an explosion of an energy dependent on the amount of methane mixed with the O2. Any other attack will not make an explosion.

•How much time do the citizens have in order to seal off their houses/buildings or get into underground shelters?

Houses can automatically seal if there is a dome breach or pressure change or fire. The time the citizen have depend on how fast the atmosphere in the dome will turn into 1: the outside atmosphere or 2: an oxygen poor / carbon monoxide rich atmosphere because of the fire. That depends on the nature of the fire (incendiary bombs can kill by depleting regional O2) and damage to the dome / intentional venting of atmosphere.

Since this is fiction you can adjust scenario to be what serves the story - people trapped outside banging on the door as the houses seal up and the dome vents. Or people strapping on their O2 masks and coolly watching the fires go out as the atmosphere vents.

The biggest problem is definitely the methane. Methane is only a little lighter than earth's air. This gives you slightly more time to prevent a catastrophic reaction, as it would take a little longer before the methane enters the hole in the dome. That's where the good news stops.

Gasses mix very quickly thanks to entropy, and in this wherever the air and methane mix there will be an explosion. 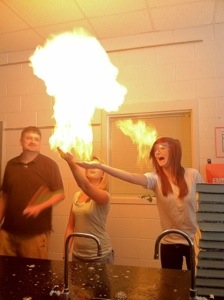 The methane mixing into the air will instantly combust and will do so with force. This initial explosion would expand the damage of the original attack. More methane continues to flow into the habitat and the fire continues to rage on, melting the dome(methane fires run around 3542 Fahrenheit) and continuing to expand the size of the hole. The size of the fire would begin to suck air towards it faster and faster, probably turning into fire tornadoes. If left unchecked, the fire will continue to burn until the last particles of oxygen combust.

The heat from the fire may not pose a problem to the inhabitants, as it will be burning kilometers above them. Due to the size of the dome, they would have some time to don pressure suits or move to another dome. If the dome was on the smaller side of your radii, it would have a whopping 30 thousand cubic kilometers of air. If the hole was 5 meters in diameter(and stayed that way), it would take a long time before there is a serious problem. As long as the structure of the dome doesn't melt and break, it could continue to stand for a long time.

Assuming the fire generates 100mph winds(the same speed as some California wildfires), up to 3,555 cubic meters of air would be consumed by the fire per second. That would mean...drumroll please... the inhabitants would have 267 Years to evacuate. In short, the size of the dome saves you. As long as your robots had some heat shielding and they could spray foam or cover the hole, they would have plenty of time to do so before the residents below notice more than an orange dot above their heads.

A final note: The higher the melting point of the dome, the less you have to worry about the hole spreading. if these are advanced humans, their dome could be made of a material like graphene, which has a theoretical melting point of 3697 °C.

Not the answer you're looking for? Browse other questions tagged science-based hard-science or ask your own question.

20
How do I figure out how many people my domed city on a hostile planet can support?
4
Targeting cities with meteors (part 2)
4
What would the air on a planet look like if it had a mostly methane atmosphere?
7
Weather Effects in CO2 + Methane Atmosphere Planet?
11
How do I increase air pressure for the planet Mars?
0
“Rich mix” methane/oxygen atmosphere on a planet — how would life develop?
6
How could flightless dragons survive in a world with advanced firearms?
3
Carbon cycle on planet with mainly CO2 atmosphere
3
Artificial oxygen oasis in an otherwise CO2 atmosphere
2
Planet with stained atmosphere