In my story, a colony ship has made landfall on a planet. At first there is not thought to be any sentient life there, but after a while it becomes apparent that this is not the case.

The idea I have for the alien life form is that it can reproduce in a number of different ways - asexually, sexually, and by a process of transmittance. After a while the colonisers notice that a lot of the native plant and animal life shares specific alleles. This is from the sentient alien. It works by hybridising with other species, and this aids its own species survival by making once hostile organisms placid. (Like Toxoplasmosis in cats).

It's pivotal to the story that the aliens can breed with the humans, though this doesn't necessarily have to happen by a process of sexual intercourse. The parasitic DNA affects its host with new ways to communicate, a deeper sensitivity to other life. When mixed with humans, and everything that comes with it - anxieties, ambitions, politics - it provides them with communication capabilities that can’t be tolerated in a society that is just starting, and wants to retain what makes it human.

The aliens are driven back, as their main protection was the ability to conscript other species to its side, and aside from that they are essentially defenceless. All biology with a trace of this DNA is destroyed, until the land around is sparse.

But I need some actual biological explanation for it happening. This doesn't necessarily need to be hard science - after all, what I'm describing doesn't happen in the real world (I don't think). But I need there to be a sufficient amount of scientific explanation for the on board geneticist to hazard a guess as to how this has happened. In a later installment of the story, 200 years after the initial colonisation, I'd like to delve into the explanation a lot more. 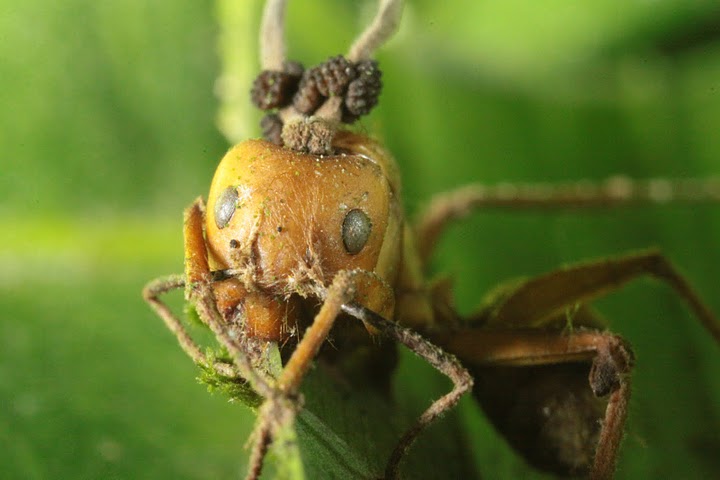 There exist pathogenic fungi which infect insects and control their behavior. The most obvious thing is that they make the insects climb high and leave their bodies as spore fruits, to disperse in the wind or be eaten by birds. Toxoplasma as cited in the OP does something similar; rats lose their fear of predators which helps toxo because being eaten by a cat is a stage in its life cycle.

An excellent fictional organism of this sort appears in Brian Aldiss' Hothouse aka The Long Afternoon of Earth.

“You are a human,“ said a voice. It was the ghost of a voice, an unspoken voice, a voice that had no business with vocal chords. Like a dusty harp, it seemed to twang in some lost attic of his head.

In his present state, Gren felt no surprise. His back was against stone; the shade about him covered not only him; his body was of common material; why should there not be silent voices to match his thoughts?

“Who is that speaking?” he asked idly.

”You call me Morel. I shall not leave you. I can help you.”

He had a detached suspicion that Morel had never used words before, so >slowly did they come.”I need help,” he said. “I am an outcast.”

“ So I see. I have attached myself to you to help you. I shall always be with you.”

Gren felt very dull, but he managed to ask, “How will you help me?”

"As I have helped other beings," said Morel. "Once I am with them I never leave them. Many beings have no brains; I am brain. I collect thoughts. I and those of my kind act as brains, so that the creatures we attach ourselves to our more cunning and able than the others.”

“Will I be more cunning than other humans?” Grin asked. The sunlight at the top of the warder course never change. Everything was mixed in his mind. It was as though he spoke with the gods.

”We have never caught a human before” said the voice, choosing its words more rapidly now. We morels live only in the margins of Nomansland. You live only in the Forest. You are a good find. I will make you powerful. You shall go everywhere, taking me with you.”

The morel knows not only what its own ancestors knew, but it also learns much of its human host Gren's ancestral memory.

But this is only background; the heart of what makes this a literary novel is "the morel". The morel is a parasitic fungus that acts like an auxiliary brain of sorts; when it attaches itself to a human, it can not only render them more intelligent and inform them of the contents of its own memories, it can dig through and interpret their ancestral memories as well... The protagonist, Gren, isn't just informed and made more intelligent by the morel -- as well as being controlled by it in ultimately destructive ways -- he's also brought by it into modernity. He is changed from a person reacting within a tradition of inherited social structure to someone with a familiar, contemporary mindset that the world is shapable, controllable through thought and effort.

In the book the morel is contagious like any contagious fungus (and I am somewhat creeped out to see how brain like the ant fungus looks...). It is interested in the success of morel-kind but also its own particular success. That would work for your story.

Or you could have the DNA of your aliens ride along in the cells of various hosts as episomes; viruses and other parasitic DNA do this. Or have them be tiny organisms like Wolbachia, which was my answer to this similar WB stack question about interspecies reproduction.
Plausibility of this Zoonotic(inter-species) Reproduction Method

The aliens and the humans share a common ancestor. These ancestors were a space faring race, which left some "specimen" on the planets they visited for the sake of colonizing those planets with low cost mission (plant the seed of intelligent life and let nature do the rest).

Through evolution most of the commonalities in DNA have been kept, and therefore interbreeding is still possible.

It's plausible that such a creature might exist, and we could put together a broad picture of how it works based on other pieces of our current knowledge.

Firstly, we might see a viral strand that resembles a CRISPR protein, a kind of cell defence mechanism used by certain bacteria. We use CRISPR proteins in genetic engineering to 'cut out' a targeted sequence of genes and insert a new one. Such a thing could work on humans- but it would have to be tailored to humans.

Then we might discover a kind of bacteria native to the colony that also produces CRISPR proteins, but in an unusual way. This bacterium would infect other creatures and by fault or design its natural CRISPR defences would work as a small genetic lab - it would ingest its host's DNA and instead of modifying itself, it would create a CRISPR protein that targets a bit of the host and inserts a chunk of itself: the alleles we observe as a result of infection.

Of course, the disease would eventually be fought off by the host, which leaves us two options, both plausible:

A) The disease also transforms the host into a carrier for it. This might be the goal of the genetic modification: to make the host enough like the bacteria that it avoids being destroyed by the immune system. As a side effect the carrier will infect everyone they come across.

B) The disease attacks the reproductive system first. This one is very insidious, and targets one of the biggest risks of embryo modification in the real world: even if the host fights off the infection, all their children will already be affected.

For best results the alien uses a combination of both. It's questionable whether arbitrary alleles could be generalised to all species and I'm no biologist, but it's plausible enough that a gene package with enough changes could bring the necessary framework with it as well.

6
Plausibility of this Zoonotic(inter-species) Reproduction Method

5
How can I tell if stone age aliens are sapient?
4
My generation ship aliens: Nocturnal and Diurnal plausible in same species?
16
Can a reproductive system that allows interspecies breeding be made believable?
3
If life evolved on a planet with two suns, one emitting in the ultraviolet and one in the infrared, what light would that life evolve to see?
25
Could a species with a lifespan of 20 years achieve enough technological progress to reach space?
3
How might natural teardrop shaped markings on my humanoid aliens be connected to their empathic abilities?
4
Feasibility of nurgle inspired species
12
Why haven’t scientists found evidence of humans interbreeding with aliens?