A Box That Scrambles Particles

I have a box. It's slightly larger than a coffin. The interesting property of the box is that when I close the lid, all the of the matter inside is broken up into its subatomic particles and the particles are scrambled. If I put someone in the box and closed the lid, what could I expect to find when I open the lid? I would personally expect hot hydrogen but I have no idea.

If this is not possible, please give the most scientifically plausible answer. Also, I'm not knowledgeable in such things, so if there are any details I left out, feel free to interpret it any way.

In order of plausibility:

Your box could be an incinerator (scrambles at molecular level)

You put things in (eg paper) and out it comes in the form of steam, carbon dioxide, carbon (solid), and various trace elements fused into a weak solid called ash. In essence, it generically melts, disassociates and combusts everything it can. This won't change anything at the subatomic level, but it may fit your requirements without requiring hand-wavium.

As for what you could find when you put a person in? Well, um, do some research on cremation. Wikipedia lists things like calcium phosphates, various salts, as well as the gaseous forms of sulphur and carbon compounds.

How to make this incinerator more awesome

Or your box is a fission/fusion power plant

You have need some form of nuclear reactor to rearrange things at the sub-atomic level. (Because it's re-arranging the nucleii of the atoms to turn them into something else). In this case, anything put into your box comes out "more like iron." Why is this?
Turning hydrogen into helium releases energy. Turning boron into carbon releases energy. Light elements undergo nuclear fusion to become heavier elements. But on the other side, turning uranium into protactinium release energy because turning heavy elements into lighter ones releases energy in the process known as nuclear fission. At some point these cross over, which can be read off the following graph: 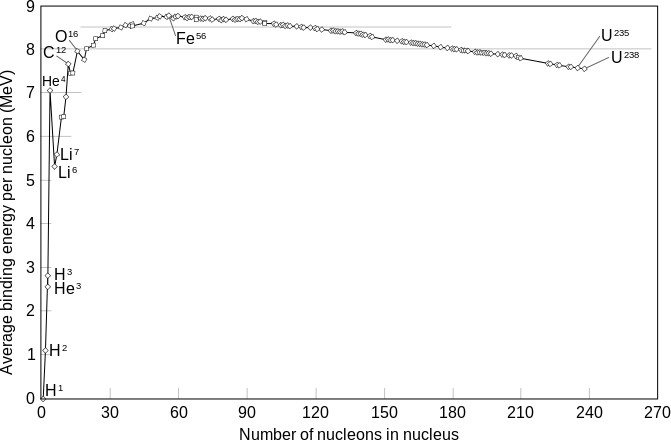 Hence, assuming the creators of the box didn't want it to consume copious amounts of energy required to turn atoms into hydrogen, then your box will turn everything into iron. In doing so it will release enormous amounts of energy.
If the creators of your box are slightly less advanced, it may stop at some of the "lumps" in the graph, producing helium, carbon and oxygen as well.

So, if the box has unknown origins I would guess it is some far-future power plant that generates heat (that can then be used to create electricity) from any matter placed inside it. This device is far in advance of anything we can build.

The third option does almost exactly as you said in your question: it turns things into hydrogen. What does it do? It splits up all the atoms into electron-proton-neutron triplets called hydrogen. In doings so it consumes enormous amounts of power.

Did I mention that this box will consume enormous amounts of power? Because it is doing the opposite of our former-energy-producing-reactor, this is an energy-consuming-reactor. To power this device you will need something more powerful than our fission/fusion power plant from the previous suggestion. So unless someone has a power source us humans can't even comprehend (or a bizarre need for hydrogen and can't scoop it from stars or electrolyze it from water), then this machine is the ultimate power-wasting device.

This also accomplishes your goal of hydrogen, and may consume less power than doing it through nuclear reactions. This device creates a localized distortion in space that vastly weakens the nuclear binding caused by strong-force. Inside this field, all matter flies apart into it's constituent protons, neutrons and electrons because the atom's nucleii can no longer hold together, so electromagnetic repulsion throws the nucleus apart. Chances are the protons and electrons will start orbiting each other, and after a while the neutrons will join back in and you'll end up with ... hydrogen. Just as you wanted.

What is this machine? Why does it exist? I have no idea.

23
Scientifically Plausible Reincarnation?
19
Dumbbell planet - how would humans cross the bridge?
8
What are alternative particles to photons that would allow vision?
2
Localized manipulation of the speed of light
7
Realistic hovering mechanism for my sci-fi drone
3
Will my planet work? (size, gravity, atmosphere)
3
Is there a way to trap a super-being like Dr Manhattan?