If rain magically started falling over the Sahara, what would happen?

You may assume the rainfall will match that of a Tropical Rainforest at their wettest (304 in. annually).

How would this change the landscape over time? (0-100 years)

100 years wouldn't be enough to turn the Sahara into a savanah, but it would be a good start. From this source we read the following (emphasis mine):

But around 10,500 years ago, a sudden burst of monsoon rains over the vast [Sahara] desert transformed the region into habitable land.

This opened the door for humans to move into the area, as evidenced by the researcher's 500 new radiocarbon dates of human and animal remains from more than 150 excavation sites.

"The climate change at [10,500 years ago] which turned most of the [3.8 million square mile] large Sahara into a savannah-type environment happened within a few hundred years only, certainly within less than 500 years," said study team member Stefan Kroepelin of the University of Cologne in Germany.

So, 200-500 years of monsoon rains would get you a savanah. 100 years might only get you grass and scrub brush.

Please note that for a long time the desert would simply drink the water. Sand doesn't hold water well, and the underlying aquifer would need to recharge. After that the water table would be high enough to sustain regular rivers, ponds, and lakes. That's when the real growth would begin. But even then, sand sinks. It would take a long time for grass to take root, holding down the sand and creating a bed of organic mass that eventually turns the top layer of sand into soil. This process is fast by geological standards, and painstakingly slow by human standards.

Therefore, after 100 years the Sahara would be spotted with ponds and lakes connected by streams and rivers with grass and low bushes growing along the banks. Maybe even some trees. But between all that would be desert. Not as barren as the original, but desert, nonetheless.

Flooding would be a regular problem as it would wash out banks and move the location of rivers (much as it did with the Rio Grande before dams controlled the run-off). This is actually an important part of the process as it distributes organics around, speeding the process. Without periodic flooding, that 500 year maximum might be an optimistic minimum.

Also, note that 300 inches of rain a year will cause massive initial erosion. The existing landscape would be dificult to recognize after the first 20 years or so. But, once plants started kicking in, the amount of rain wouldn't change things that much, other than to make the area difficult to inhabit.

If what you're looking to do is transform the Sahara into a rain forest, you'll need a great deal more time than a century. It might take a millenium. Rain is necessary, but not magic, and more rain won't speed plant growth. Once you reach a maximum saturation point, all you get is run-off.

That is a lot of rain

Runoff will carve rivers as excess water goes to the ocean. Take a look at the basins to see what will happen. 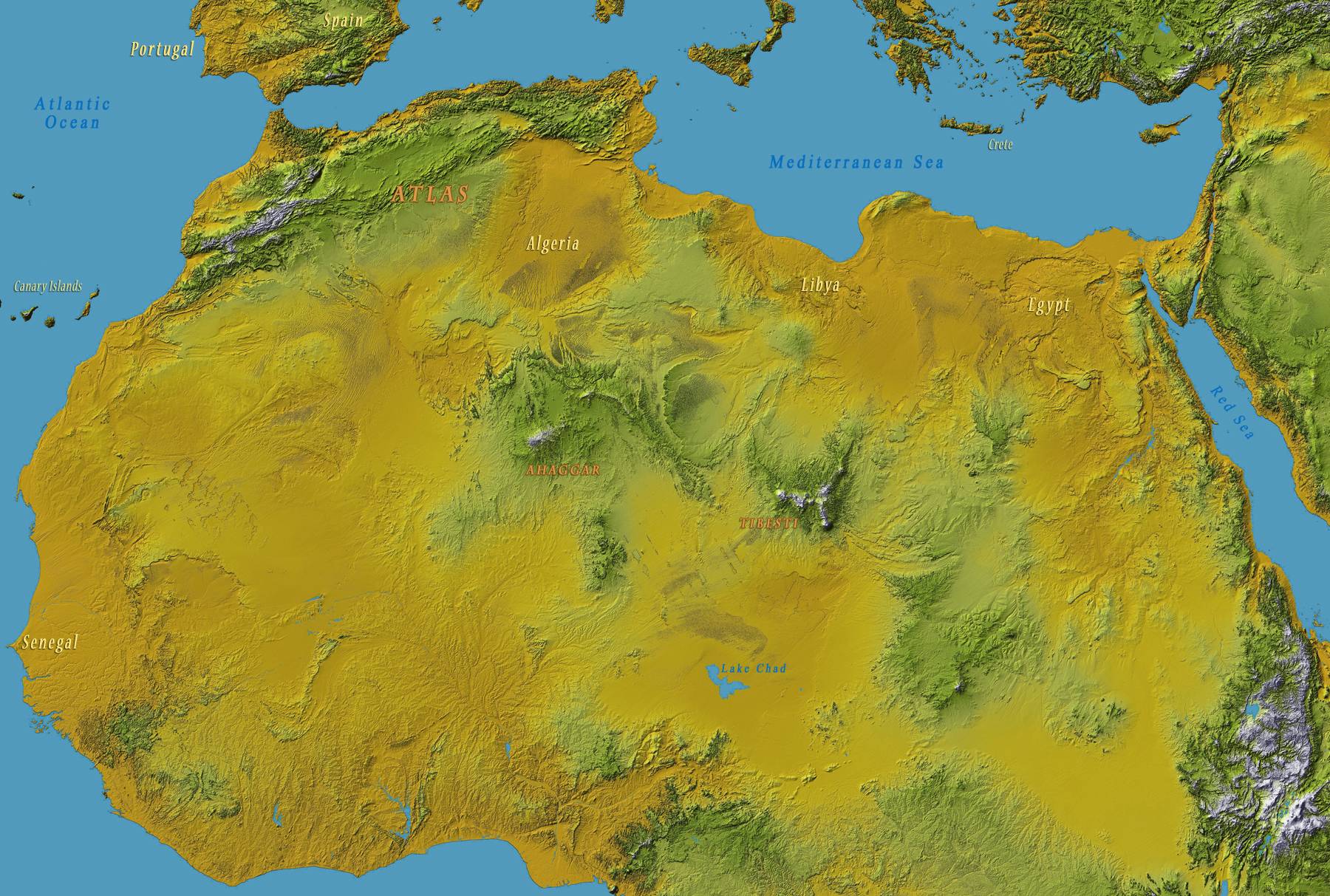 It appears there will be five basic river systems. There will be an Algerian system, gatheringr rainfall from the north and west of the Haggar ranges and emptying into the sea in southern Tunisia. There will be a Libyan system, emptying the east of the Hagar ranges and everything north of the Tibesti mountains into the Gulf of Sirte. There will be increased Nile runoff, with some collection in Egypt, and more in the Upper Nile region. Lake Chad will fill to the brim, probably forming the largest lake in the world before overflowing and emptying into the Benue river and then the Niger and Atlantic. Finally, the rest of the runoff will gather into the upper Niger. Given the amount of rains involved, the Niger and Nile will probably both rival the Amazon in size.

Because there are currently no plants, there will be a lot of sand lost in the first decade, given that much rain. Infact, I would venture to say that you will lose all the free floating sand in the Sahara. The rivers that I mentioned will form enormous deltas as all that sand is thrown into the sea. The Nile's swampy delta will reach Cyprus; the Niger's to Gabon. The Mediterranean in particular, with three massive rivers running into it, will be very much changed.

There are plenty of rainforest fauna in both West Africa and Cameroon, not too far from this magical rainfall. From here, plants and animals will expand into the new Sahara. This will take some decades probably.

At first, nothing will be able to live. The plants of the Sahel region to the south and the Mediterranean coast to the north will not be able to survive the wet enviornment. Mediterranean plants such as dates can't pollinate if summer rains ruin their flowers; olives can't survive waterlogged soil. The plants of the dry southern savanna (Sahel) will also fair poorly. Until rainforest plants get to the region by whatever means, nothing will grow. This process will take decades.

Eventally you will have a rainforest

The slopes of Mount Cameroon recieved the kind of rainfall that you are envisioning, so there are clearly plants that will be able to survive this environment. Eventually, the landscape will look like those tropical forests. But given the time it takes to grow trees this tall, it will take several centuries before the plants propagate in the required densities and grow to mature height. 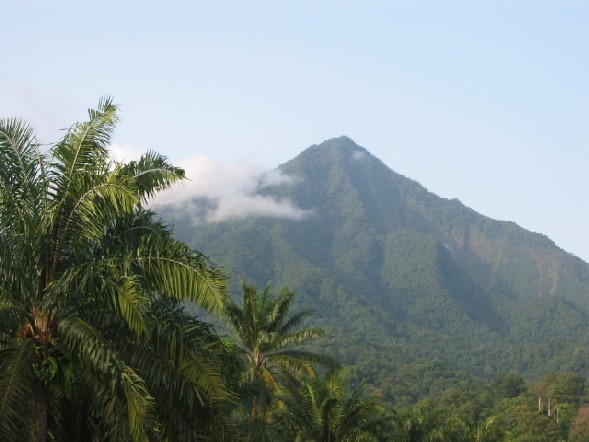 You would immediately get humans moving in and cultivating the land. Sand isn't great for most crops, but there are plenty that can be made to grow with a bit of help. There are plenty of examples of desert gardens in the World even with low tech.

With this input you would soon see more and more cultivation and probably within 100 years the desert would be a sought after and probably fought over land.

The biggest problem would be the soil composition. Sahara's soils are underdeveloped due to reduced organic matter and water so they aren't very fertile and wouldn't be able to sustain a forest, that's why even with a lot of water you would need to wait for the soil to develop (keeping in mind that rainforest's soils took many years to form) while ecological succession takes place. Some sources say that process takes from 500 to 3000 years, but it should take more time since the Sahara has a lot of sand.

But the amount of rain you are proposing could be too much. A lot of water can be damaging by stripping the soil of it's nutrients, reducing its oxygen levels and killing small plants that might start to grow as well as microorganisms, insects, etc and thus getting in the way of turning the desert into a forest.

My brother lives in New Mexico in a part where they average 7 inches of rain a year. I asked him what would happen if it got a typical mid-western pattern of 25-30 inches a year.

"Floods, landslides most of the vegetation would die."

The land isn't covered with vegetation, so the erosion will be immense.

In large parts of the Sahara the aquifer isn't far below the surface.

With 300 inches a year, you have enough water to saturate 75 FEET of sand. Most of it will run off. Hopefully you end up with a large number of fresh water lakes, which will allow you to practice experimental lake ecology on a large scale.

Overall I'd do nothing until the sand stopped moving, then on the gravely bits I'd try plants that fix their own nitrogen, and that tolerate soggy roots.

You're talking crazy amounts of rain for a hundred years. The Sahara's soil is not really designed to host life, and even with tons of water every year, you still will not be able to get the forest I can see in your head. It took a long time for the a rainforest to turn into one, so if you're thinking about adding an entire layer of sand to the mix, ummm....

With even 304 inches of rain, it would still take a thousand years to make the Sahara even habitable, and that's not even a rainforest! Decrease that thousand years to one hundred, and all you're going to get from this much rain would be just mere shrubs and grass. If the rains abruptly stopped, and the weather returned to what it is now over that desert, those traces of vegetation will be gone by the end of the year!

And, as mentioned by cls, that much rain may be too much, as it doesn't take a degree in biology to know that the amount of water you are proposing will probably wash the nutrients in the soil away, therefor you'll be nullifying many chances to grow a forest. You're also going to be killing much of the plants and animals already adapted to life in these conditions, and it isn't likely those life-forms will be coming back until you stop the rain.

Not the answer you're looking for? Browse other questions tagged science-based reality-check earth weather or ask your own question.

16
What would happen to the Earth if Gravity disappeared?
6
Rate of deterioration for asphalt/blacktop and road signs
6
If the earth gradually stopped spinning, what would the changes look like in 20 years?
46
What would happen if the Earth struck a tiny but immovable object
10
What happens to corpses left in a desert for many decades?
3
Are there any crops or agricultural practices well suited for a cool and very wet climate?
7
What would the effects be of a warm, sunny tropical island located in polar waters?