How would weather change if the distribution of land were very uneven?

I have a map for my new word but I am not sure how the climate and weather would realistically work on this map. Axis tilt and position to Sun is the same as Earth, with two moons. 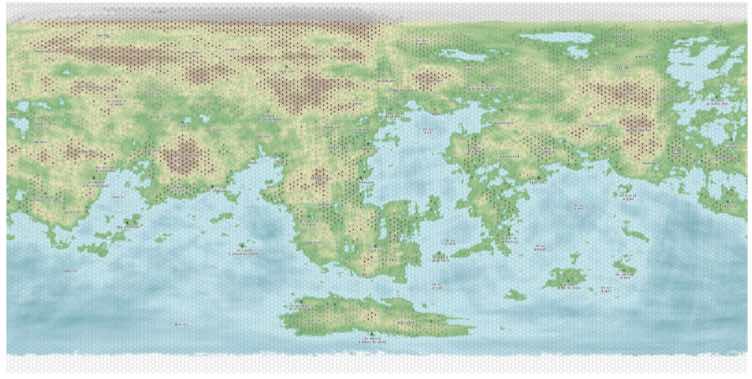 You have relatively small oceans and a huge continental landmass occluding the whole north hemisphere.

This means oceanic current can only tour around southern pole with some waves going north.

North pole would be buried in kilometers (vertical) of ice.

It seems you have mountain ranges shielding most plains from sea influence; this means a large part of continental plains is probably going to be desert.

Coastal areas would be survivable, especially the two large peninsulas near the center of the map.

I would expect large hurricanes to build up in the mostly closed sea in the eastern part and, possibly in the almost fully closed central sea sea.

You may have very large "torrents" flowing south from northern glaciers during the melting season (especially so in the western part).

Best bet for a settlement would be the northern coast of the southern large island and the two large archipelagos.

ZioByte's answer is completely valid, but climate has a lot of narrow tipping points which if off slightly could change things drastically. So I'll offer an alternative vision.

The entire northern hemisphere is almost completely continental. Without any access to water, there is little snow formation. It is instead mostly scrubby cold desert. Also your planet has much less surface water than Earth; therefore there is much less cloud formation. Without clouds and snow, your planet's albedo is much lower than Earth's, so it absorbs more solar energy. So even though you are at the same distance from the sun, your planet is much warmer than Earth.

The North pole is highly continental desert, similar to the Gobi or Great Basin of North America. The 'lakes' on the map at high latitides don't exist, they are simply dry basins, possibly with salty lakes at the bottom, like the Dead Sea or Lop Nur.

Due to high temperature fluctuations and high altitudes at the poles, the entire planet acts like one gigantic monsoon generator. Your entire northern hemisphere undergoes monsoons five time stronger than what is seen in India. The Equatorial regions are drenched rainforest. The subtropical regions up to 30 N recieve 3-5 months of unbelievable rainfall. Farther north, the rainy season shorten and quantities taper off.

Since rainfall is a primarily North-South affair, the south face of all mountains are extremely wet, especially during the monsoon season. The north faces are much drier, and mountains cast a rain shadow to regions north of them.

Not the answer you're looking for? Browse other questions tagged science-based environment climate weather .

3
What would be the major weather patterns on this map?
1
Constantly sunlit/shadowed regions and weather
10
How would this tidally locked planet be affected by its moon and would the moon have a deaccelerated orbit?
5
How would the weather be affected by a constant miles-wide maelstrom?
2
Would a temperate "land of the midnight sun" be habitable?
5
Reality check; minimal axial tilt = minimal seasons/mild weather right?
2
What's the climate consequences of a planet with these characteristics?
0
What's the best climate for the extremes of a supercontinent that doesn't exceed latitude 55 and don't have ice caps?
2
How hot would daily highs get if it were always the summer solstice in the Northern Hemisphere?