How would two Jackalopes fight each other?

Considering a world with Jackalopes.

These half-rabbit half-antelope creatures stand a little over 2 feet long when fully grown and have horns like a deer growing 1 to 2 feet in length. Like deer, only grown males have horns, females and young don't.

They all have superior musculature and bone structure to their rabbit cousins, especially in their hind-quarters, making them able to jump astoundingly far (and kick you terrifyingly hard, not to mention ramming those antlers into you). Also, strong necks to hold up those prodigious horns sprouting from their heads.

This is a pretty good approximation of what we're considering here.

Now my question: How would such beasts fight one another? Teeth? Antlers? Kicks?

Answers based on similar species real-life behavior are considered best. Physical considerations of having such large horns are appreciated. 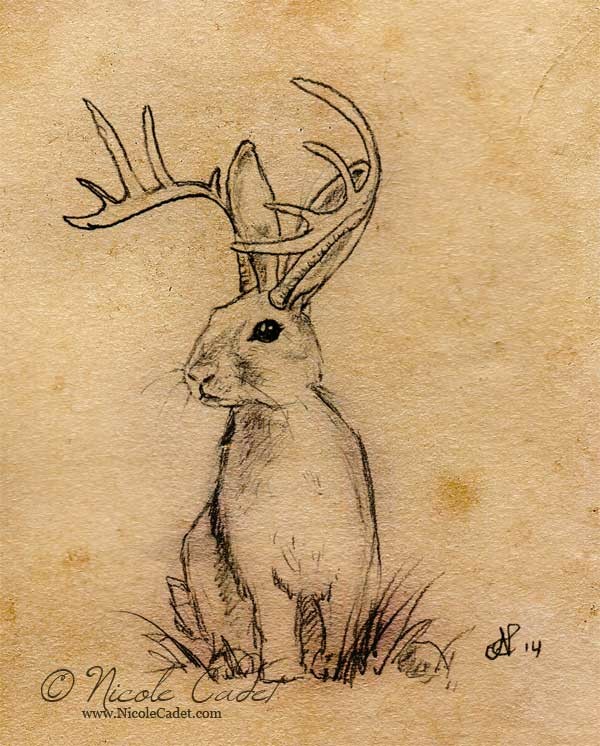 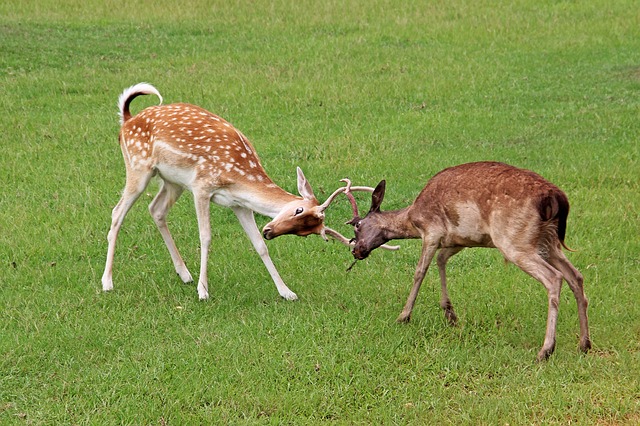 Chital, also called spotted deer or axis deer, from India are the smallest deer that I could find with a large tined set of horns. Males are in the 35-50 kg range, so a good bit bigger than I think you intend your jackalopes to be, but not any bigger than a large dog (although they are taller than almost any dog).

This one isn't really called fighting... 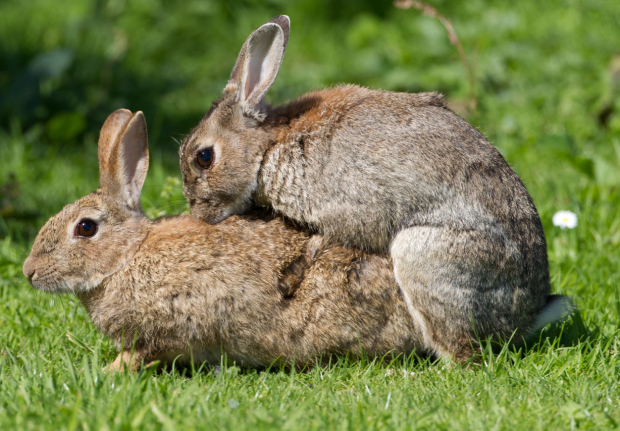 Either vs. Predator: Run 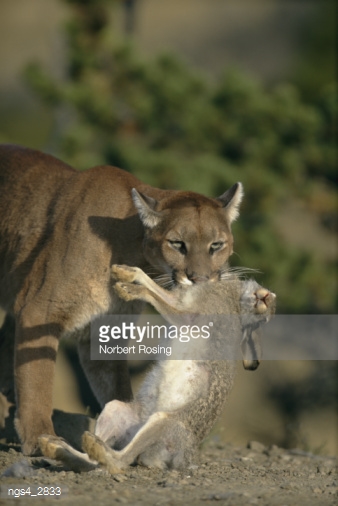 Unless they are the size of a bull elk (300 kg or so), no herbivorous animal is going to stop and fight a cougar. Same goes with a wolf pack. A jackalope would run.

Let's look at how rabbits commonly fight, merge that with the use of antlers, and especially take into consideration their movement and mannerisms.

There are a lot of different rabbit types, but their fighting style tends to differ primarily based on their size.
Smaller Rabbits fight similar to guinea pigs -- jerky movements and nipping at each other.
Larger Rabbits have more fluid movements (relatively), assume dominant stances, and do very little to hurt each other -- relying more on their awkward slap-dance of intimidation. 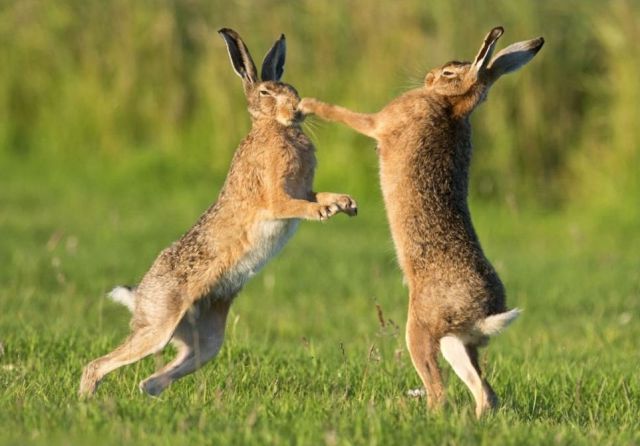 Conveniently enough, intimidation is also the primary tactic of most animals that feature antlers. Fighting is usually a harmless dance where both sides stand at a distance, assume intimidating stances, thrust and lock antlers, and perform what is essentially a horned version of arm wrestling.

Assuming that jackalopes would likely be a larger rabbit (to accommodate having antlers), taking into account the movements and mannerisms, perhaps it could occur like this ...

Narrative:
Both sides approach and begin to closely circle each other. Their eyesight remains locked as they grunt angrily, emphasized with each movement. In unison (and as if on cue), they raise up on their hind legs, stretching to increase their height, intent on intimidating their rival.
With neither side yielding, they lunge forward, a single hop, landing on all fours, antlers locked.
Their heads down, and eyes clinched shut, they feverishly move their heads from side to side, antlers clattering.
Then, just as suddenly, they quickly step back -- their small noses flaring and snorting from combined exertion and frustration.
Only a brief moment passes before they raise up to begin the dance once more, determined to make their opponent relent.

Something to consider is whether the Jacklope has horns or antler. These are two different things and will heavily impact how the Jackalope behaves. My answer tries to cater for both scenarios. 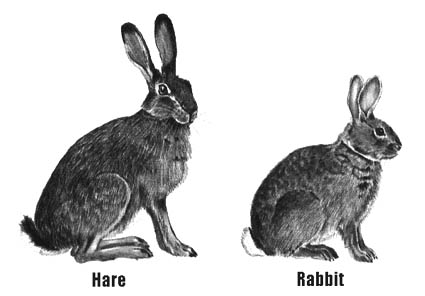 The hare can grow to 70cm (2.2ft) which is approximately the size of the Jackalope. A rabbit at full size compared to a hare (or in our case a Jackalope) is considerably smaller, especially when you weight in the upgraded bone structure, muscles and the fact that the male Jackalope has horns/antlers up to 2 feet long on his head! So a rabbit looking up to a Jackalope is going to be scared.

Jackalope will only fight during mating season, when their antlers are fully grown. They have a free for all, male vs male all fighting for the idea mate. The same principles apply that after the battle the losing Jackalope is outcast from the colony, or doesn't get to mate easily, perhaps even at all that season.

Jackalopes also have a few other tricks up their fur, they have razor sharp teeth and tremendous strength on their hind legs. Jackalopes use their rear legs to attack other males. During a male versus male battle, spectators (particularly other males) interpret this as a display of desperation rather than strength, and is usually only used as a last ditch effort.

Teeth on the other hand are a rarely used attack, this is due to the large size of their antlers/horns. It is very rare that another male will be able to get close enough to bite their opponent, especially without receiving some kind of reciprocating attack. However when they do; their long teeth penetrate into their opponent causing a deep wound. This wound leads to some blood loss, but is typically not fatal. In longer duels however, with hearts beating at maximum, blood loss becomes a very serious problem.

Males do not attack the females, however females do attack the males. If the male in question has defeated the females mate the female will attack using her razor sharp teeth and powerful kick.

The male does attack back but only in self defense, should he feel threatened. The male will refrain from using his horns/antlers out of respect for the female, and he will instead, use kicking to push her away or hurt her enough to make her think twice.

Intentional or not sometimes the male kills the female. When this happens the other Jackalopes lose respect for the male and outcast him from the colony.

As you might have guessed Jackalopes are a respectful species.

The Jackalopes predator would have to be fast, a cheetah would be a good animal to use as an example. The Jackalopes cannot out run a cheetah but can make much more precise and agile movements, this is where the Jackalope really shines. 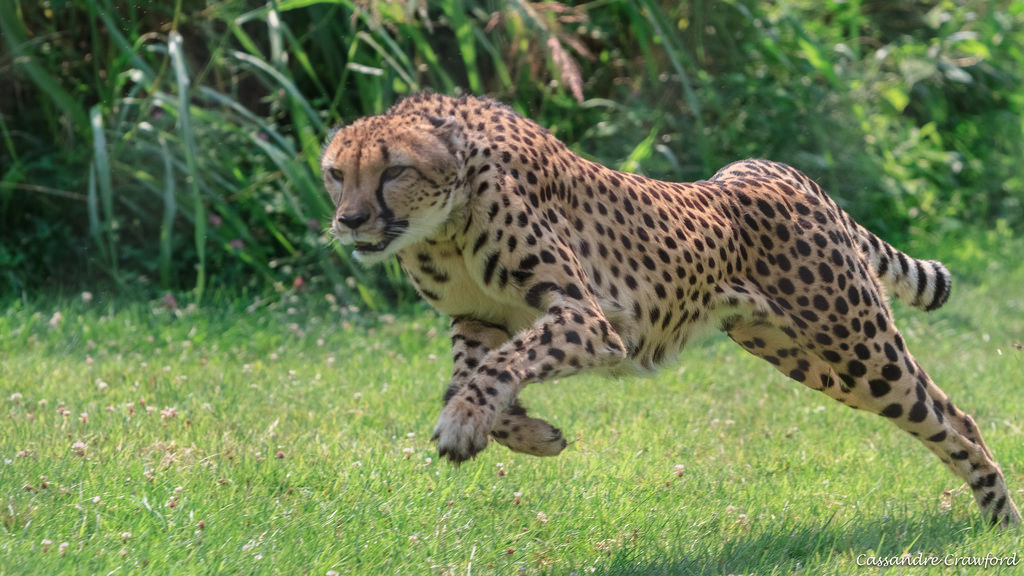 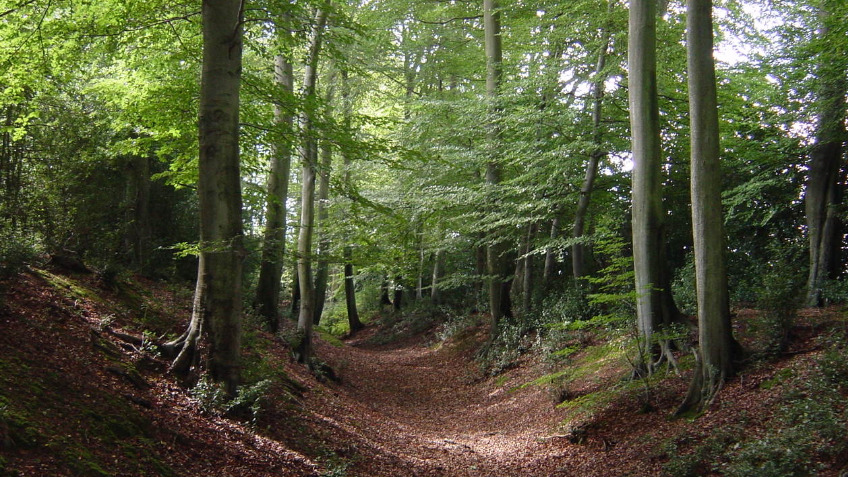 Because we are assuming woodland there is the possibility for logs, burrows and bushes to hide in that are much too small for a larger predator to fit in. Should a hiding place not be available the Jackalope will run until it begins to feel tired, at this point it will slow down and wait for the predator to get closer. The female will wait until the predator is very close and will the attack using its rear legs, aiming for the head as much as possible. With such fast and powerful attacks to the face, the typical predator either backs off or pushes through the attacks. This type of attack however tends to lead to being eaten more often by predators.

The male on the other hand uses a similar tactic, except he has horns/antlers. When the male Jackalope turns around to face his opponent he becomes a bigger problem than the predator initially thought. With 2 foot long horns/antlers in his face it becomes a lot harder to grab him where it hurts. He will then use his horns/antlers to attack his opponent by ramming and swiping at his foe.

Because the Jackalope is 2 feet long the risk of aerial attacks are small to none, (unless of course this isn't based on Earth as we know it) so we can rule that out. The same goes for aquatic threats, unless the Jackalope is living near water large enough to house potential predators, they shouldnt have any problems there.

The typical rabbit is scared of the male Jackalope, although it is known for male rabbits to mate with female Jackalopes and vice versa. This is frowned upon by the colony and is a very rare circumstance however rabbits do not care and are always trying it on.

This means that when rabbits try to invade their territory there is always a male close by to fight them off. Due to the Jackalopes superior strength and size the typical rabbit runs away whilst others fight but ultimately lose having achieved nothing.

Antlers would be useful against predators because they keep the hungry mouths at a safe distance much in the way early lion tamers were shown to use chairs. An attacker could end up not just with a mouthful of horn but possibly put out an eye. In fights with other jacks it makes sense for antler fighting to be reserved for sort of friendly displays put on to impress mates or settle dominance disputes ie without the intention of real harm and usually resolved by the weaker one submitting.

Anyone who has raised rabbits knows their bite is nothing to ignore and they box viciously clawing the underbelly. I assume that jackalopes have evolved past the problem their Leporidae cousins have with blood pressure that causes them to faint while having sex or frightened.

I got thinking about the philosophy of fighting in the two component species.

Deer posture. They fight, but in an attempt to identify which rival is superior, this year. Once decided, they more or less peacefully go their own way.

So what does a Jackalope do? Fighting with the intent to maim with ANTLERS... that seems like it would get REALLY messy. But bunnies breed fast, so there will be a whole bunch of fresh combatants next spring.

Posturing bunnies are certainly an option... but a pretty boring one.

I was visualizing Jackalopes vs. Predators and I realized something... Rabbits bolt. Hard and Fast... a spooked bunny is just GOING... and they change direction like lightning, reversing their direction effortlessly.

Now picture that same bunny with several pounds of antler on its head.

I think the youtube videos of "Jackalopes attempting to escape" would be hilarious but really sad. The coyotes would get REALLY FAT.

Like bull elk, they raise themselves off their front feet and use their hind quarters to drive towards each other in an in-and-down motion. Given the agility and high power back legs of the Jackalope I would think a fight between them would look pretty similar to two bull elk in that a lot of the horn clashing motion is vertical but with less binding and horizontal pushing, and more clash and release and clash again as they hop around looking for a flank advantage. A rabbit style hop mode of travel leads itself to this even more than in the elk.

Not the answer you're looking for? Browse other questions tagged science-based biology fauna outdated-science .

16
Is a four armed arboreal reptile as described viable?
13
Why would Mars rovers talk to each other?
16
Why would two humanoid species be physically unable to touch each other?
45
Could two planets follow the same orbit and never "see" each other?
4
Can moons counteract each other?
8
What would prevent chimeras from reproducing with each other?
4
Could two separate creatures' health, or life, be dependent on each other?
0
How can I force siblings to fight each other for the privilege of being born?
5
Is a four-winged bird with two wingpairs atop of each other feasible?