How long would it take a civilization to see and understand a Dyson ring?

If a star had a Dyson ring of some kind around it, such that to the naked eye the star wouldn't dim at all, how long would it take a civilization to reasonably see and understand the Dyson swarm, assuming it was between the planet and the star? Would the orientation of the swarm greatly change when it would be detected and understood?

I would imagine a swarm on roughly the same orbit plane would create regular 'sunspots', while a swarm on a 90-degree tilt would very rarely transit across the sun's disc. Would this change greatly with a solid 'ring' structure rather than a swarm? How long would technology need to progress before such a thin 'ring' would be visible? Would a small enough body for the ring/swarm never be accurately detected?

Edit: for clarification, I'm considering a Sun-like star, with the observers' planet being functionally at 1 AU. I'm talking more about an observation of the local star than observing distant stars. I would also imagine the size/distance of such a Dyson ring would significantly affect things. Definitely a smaller radius than Mercury.

Anywhere from ancient times to the present.

Question 1: Is there anything there? (answered pretty quickly)

Sunspots, for instance, were first observed by the Chinese in 364 B.C., two millenia before telescopes or camera obscura were first used to study the Sun! While I don't know what the Chinese used, you can see sunspots using a very basic solar telescope. It projects an image of the Sun onto a surface; sunspots - if they're big enough - show up as small black dots. You can actually track their motion, and that of the Sun. It's quite simple, and it's fun. I've enjoyed doing it. 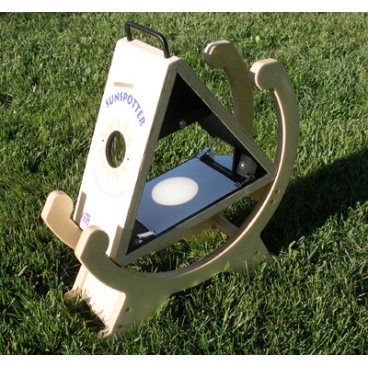 A simple solar telescope, sort of like the one I've used.

I would assume that a Dyson ring would also show up on such a telescope (although I can't test it out). It should dim the star in certain places, showing up as either a black ring or a series of small dots. Assuming they're large enough, and the ring's thick enough, you can see them - and all just using a pretty simple instrument.

Also, consider KIC 8462852, also known as Tabby's Star. A couple years ago, Tabby's Star made some headlines because of unexplained dimming. Its light curve didn't match any of the patterns you'd expect to see from an F-type star; the dimming was large-scale and highly irregular.

Some people thought that the cause was aliens, trying to signal something, and that's what made headlines. What I remember Tabby's Star for, though, are the other hypotheses explaining the dimming:

The last two scenarios are similar to what you're talking about here. Assuming that KIC 8462852 has dimmed because of a cloud of bodies like this, we can detect such a disturbance from over 1,000 light-years away.

With fluctuations of that magnitude (~22%) - and I'd assume a Dyson ring would cause such fluctuations - the civilization could figure out that something was there as soon as observations of their parent star started.

Question 2: What is it? (answered pretty slowly)

So, there are objects around the star. That much can be determined. But what are they? Are they natural? Are they artificial? If so, who made them? How do they work?

Think back to KIC 8462852. We thought up a whole bunch of things that could be causing the dimming. All of them seem realistic. But would any of them have occurred to a primitive civilization? Remember that early astronomers didn't know much about our Solar System. For instance, it took Galileo to figure out that Jupiter had moons, and Huygens to determine that the bulges around Saturn were rings. Planetary rings weren't known about by the early Chinese. Comets were observed, but nobody knew their true nature.

So, they'd really be stuck for ideas. I guarantee you that they wouldn't come up with the idea of a Dyson ring - going to space would be pretty far-fetched. Remember, they might not even have a heliocentric model. However, if you fast-forward a couple millenia to a civilization like our own - one that's sent probes across the Solar System, to study the planets, the Sun, and many other bodies - then you'd have find a group of astronomers who can figure it out.

I'm going to posit that on Earth, someone would have figured this out by ~1900 (i.e. pre-space travel), maybe a bit later. But acceptance of the idea would depend on a few things:

Figuring out these societal beliefs can give you a better idea of the time frame you're looking for. It will be dependent on telescopic development.

Not the answer you're looking for? Browse other questions tagged science-based astronomy megastructures or ask your own question.

6
Seasonal progression for an Earth-like planet with wobbly axis tilt?
4
How extreme can I make an altered solar cycle without destroying an inhabited world?
5
Orbital configuration for a stellar beacon
2
Visibility of a Dyson ring/swarm
3
How long can a moon remain non-spherical, and what might it look like when full?
6
How far out can a pre-telescope human society (naked eye observations only) detect planets?
6
How to create an artificial hurricane?
5
Ways for advanced civilizations to mask communications on an interstellar / intergalactic scale