How heavy would a Naga be? 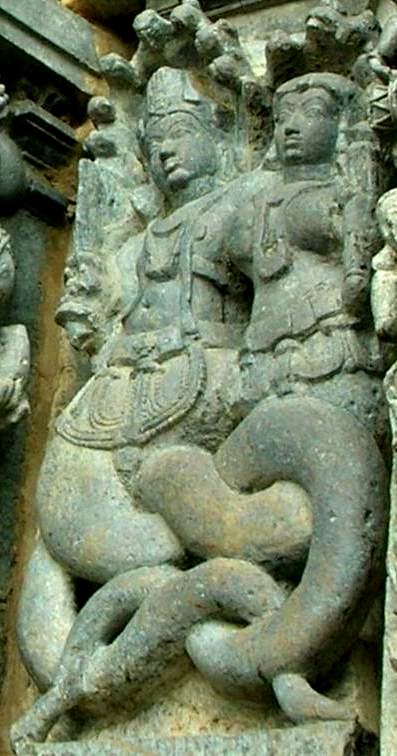 Those statues will be pretty darn heavy... but what about a flesh-and-blood naga? The torso of a human connected to a snake's body? I've seen some pretty extreme estimates on their weight... DnD thinks a 12 foot naga would weigh about 1500 pounds.

So, let's work some parameters for our Naga.

The human part, we'll use a 250 pound male. That is, 200 pounds if he had legs. Legs are approximately 40% of your weight (varies from person to person). Without his legs, that means the human torso weighs approximately 120 pounds.

Properties of a snake

How heavy should a Naga be? Well, here's some snake trivia to help you decide.

I have not had time to do proper research onto the length of snakes relative to their weight.

However, remember that the proportions of a snake are different from those of a human.

A snake's head is narrow and thin, with a small brain, and a long thin neck. The thickest and heaviest part of the snake is approximately a third of the way down its length. So, the first third of a snake is pretty light, and is the second thinnest section of the snake. The last third, the tail, is the thinnest and lightest section.

But, with a Naga... you have a big human head with a big brain, for starters. Then you have broad shoulders with long arms, with lots of bone and muscle. Then you have a broad torso. Instead of the front of the snake being the second-lightest part, it's going to be the heaviest section, almost certainly.

Also, to stay proportionate, the snake part that meets the human is going to have to be of similar thickness to the torso. If the snake part was very thin... it'd look a bit like this. And as much trouble as that woman has sitting down and moving around, it'd be far worse for a Naga, who would have most of its body mass choked-off by a very narrow area.

Thus, the proportions will be like this. Thick tail where it meets the torso (about a foot in diameter), which quickly narrows down to a thin tail. Thus, you'll need a pretty long, heavy tail in order to move the naga's upper body around.

So How much do they weigh?

Depends on how long we make the Naga, and the thickness/heaviness of the tail.

The barest possible minimum I figure, is 10 feet long (including the human torso). So that's 7 feet of snake, 3 feet of human, two thirds snake.

A more reasonable length would be 12 feet long. 1/4 length in human, 3/4 snake, approximately.

I figure the most useful estimate would be one about the 12-foot Naga.

But, if you prefer, you can make weight estimates on one of the other examples, or one of a length of your choosing.

It depends on how the thing is made, biologically and how much weight a large backpart would be needed to move the heavier front, as you state.

Take the waist measurement, make that the diameter of an imaginary cylinder and the length of the snake body as the cylinder's length (tapering as you see fit) then calculate the volume and assume it's full of water, the body is mostly water and the influence of denser and less dense tissue (like bones and lungs) generally evens out.

Alternatively consult your local zoo for length/weight/diameter measurements of a snake of your choice then scale up the figures until the length seems about right.

And from these measurements, I can estimate the weight of any length of naga.

Are you talking about 'real' nagas? They don't have 'weight' in the same way that material animals do, because, even though they often include a material dimension, they are not limited to a material dimension. Like many other beings, they are emergent rather than corporeal. The question you are asking is rather like asking how much 'Microsoft Corporation' weighs.

10
If a naga was 7' tall how long would it be?
20
Anatomically Correct Naga
1
How do you kill a kraken with medieval technology?
9
Would Naga be good at throwing grenades?
9
What would Naga marching-formation look like?
5
Could Naga Reload Muskets while Marching?
7
Anthropomorphic flying squirrel, gliding capability
4
Naga evolution based on varanids
1
Could a creature use its tail to move on land?
1
Anatomically Correct Kampe