What kind of natural disaster could create a permanent, global cloud cover?

“Permanent” here meaning “significant over geological timespans”, so it would have to last at least 10,000 years and produce a thick enough layer of clouds that it would cover the entire planet in an everlasting dusk. No sun, no stars, no sky. Just endless, dark grey clouds. I have an inkling that a truly calamitous and unfortunate series of coinciding volcanic eruptions and large meteor strikes within a short enough time period might be able to accomplish this in part, but I’m not sure how long the ash cloud-induced ice age would last or how long the planet would remain dark.

Ideally I’m aiming for some civilization-destroying catastrophe that accomplishes everything I’ve described, but is still only just hellish enough that a medieval-level society might be able to survive and eke out a living in the aftermath by farming algae, large insects, and bioluminiscent fungi. This would be taking place in a fantasy world, but I’d like my supernatural disasters to remain explicable by conventional means as much as possible for personal reasons.

Is there any natural explanation for a disaster that would produce the effects I’ve described? What might some of the consequences of a planet like ours entering a ten thousand year-long Dark Ice Age be based on whatever explanation you can think of?

A permanent cloud cover is tricky

To have a stable cloud cover you would need either much higher evaporation, or something that causes a higher rate of coalescing (and at lower water saturations). The former requires higher temperatures and is unstable (higher temperatures cause further evaporation etc., until you get a "runaway greenhouse effect" and cook the planet). There is an equilibrium factor given by the fact that more cloud cover raises the planet's albedo, leading to a loss of incoming solar energy; nobody knows for sure whether pushing the equilibrium from its current position to another can be done, and whether such a new equilibrium exists.

Increasing cloud formation can be done through very fine dust (volcanic dust might do), or through other mechanisms such as cosmic rays.

Both mechanisms, as well as a large cloud cover, are at risk of making the Earth uninhabitable in the long run.

However, the Earth's entering a region of space with stronger cosmic ray background, and/or a weakening of the Sun's protective solar wind envelope, would result in a cloudier planet. This too risks triggering a runaway effect, but this can probably be handwaved away (the equilibrium would simply move towards a more humid, hotter planet with higher albedo).

The trick here is that what is gloom for a human eye is not necessarily a big issue for most vegetal life-forms. Yes, tomatoes and other plants using mostly lycopene and $\beta$-carotene would sort of get it in the neck, but lots of other possibilities remain. 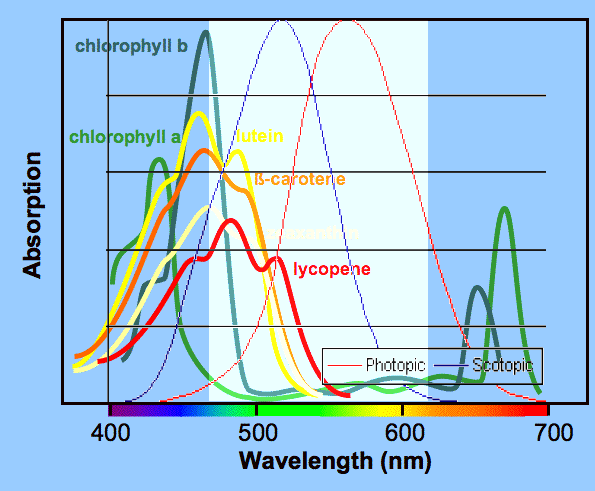 Basically you need something high enough in the atmosphere - 4000 m, unless you want light to reach the tallest mountains - that will heavily absorb in the 460-630 nanometer range, where human eyes do most of their seeing. The line that interests us here is the blue one for scotopic vision, since photopic (full daylight, full colour vision) isn't going to do much good anyway.

As to what... several doped silicon compounds have a pretty sharp absorption area in that range, and can harvest solar energy; indeed, there are applications where the invisible wavelengths are harvested, to build something that is both a clear window and a solar panel.

All that remains is picture a self-replicating autonomous system that uses silicon "butterflies" to harvest energy -- in the wrong part of the spectrum. It could have started as a means of reducing the global warming and solving the energy supply problem, until the frequency switch turned it into a nightmare.

There is a problem here, however, no matter what kind of hazing material you come up with.

A lot of energy is going to not reach the ground, which means global cooling on a worrying scale - global glaciation scale, even.

Perhaps you could explain it off the other way - the global shield was designed to cope with an increase in the solar constant. When the necessary doping materials were exhausted and the shield started shifting frequency, the part of the program that controlled the energy balance remained in effect, and the required heating is now coming mostly from the near infrared and red wavelengths.

Vitamin D deficiency is going to be a big issue though.

Ash will eventually fall down, definitely within your 10,000 years so a greenhouse effect (much like Venus' atmosphere) was the next option to spring to mind.

There are massive methane deposits in the ocean which can be released into the atmosphere:

When methane hydrate is mixed with sediment on the ocean floor, it prevents the sediment from solidifying properly and leads to instability. Undersea slides are dangerous for two reasons: they can release methane into the atmosphere, already established as a bad thing, and they can cause tsunamis.

So, something triggering huge undersea landslides - a meteor, an earthquake or even just a landslide waiting to happen.

Now, this is pretty catastrophic. Venus is pretty hot (could melt lead on the surface), largely due to its greenhouse effect. On Earth a runaway greenhouse effect would end up with temperatures of 1400 degrees Kelvin. There isn't a timescale given but perhaps, for the sake of the story, some measures were already in place to revert global warming and so it has drawn out the inevitable greenhouse effect - giving you a flexible period of time where, whilst hot, humans can still survive.

You have to get rid of the water

There are a great variety of chemicals you could add to the air to make a hazy cloud cover. The problem is that Earth has an active hydrological cycle, and so will eventually remove most things from the air. Nearly everything chemically reacts with water one way or another, and a great many gasses are soluble in it. So most things you could put in the atmosphere will be stripped by rain and end up in the ocean, where they will be diluted to near uselessness.

So you have to get rid of the water. Now, this is much easier said than done. The Earth has a lot of water. The ocean is a little less than 1/10 the mass of the moon, to give you some perspective. Driving it off isn't necessarily super science based, but this is tagged magic so lets go.

Once the water is removed, it is somewhat trivial to find something to cloud up the atmosphere. Sulfur dioxide, or example, makes wonderful clouds on Venus, reflecting nearly all the light striking the planet back into space. On Earth it is soluble in water to form sulfuric acid, which then rains back to the Earth, accumulates into the oceans, and eventually gets stripped into the sediment.

Without water, there is no mechanism for removing airborne SO$_2$ gas, so it will just build up with every volcano. I'm sure you could come up with a dozen more chemicals that would work this same way. So you don't even need to pick a certain chemical; just say that with 99.999% of the water removed from planet Earth, hazy clouds of volcanic gases start to block out the sun.

All you actually need is something blocking incoming light. Still I see just a few non-disastrous possibilities for Middle-age civilization here.

Something big (think 0.001 Moon mass or more) crushed into fine dust in the nearest vicinity of a planet will eventually form a disc (after several million years), but initially it may be a widespread cloud wrapping around planet. Having magic around can explain why the comet is dispersed so thoroughly and no big chunks have reached the surface and killed everyone. Dust cloud can't be dealt with using our current capabilities, but will lead to a variant of the ice age that will make current civilization shrink and maybe step back a few tech levels.

Beasts that have chloroplasts and can stay in the air indefinitely long. Those may form the ecosystem akin to multi-layered forest, where bottom layers feed off the wavelengths not consumed on the upper ones, thus blocking most light from reaching the surface. Where have they been before, and why have appeared is up to magic. Or it can be nanomachines in a sort of constrained "grey goo" state, if you wish. Another ice age scenario here, though scientists can discover ways to kill them.

Somewhat mild disaster, that utilizes increased sea volcanic activity to continuously send more vapor into the atmosphere. Still, volcanoes change faster than required by OP, growing new cones and even islands in a matter of few months, which can cease vapor production. Also, more clouds mean higher albedo, lower temperature and more rains, because vapor will condense faster. Not quite disastrous, because it will probably end sooner than modern civilization.

Not the answer you're looking for? Browse other questions tagged magic climate natural-disasters climate-change or ask your own question.

4
What species, if any, would survive this kind of apocalypse, and what would global environment be like?
5
What human-induced disaster could cause permanent fog in an area the size of New York City or larger?
7
What would happen if a large area had permanent cloud cover?
51
What natural phenomena could make an island unreachable?
5
What natural event could strip all of Earth atmosphere?
3
What kind of extinction event could solve Global Warming?
6
What type of natural or artificial disaster could devastate a multi galactic civilization?
5
What disaster could wipe out civilisation worldwide, but allow for immediate rebuilding? What would be the side effects?
26
Could a natural disaster completely isolate a large city in the modern world without destroying it?