But how does this work when you have naga (left in the picture)? 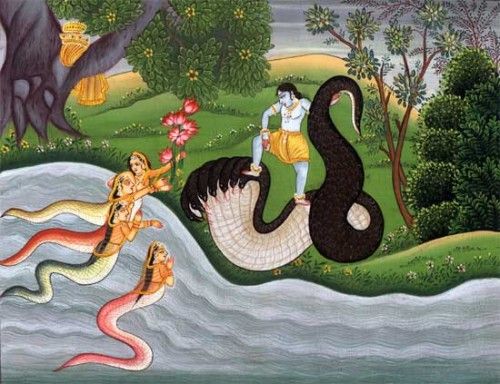 Their snake tails, particularly if very long, are going to make a tight marching formation very difficult, or even impossible.

With this in mind, how would an army of naga march in formation? The two types of concern are:

G0blin notes in the comments: "According to this BBC movie, Black Mamba snakes can travel with a third of their bodies raised at full speed (7mph long distance, with 14-20mph for short bursts of speed)."

When travelling in large masses, armies use formations to simplify the logistics and manage the risks of contact with the enemy. Due to differences in their anatomy, human and naga formations would differ somewhat, but not hugely.

Human formations are typically organized as a grid in ranks (rows) and files (columns). The spacing between soldiers in a rank is called "dress". A normal dress is established when the front rank of formation members can touch the shoulder of their nearest neighbor with the finger tips of one hand. "Full dress" is when the front ranks can touch only the fingertips of their neighbor with either hand.

When travelling in a column on land, naga could be close packed in each rank, like similarly sized humans, but the ranks would be sufficiently far apart from each other to allow for the tail. If for any reason it was desirable to make the formation more compact from front to back, the spacing in each rank could be increased up to full dress, allowing the next rank to come up part way between the tails of the rank ahead.

Due to the geometry of the formation, naga would be able to execute a wheel maneuver, but a turn would be more difficult (imagine getting whipped with the tail of your 200 lb neighbor in a quick turn). Their fancy parade drills would have some maneuvers that would be difficult for human formations, but be geometrically incompatible with some executed by their human counterparts.

On land, they would use many of the same formations that humans do, with appropriate modifications. Porcupine, Turtle, Phalanx, are all reasonable. While backing up is not a preferred action of snakes, it has been filmed in nature, so we can assume the full standard range of mobility of these formations.

A flying V (or wedge) is used to smash enemy formations. It started out as an infantry formation, but is still used by modern aircraft and tanks. For the naga, it maximizes their ability to bring weapons to bear and to defend each other, while avoiding entanglement of the tail with one's neighbor.

Cadence, which is important for keeping members of the formation from tripping over each others' feet/tails, would be different and more subtle for naga than humans, but not less important. Humans marching in cadence can collapse bridges. Unlike humans naga would not have to break cadence when crossing bridges.

Edit for new information from @G0BLiN re black mamba's

Order by size really. The slithering motion of a snake tail is mostly determined by the dimensions of the tail (as far as i know). By grouping naga in batalions of approximately uniform size their natural slithering motion should be quite uniform. Close enough , at least, that any deviation can be consciously corrected without great effort, like a human corrects their walking if someone is walking closely behind them.

On a military note it also helps suppress hierarchies within squads if members are the same size which helps the greater military hierarchy. In humans this is not really that relevant but with a 2.5 magnitude size discrepancy (9ft vs 22ft) "equal in rank" loses some of it's meaning, I would imagine.

Your second concern is also a bit unfounded. Snake bodies move in a essentially different way than human ones. Humans movement falls under "turn on spot" and "move forward". Making a circle is taking a step, adjusting course and taking another. Snake movement is always "make a circle". Their moving forward is making alternating partial circles. This means flanking is a FAR greater advantage than in humans. Humans just need time to "turn on spot", snakes need more time to turn (relatively at least), more space and geometry. A pinned/severed tail is a real threat and disadvantage. Not to mention that getting flanked also means losing back support from your tail. You could (more) easily get toppled. Naga battles would therefore involve far more chaos than human battles. Specializing in meeting an enemy head on would be about as clever as binding a sword on a cannon barrel saying "in case they get close". Technically .... sure, but the situation shouldn't occur to begin with.

Personally (though i am no warlord) I would imagine that arrow volleys would work very effectively against naga: They have a lot of surface area and they can only move with 1/3rd of their body up. Completely blocking a volley would require a bothersome shield, slowing down the nimble half-snake. Stance is also an issue for them: facing forward puts great strain on the abdominal muscles and risks arrows to the underbelly. Facing sideways might leave the first few ft vulnerable. Curling up below a shield would require quite a sizable shield in some cases, would leave them in a suboptimal position for continuing to move forward and any arrows piercing the shield would go directly into flesh, which would make leaving the position painful ,damaging and quite straining on the arm-muscles, debilitating them in any confrontation later in the battle (via fatigue).

They would probably want to avoid all that, which could most easily be done by dividing the archers' attention via a multi-pronged attack or to prevent archers(/arrows) from reaching the battlefield at all.

To confuse and alarm the target, they attack in multiple, crosshatching waves advancing at acute angles and interweaving. Marching to drums facilitates synchronization.

This is accomplished through an easily-learned choreography analogous to Japanese precision marching. The erect portion of the the nagas move like the marchers and the trailing bodies slide over one another.

On cue they can execute additional choreography (like changing direction, leaping, and raising coils along their lengths) for similarly confusing and alarming effects.

Not the answer you're looking for? Browse other questions tagged creature-design warfare mythical-creatures military travel or ask your own question.

11
What would be the best fighting styles for a humanoid with a low center of gravity?
9
If a naga was 7' tall how long would it be?
12
Mermaid Land (and Sea?) Combat
8
Would Naga be good at throwing grenades?
5
Could Naga Reload Muskets while Marching?
3
How heavy would a Naga be?
6
What would the “tanks” of an underwater race look like?
7
What would a global highway look like?
2
What would the optimal beast of burden created by biotech look like?