How could I explain why a humanoid, intelligent creature melts when splashed with pure water? [duplicate]

This made Dorothy so very angry that she picked up the bucket of water that stood near and dashed it over the Witch, wetting her from head to foot.

Instantly the wicked woman gave a loud cry of fear, and then, as Dorothy looked at her in wonder, the Witch began to shrink and fall away.

"See what you have done!" she screamed. "In a minute I shall melt away."

"I'm very sorry, indeed," said Dorothy, who was truly frightened to see the Witch actually melting away like brown sugar before her very eyes.

"Didn't you know water would be the end of me?" asked the Witch, in a wailing, despairing voice.

"Of course not," answered Dorothy. "How should I?"

"Well, in a few minutes I shall be all melted, and you will have the castle to yourself. I have been wicked in my day, but I never thought a little girl like you would ever be able to melt me and end my wicked deeds. Look out--here I go!"

Imagine a race of humanoid, intelligent aliens who display the same characteristics as the Wicked Witch of the West, but aren't magical. How could I explain why such aliens literally "melt" when splashed with a bucket of room-temperature pure water?

The ideal answer would provide a plausible reason for pure water to cause this effect based on known chemistry and biology with minimal handwaving.

Simple: they are ammonia-based lifeforms, and to them water is a strong acid.

In the ammonia system, water, which rests with liquid NH3 to yield NH4+ ion, would seem as a strong acid, quite hostile to life. Ammono-life astronomers, eyeing our planet from their chilly observatories, would doubtless view the beautiful, rolling blue oceans of Earth as little more than "vats of hot acid." -- Table 8.3: Dissociation of the Vital Solvent

(Or not so simple: such creatures would likely have evolved in atmospheric pressure 60+ times higher than our own and would immediately explode if exposed to our thin atmosphere.)

Similar to rek's ammonia-based answer: Their bodily fluids are based on water-hydrogen peroxide eutectic. Such a creature would be optimize to live at lower temperatures than humans, but the top of the survivable range could have considerable overlap with the bottom of ours.

Hydrogen peroxide is extremely hygroscopic, and that combined with regular osmotic pressure would cause rapid absorption of water when exposed to large concentrated quantities of the liquid, resulting in the rupture of cell membranes.

They would be able to deal with exposure to water vapor in the atmosphere by expending metabolic energy to actively pump excess water out (rather like we regulate our salinity, pH, and other ion levels) and/or converting water to hydrogen peroxide. And in fact, addressing a need to extract as much water vapor as possible from the air in the absence of significant sources of abiotic liquid water would provide an incentive for such a creature to evolve. (In fact, water-hydrogen peroxide mixtures have been seriously studied as a possible solvent for native Martian life, which has implications for the sorts of experiments one would do to attempt to find such life.)

In addition, peroxide-based organisms, if they have otherwise Earth-like biology, would require a lot of protective proteins to inhibit spontaneous oxidation. Rupturing cell membranes and messing up the concentrations of those proteins may result in the hydrogen peroxide component spontaneously and violently reacting with the creatures other biomolecules, meaning that there's a good chance it wouldn't merely melt when splashed with comparatively-hot room-temperature liquid water, but also start steaming and possibly even burst into flame!

The body inhabited by the witch is not her original body. It is a synthetic body, made by magic out of sugar or salt. Or pastry!

Aside from melting like sugar, the witch has dust in her veins (sugar?) and does not bleed.

Once the Witch struck Toto a blow with her umbrella and the brave little dog flew at her and bit her leg in return. The Witch did not bleed where she was bitten, for she was so wicked that the blood in her had dried up many years before.

Synthetic bodies occur often in fantasy / scifi. Also in Wizard of Oz the Tin Man had a synthetic body. Kroenen in the Hellboy movie has some sort of semisynthetic body with dust for blood.
In Harry Potter, Voldemort does something similar with his Rudimentary Body Potion: this makes for him a synthetic body.

If the witch has made a golem-like synthetic body out of salt or sugar or pastry that would explain why she would melt.

I was wondering what a woman made of sugar would look like. I found one. 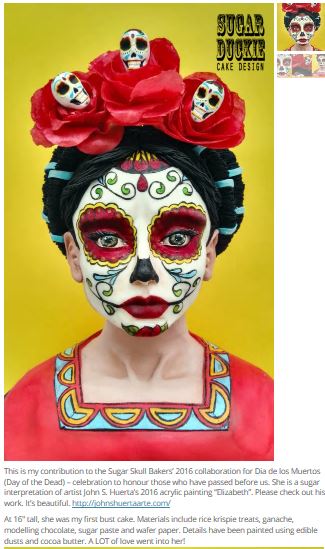 Cytolysis would give you the effect but it just not going to work with such small amounts of water especially over a short period of exposure. basically its not enough water and there is no way to get it in the body.

A person is already mostly water, and people are big so even under ideal conditions add bucket of water is not enough to cause run away cytolysis.

Worse if you creature lives on earth it has to have a way of limiting permeability otherwise they would die within a few hours no matter where they live. So there is no way they would absorb a even a significant portion of the water from splash. Just a persons sheer mass will drastically slow absorption.

Not the answer you're looking for? Browse other questions tagged science-based biology chemistry humanoid or ask your own question.

12
What would cause life forms to be water soluble (i.e. witches)?

44
How could I scientifically explain ice breath?
7
How would I design a humanoid with retractable claws?
5
How could a small human sized humanoid creature hang upside-down?
1
How could a humanoid baby glow from hunger?
6
How can I explain the functionality of a partial humanoid grown from sperm
5
How large could an aquatic humanoid get?
4
how could a creature have a vacuum chamber inside its body