Can I huff and puff and blow a pyramid down?

I am the most powerful weather wizard in the world. I can create any sort of wind based phenomenon with a snap of my fingers. I can whip up a tornado in less than a minute, and get a Category 5 hurricane going in a few hours. Though the magic I use to generate wind creates energy out of the Aether, once the wind is formed, it must obey the laws of physics.

I am interested in a demonstration of my powers, to suitably cow the assorted peoples of the world that they will pay me an exorbitant tribute. I want to blow up something big. The Great Pyramid at Giza, for example. I would like to use my powers and blow it to smithereens, like it was an Oklahoma trailer park.

The trouble is, I'm a little concerned because I don't want to start something that I can't finish. The pyramid is constructed of limestone with most blocks about 1.3 x 1.3 x 0.7 meters, with a mass of over three tons. I know I can generate enough energy to blow such a block around, but will wind force alone be able to move that block? If I get the wind going fast enough to move that block will there be other....side effects?

The upper end of tornadoes can do an amazing amount of damage, and your character can place an EF5 tornado where ever they want it. Unfortunately though the Great Pyramid of Giza is a formidable opponent. It will definitely take damage from the tornado, but it will still be standing afterwards.

It was hard to determine if wind could lift a limestone block until I found an article about a tornado from 1990:

In June of 1990, an exceptionally violent tornado formed in the desert-land of southwest Texas. Near the end of the tornado’s path in Bakersfield Valley, a production facility was destroyed (at left) and three oil tanks weighing 180,000lbs were moved three miles to the east. Two of the tanks were found 600ft up a hillside with a 40 degree incline. This is one of the most impresive instances of tornado damage ever recorded and perhaps the only documented instance of an object over 100,000 lbs being moved a long distance.

Limestone weighs 2611 kg/cu.m. Doing some basic math each limestone block would weigh roughly around 3,088 kg. Note that some of the lower blocks in the pyramid are much bigger and can weigh five times that amount. If a tornado can push something weighing over 80,000 kg uphill then a tornado being directly manipulated by a person should be able to dislodge and push limestone blocks off the pyramid.

How long to destroy the pyramid

Given enough time a tornado could turn the Great Pyramid of Giza into a pile of rubble, but the question then becomes how long will it take to do it. Unfortunately there is a time limit. Your character will likely not have more than an hour to pull this off. After an hour the tornado will want to dissipate on its own or by that point your character will have to flee from the angry locals.

It has been estimated that the pyramid has 2.3 million blocks. If your character can take off even the top half of the pyramid, and leave the bottom half in a mess, then the mission is accomplished. The top half the pyramid only makes up ~12% of the total volume of the pyramid. So in order to remove that top half your tornado will need to remove approximately 276,000 stones in one hour or 76.7 stones a second. Needless to say I doubt the amount of stone removed will come close to that rate.

Where to form the tornado

For now lets table the time problem and look at where to perform the deed. The Great Pyramid at Giza is a tourist attraction and so is surrounded by security. If you were to even attempt to form some kind of weather event there you will likely end up shot. So you will need to form your tornado in a place which will not draw too much attention and that you can get it to your intended destination. Looking at Google maps of the area around the pyramid the only vector that you have available that will not go over populated areas is come up from the south: 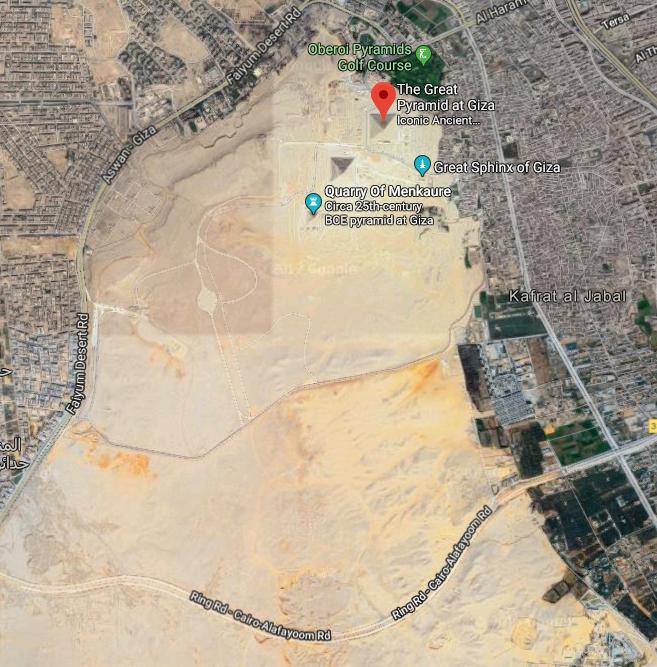 Take an off road vehicle onto the Ring Rd. - Cairo--Alafayoom Rd, go off road for a bit, and then take your time to whip up your tornado there. Once it is ready send in north, and park the tornado on the Great Pyramid. By doing this you will also likely destroy/damage the Quarry of Menkaure and the Great Sphinx of Giza.

A single normal weather phenomena will not be enough to destroy the Great Pyramid of Giza. However, if you park the tornado between it, the Quarry of Menkaure and the Great Sphinx of Giza, and make the tornado the right size even if you do not fully destroy any of them, the overall damage should get your message across.

Why try to knock it down when you can abrade it away?

You are a weather mage. You have a pile of sand nearby in the Sahara. The combination means you now possess the worlds best sandblaster!

Specifically, we are talking about the Aeolian process. Wind erosion that occurs over time. There are beautiful examples of the results all over the world, but some of the most beautiful are in Utah (I am a touch biased,I confess)

So here is what you can do: Concentrate a flow of very high speed wind across the nearby dunes and pick up a bunch of abrasive sand. Direct it in a focused stream along the edges at first. Keep cycling the wind around back to the desert to pick up more abrasives.

Depending on how tightly you can control the wind flow and concentration of sand in it, you could carve your name deeply into the stone.

If your guy has really, really, fine control, he can add the use of water streams to carve out chunks. Water Jet Cutters are used to cut steel and other substances. Start about 2/3 up on the big pyramid and cut diagonally down to let the top slide off and expose the clean cut underneath. That will get attention.

You can also tell people your wizard has an abrasive personality.

This principle is not limited to fine abrasives. As long as the wind is forceful enough to pick something up and throw it at high velocity. Tornadoes have been known to throw chunks of 2x4 through cinder block walls at more than 200 Kph. Your weather mage could use cat 5 hurricane force winds to simply pick up the bulk of Cairo and throw it at the Pyramid. Even small buildings impacting at 250 Kph are going to cause a lot of damamge. The squishy inhabitants might even put a ding, if they hit head first.

If you can focus this wind and start it from any direction, then your best bet would be to do it within the pyramid and blow it up from the inside. Enough air pressure will burst anything, if you can apply in instantaneously and there isn't a limit then you have an explosive force.

We used air pressure to test our welding and solid metal tubes were deformed and burst using it. This is just scaling that effect up. It would be impressive!

Not the answer you're looking for? Browse other questions tagged magic weather engineering or ask your own question.

9
Magically knock someone down and pin them using Science
3
Pressure needed to blow up a lung
13
How to blow up a star by accident?
1
Where would wind blow away the smoke from a giant fire?
16
How to get down Valles Marineris
7
The World's a Jungle Again. Would Doldrums Blow the Global Air?
6
Aircraft that can endure high winds and storms
11
How can a coven of witches operate as a pyramid scheme?