Does the interior surface of a Dyson Sphere exert gravity?

The interior of this particular Dyson Sphere is so large that it encapsulates a star at its center. Otherwise it is filled with breathable air which creatures can breath and fly in. I imagine that for the most part it contains a zero gravity environment, except for the areas closest to the star and to the interior surface of the sphere itself. How would I calculate these?

Edit: Thank you for all the answers and insights.

I had to look up what a Dyson sphere was, but using this definition from Wikipedia, I'm assuming it's a spherical shell. If you can assume it is a uniform spherical shell, i.e. it has constant density throughout, then the sphere will exert no gravitational force on any object inside it. This can be easily proved using Gauss' law applied to gravity

For thorough derivations, search 'gravity shell theorem'. This result was derived by Newton and can be easily obtained with only geometry, Newton's law of gravity and patience.

Things get trickier if you have a non-uniform density or do something else to break the symmetry of the problem, but that gets complicated quickly. If you need a gravitational-like force sticking people to the shell, there are much better solutions out there.

Using an equation derived from the Law of Universal Gravitation, you can calculate the force of gravity a distance $x$ away from the center of mass. The equation is here:

where $G$ is the gravitational constant, $m$ is the mass of the body, $x$ is the distance from the center of mass (for force at the surface of body, this is just the body's radius), and $g$ is the resultant acceleration due to gravity.

This equation is directly applicable to the question of the star's gravitational effects. Just based on some napkin math, I think you'll find that any point where the radiation from the star is non-lethal will also have negligible gravity from it.

However, this equation isn't very helpful for the Dyson sphere calculations. Sure, you could assume that the sphere is a point mass and do the same calculations, but a) this would be inaccurate as the sphere is hollow, and b) would imply that people on the inside of the sphere would be hanging on 'upside down', which doesn't seem right. So let's take a better look at it.

This research site has a good argument about this. Basically, it works out that for a uniform hollow sphere, all points within the sphere have an effective gravity of zero. This makes sense if you think about it: by being inside the sphere, you are automatically subjected to the net gravitational forces of all the surrounding sphere walls which must, intuitively, sum to zero. The differential equation on the link is the mathematical way of proving that intuition.

Your inhabitants would experience no gravity due to the sphere itself (while inside it, that is) no matter how massive the sphere's radius, thick the outer wall, or dense the unobtainium it is built out of.

The star, too, would exert little gravity on the inhabitants as (presumably) the inner surface of the sphere is very far away from the star in order to keep radiation at survivable levels. That said, if the radius of the sphere were to be very close to the radius of the star, then yes presumably there would be some gravity due to the star's mass, pulling towards the construction's center of gravity (the center of the star).

One thing you could look into is spinning the sphere about a central axis in order to simulate gravity, much like hypothetical space ships/stations could. The acceleration of spinning would have a tendency to "push" people away from the center, resulting in the appearance of gravity on the inner surface.

The previous answers seem to assume a hollow sphere - but this is not the case here:

it encapsulates a star at its center. Otherwise it is filled with breathable air which creatures can breath and fly in.

So what we have here is a gas (and one star) filled balloon with a (presumably metal) outer skin. Leaving aside the fact that a star in an atmosphere would probably behave WILDLY different from one in a vacuum, this means we're looking at a body that has mass everywhere in it (although at different densities), leading to an overall gravity that points to the center... which means, anything inside your dyson sphere would be drawn towards said center, and thus the star.

If you want to avoid all your nice atmosphere and creatures falling to a fiery death (although it might be a long enough fall to starve on the way, not sure there^^) until you DO end up with a hollow shell (except for the star), I'd recommend rethinking where you want to place that atmosphere. If you handwave some force fields that limit the atmosphere to (some number of kilometers/miles/whatnot), you will have a hollow (except for the star, again) shell and can go with any of the other answers here :)

Other answers address the question of gravity, so I'll just expand on the atmosphere topic.

The biggest physics issue with your proposed world is the atmosphere.

A star is formed when enough gas is present that the gravity from all of the gas is enough to collapse it down into a dense hot sphere. It would thus collapse any atmosphere around it into itself. First you may think, well maybe the star only collapses the heavy elements and the light ones could still form an atmosphere. However, most of a star is hydrogen, the lightest element. So this is not true.

The density and pressure of a gas grows exponentially towards a the source of gravity, so it is impossible to have an extremely thick atmosphere without reaching pressures where things form plasmas. The exponential growth is because each layer of gas must have a pressure that can support all of the weight above it.

Even if the star initially didn't have enough gravity by itself to suck down a giant atmosphere, even a low density atmosphere would have more mass and thus gravity than a typical star.

If you want to have a giant atmosphere, consider having it on the outside of a shell. So then you'd have a star, a large vacuum, a (possibly transparent (maybe even diamond)) inner shell, an atmosphere, and an optional outer shell.

With this arrangement your gravity in the atmosphere would be:

Where $r$ is the distance to the center of the star, $g$ is your gravitational acceleration, $G$ is the universal constant of gravitation, and the $M_{star}$, $M_{shell}$, and $M_{atm}$ are the masses of the star, inner shell, and portion of the atmosphere closer to the star than $r$ respectively.

So now let's take a look at the equations for the atmosphere to see if we can come up with some numbers that will fit your criteria:

Let's say the temperature is constant to simplify our analysis, and keep our creatures comfortable.

The change in mass of atmosphere closer than $r$ as $r$ increases will just be the surface area of the sphere of size $r$ times the density at that $r$:

Then since the pressure of the atmosphere must support the weight of the gas above it, the rate of change is also related to the density:

To simplify things a little let's change our variables:

Now we almost have enough information to do a numerical integration; we just need our initial values, and our constants. So let's try:

Integrating numerically we can get a plot of pressure vs altitude: 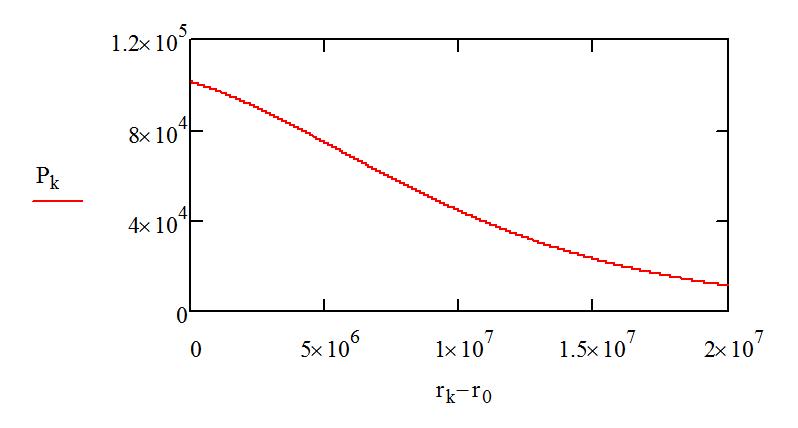 As you can see, the pressure drops off to less than three quarters of the initial pressure (enough to cause altitude sickness) by about 5000 km. Certainly a thicker breathable atmosphere than the measly 2.4 km that earth has, but let's see if we can do better.

By increasing our starting radius and decreasing the mass of our star and shell we can decrease the rate of pressure drop off, so let's look at a start with near the minimum mass to still be a red dwarf, about a tenth of our sun, and let's start out 100 times as far away: 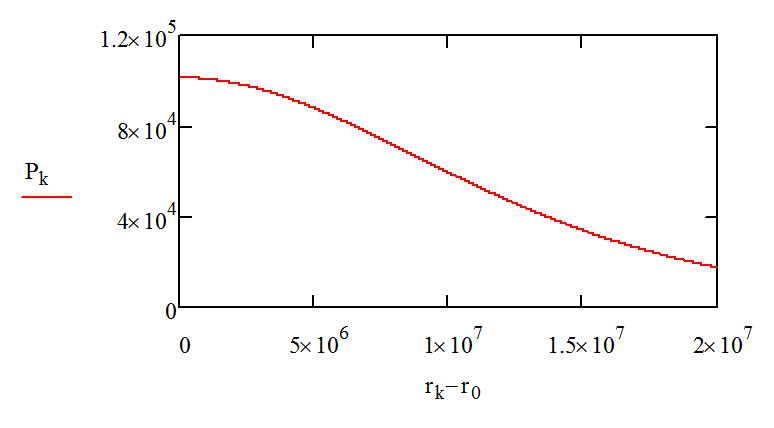 For this system it looks like the breathable atmosphere would extend out to 7000 km: not much of an improvement for the extremes it took to get there. At 100 AU out from the star, you'd probably need an outer shell to insulate and keep your atmosphere warm.

Other concerns are how you'd get an intershell with a curvature of 1 AU to withstand an atmosphere of pressure, even if it was 100 miles thick, it would need to withstand 100 GPa of stress (diamond breaks somewhere in the 70-300 GPa range) Of course 100 mile thick shell of diamond would have a mass of 160 solar masses, but of course with that much mass we'd need to support its own weight in addition to the atmosphere. Turns out we just can't do this, so maybe just hand wave it away? Weightless force field?

Not the answer you're looking for? Browse other questions tagged science-fiction gravity or ask your own question.

9
Is A Solar Dyson Sphere Habitable?

11
Redesigning the human body to flourish on a high-gravity world?
34
Dyson sphere with mirrors
3
Using capillary action to bring water up to flying cities
2
Can an inhabitable zero-G environment occur in nature?
2
Gravity and a massive gaseous sphere in space
1
Alternative to gravity inside a Dyson Sphere?
1
How would gravity and centrifugal force interact in Dyson constructs?
6
Hanging World - Trees