How do you determine placement of multiple lunar bodies in the night sky?

One of the worlds I’m building has three moons in 1:2:4 resonance, with the full moons syncing up once a cycle, meaning all three are full at different times but at the same time when the moon with the longest orbit completes a single orbit.

What I’ve been thinking about lately though is where they would appear in the sky based on their orbit and phase, especially after finding the following image: 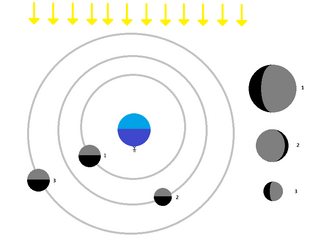 Now, as far as I’m aware, the moon appears in roughly the same place to an observer because both the moon and earth are in constant motion. However, with multiple lunar bodies, I get the feeling this movement will have a more pronounced effect on observation.

Essentially what I’m trying to figure out is where these moons would appear in relation to one another in the night sky and how much, if at all, they would appear to shift to an observer.

The 3 moons will roughly be on the same orbital plane, and once they are in the opposition to give a full moon, they will appear aligned. They will occupy the positions marked in red in the figure. 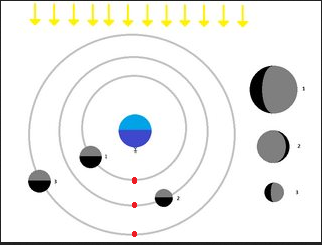 If their angular size in the sky is larger than the angular distance between them, the observer will see a fancy eclipse. If not, the sky will show a peculiar show of 3 full moons set on a straight vertical line.

5
Could my moons-planet system be stable?
2
Habitability and orbital stability of these moons?
22
Realistic sky of an Earth-like moon orbiting a gas giant (length of day and size of celestial bodies)
15
How would a moon in geostationary orbit appear to wax and wane?
10
Details needed for day cycle of lunar world orbiting a gas giant
10
What is the maximum orbital time for my moon around my planet?
2
How to get a habitable moon without too long day-night cycle?
1
Possible behaviour of one of three moons?
12
What is the largest possible appearance of a celestial body in the sky?