Magic is tied to the immune system. What happens to mages who overextend their abilities?

My magic system involves all organisms producing a sort of energy field that acts as their immune system. If someone casts "too big" a spell - draining too much of their energy and compromising their immunity - they obviously are vulnerable to all kinds of illness and disease.

My question is: what are some of the most common types of illness these unfortunate souls might have to deal with? I'm looking to identify a few different diseases (or at least sets of symptoms) that people might specifically associate with magic users bc of this effect.

This answer is based on the Wikipedia page for symptoms of HIV/AIDS. Hat-tip to @pojo-guy for the idea.

The page seems to be well-referenced, but as I’m not a virologist, I’ll leave this information for you to look at, and for someone with more expertise in the field to determine its accuracy. From the very few (read: one) discussion I’ve had with virologists on HIV, this all seems to check out.

According to the article, in the early stages of AIDS, an HIV victim may have:

While these are all symptoms caused by very common bugs, things are much worse for people in the much later stages of AIDS. Ultimately it comes down to what viruses, bacteria, fungi, and parasites are active in the region, but ultimately literally anything can infect a person whose immune system can’t stop it, leading to victims of HIV suffering from anything from GI disorders to pulmonary disorders to neurological disorders to cancers to mushrooms growing on their faces.

As an aside, the immune system works by detecting foreign substances and killing them off. This includes cancers. In all likelihood, everyone reading this post has had cancer before; the immune system just usually deals with it. The deadly cancers are the ones that can disguise themselves well enough to hide from the immune system.

Why do I bring this up? Well, if your mages’ immune system is a ball of energy acting as a shield from the outside, what happens when the mages’ own cells begin attacking them, from the inside?

A problem, from a story-telling aspect, is that a lot of opportunistic infections (those that prey especially on the immunosuppressed) seem pretty similar from the outside: fever, cough, feeling bad, maybe acting weird, maybe losing weight. Not that great for a story.

There is, however, a problem for the chronically immunosuppressed that would lend itself well to a story. 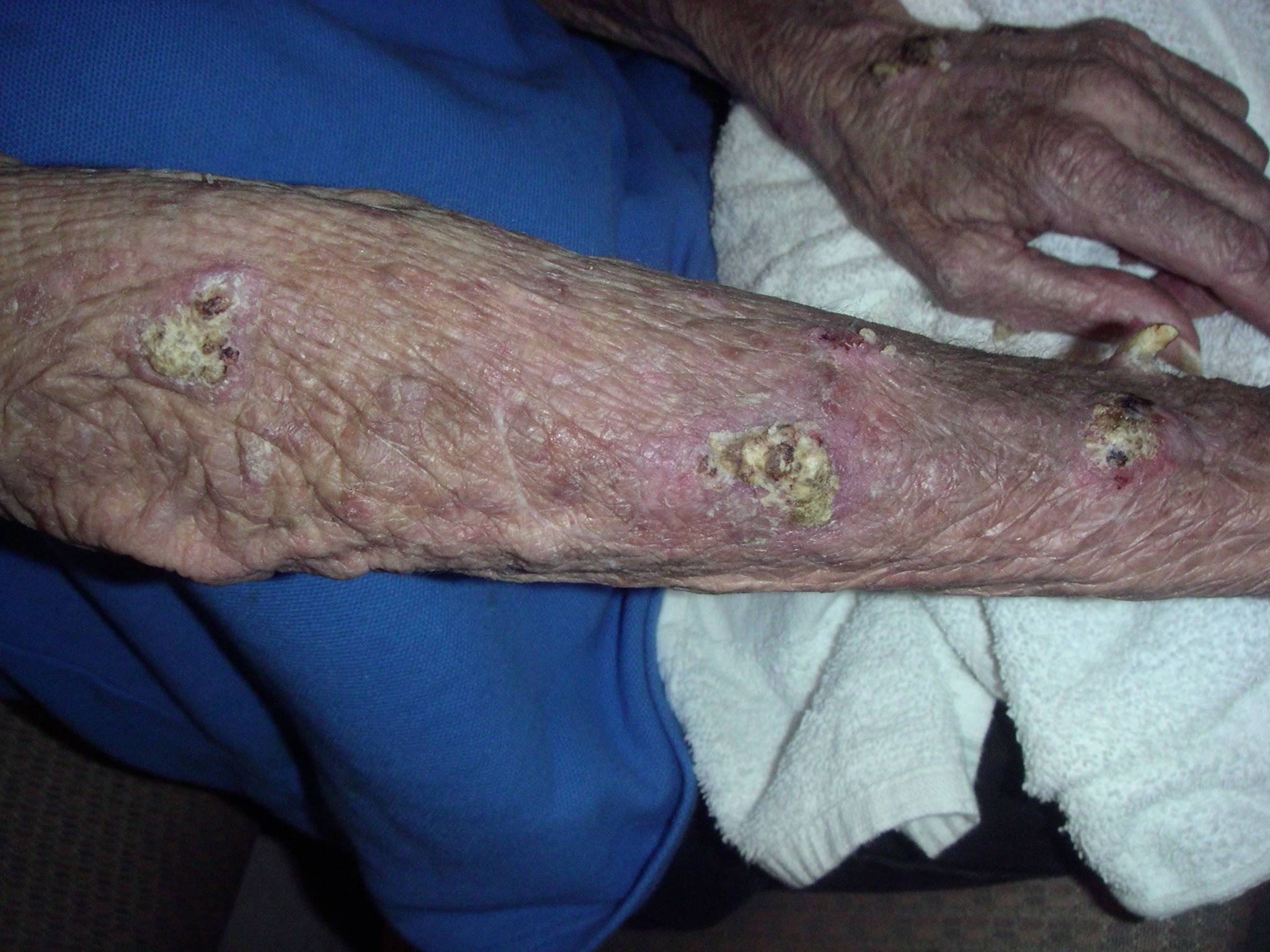 Non-melanoma skin cancers represent a major cause of morbidity after organ transplantation. Squamous cell carcinomas (SCC) are the most common cutaneous malignancies seen in this population, with a 65-100 fold greater incidence in organ transplant recipients compared to the general population

The immune system is important for holding back squamous carcinomas of the skin. When the immune system wanes, either with age or because of disease or medicine, people develop more skin cancers - sometimes hundreds of skin cancers. Some of these can be deadly but most are just disfiguring - scaly, bleeding lumps and crusts. Skin cancers can sometimes produce fingernail-like horns also; one can be seen in the image above and a google image will find more. Growing bleeding, scaly horns out of random places in the body seems like a good problem for an overextended magic user to have.

Besides skin cancers, people with this immunsuppression skin issue also develop many warts, which are cotravelers with the cancers and are also disfiguring. Warts and witches are like peanut butter and jelly. Maybe not exactly like that but you get the idea.

Both of these issues leave the afflicted person functional and sane which is good from a storytelling perspective. I like the idea of the afflicted wizard using magic to get rid of particularly troublesome spots - which of course makes the underlying problem even worse.

First up, the common cold. Yeah I know it seems obvious but it is nearly omnipresent and one of the most infectious diseases on the planet. Anytime someone's immune system gets too low you will get a cold at least.

Second, strep throat. This bacteria is part of the natural bacteria that is present on the skin. Once again, if your immune system gets too low, you will get infected with strep throat.

Third is pneumonia. This kills lots of people a year, and its primary target are people with weak immune systems. The old, the sick, and the very young are all susceptible because they lack the strength to defend against it.

These three are just the first ones that pop into my head, and anytime that you are messing with a person's immune system you can have allergic responses and even sunburn-like symptoms. Past that you can get into auto-immune disorders, and if the immune system breaks down or shuts down, any infection will quickly become serious if not lethal.

Don't forget that aside from the diseases that have been already listed, you could also make old, since long disappeared diseases make a comeback due to a widespread weakening in people's immune system, much like how the fact that people refuse vaccines nowadays causes the resurgence of old diseases. Some that come in mind are various strains of the pest, spanish flu, cholera, etc.

The question then would be which of those pathological organisms would be strongest in terms of magical immunology, because they would be the ones to benefit greatest from the weakening of the magic users energy field and, therefore, most likely to triumph.

Excluding prions, which would not normally be considered as organisms, our pathogenic organisms are:

Individually, those with the greatest magical immunology would be expected to be most effective in causing disease, although it is unclear whether weight of numbers might be a factor, it depends how scalable magical immunology might be. It also depends upon likelihood of initial infection - it may be easier to catch a virus than a tapeworm or flea in clean environments.

If we just consider size as being the critical factor in magical immunological defence, then large parasites and the diseases they introduce obviously have the advantage. All being equal in terms of likelihood of the pathogen being encountered, these diseases will predominate.

I've made quite a few assumptions here, but I've tried to develop some kind of rationale for how the magic immunity will work.

8
What is a good way to place fine bold lines between magic types?
9
Space wizards city : Is it sustainable?
3
How to boost the immune system?
40
What kind of spells would magicians cast in combat if the fuel to magic is very expensive
7
Double checking my world's magic rules for balance
16
How to realistically implement magic-users in medieval warfare?
0
Protections when working with a dangerous supermaterial
9
How to boost the human immune system, realistically?