It might depend on if your natives are human and just live there over several generations, or if they took a different evolutionary track.

On earth, being able to pick out camouflaged creatures is actually EASIER if you are colorblind. This is the reason why South American primates tend to be colorblind.

It might not just be about lighting either. It might be about environment. Here on earth green environments are the norm, so we adjusted for that.

But on your blue sun planet, it might be a different story: 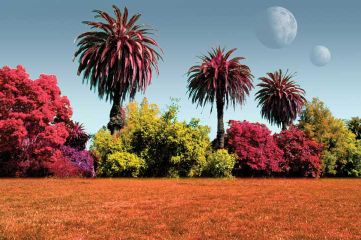 Because of this, natives from the yellow sun system may have different advantages than blue when they switch worlds. It might be possible that one or the other may be considered to be "colorblind" on the other planet, and this may confer advantages and disadvantages respectively.

For example, you and I are taught that a particular shade is "red." We may, in fact see slightly different shades, but since we both know THAT shade as red, we both call it the same thing.

When it comes to red-green color blindness, it's more marked. For hunters tracking prey, not being able to see the difference actually makes those who are colorblind in that way better at picking out animals. This may be why, if men were the main hunters and women the main gatherers, more men experience colorblindness of this kind, and more women can see differences in shades (because this was more important when it came to judging ripeness when gathering).

Those on the blue planet might even see differences in color that the yellow planet folks can't and vice versa--so natives of either may consider most of the population of the other planet colorblind. Because there is a lot more to the spectrum than we can see, and there are even animals on this planet that do not see what we can, but can see colors we cannot readily perceive.

If you have ever had to fight with lighting in a video studio, you will know the frustration that ensues because your eye is self adjusting for white balance. When you look at he scene in real life, whites are white. Look at it on the video monitor, and everything is red because of the tungsten lights.

After an adjustment period (a few minutes to a few hours) your visitors would perceive colors exactly the same as a native.

If the humans have the same structure in their eyes, which can be assumed by the fact that they are genetically compatible, the color of the sun should have no effect on their perception of the world.

There might be cultural differences based on what colors are significant important on either world. But that affect is more a function of culture/language than it is a function of the star itself.

Not the answer you're looking for? Browse other questions tagged science-based genetics sunlight colors or ask your own question.

15
What would this nebula look like from a planet?
9
Little Green EARTH Men?
3
Effect of sunset-like sky colors on human psychology
4
Would living on around Alpha Centauri change how our eyes see color?
5
How much can I expand human color perception by adding new photoreceptors?
10
What would seasons and daylight be like if the Earth was on an eight-shaped orbit between two stars?
10
A Habitable Zone Within a Habitable Zone--Would that Make any Difference?
0
Would Sean Raymond's “Ultimate Solar System” Work in This Particular System?