Where would a body last the longest?

In terms of real world science, if a necromancer was looking to raise long dead corpses for a magical horde, what region or climate or type of area would they be most likely to find bodies that were still most intact?

How long after a battle or mass death would the bodies be usable for warriors in various places? 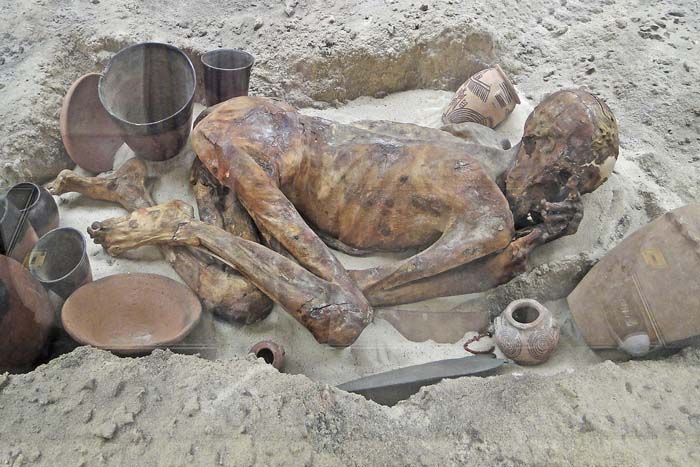 A pre-dynastic grave in Egpyt of the Badarian period. This body (which was not purposefully mummified) is between 6400 and 6000 years old.

You could find bodies 5000 years old or more with flesh still attached (if your necromancer is more into zombies than skeletons).

Leave out any time period and region that has head hunting or liked building pyramids of heads, even fresh corpses would be unusable.

Your best time would be Napoleonic era or similar with huge amounts of men dead with less disabling wounds. Earlier times perhaps those despatched by horse archers or similar.

Best of all would be one of the numerous armies that perished through dehydration, starvation, plague or all of the above.

Really you're looking for scenarios where the bodies aren't badly damaged. So an army that left a large amount of plague deaths would be ideal. And realitively fresh corpses either in terms of time or environment.

Serendipitously I believe several armies lost a lot of men to starvation, freezing or disease in history while passing over mountains which would make the corpses last longer both because of the cold and because they'd be harder for predators/scavengers to get at.

9
With current technology, genetically modified virus able to end mankind
9
How Would An Advanced Race Capable of Colonization Classify Planets
13
A weapon(preferably hard scifi) that will limit velocity of space ships in a wide region temporarily
2
Is this a plausible way for an alien organism to unwittingly cause a mass apocalypse on Earth?
4
What is the longest amount of time that salted bombs can deny human habitation?
5
Are dead tissues easier to preserve for extended period of time compared to living organisms?
0
Core= equals soul= after life is biologically possible
4
Using dead bodies for material 5: civilian armors