What subatomic particle is best for a particle accelerator gun?

Theoretically, assuming it was possible and practical to take a particle accelerator and turn it into a gun/cannon weapon, and use it to shoot accelerated subatomic particles. What sort of subatomic projectile would cause the most damage?

Assuming for a moment that the technology in question is powerful enough to break the strong and weak nuclear force (and not just turn the weapon into a straight up bomb), what would make the biggest bang for your buck. protons, neutrons or some other particle? As in, what would affect the atoms of your target and create the greatest detonation?

Another point of my question isn't what subatomic particle is the best bullet, but rather what subatomic particle when shot at a target can better destabilise the targets atomical structure, kind of like the "Little doctor weapon from the movie and book Ender's game" that shoots a sort of energy beam at a planets ring system and disintegrates it on a molecular level.

And finally, how would it work (from a theoretical standpoint, what would it do).

The ever useful Atomic Rockets has a section on Space Warfare "conventional weapons" which has most of the details you need to understand particle beam weapons (and almost every other type of weapon).

Particle beam accelerators use the property of ionized particles to manipulate the particles, both to accelerate them, focus the beam and direct the beam. So long as the beam stays inside the accelerator, all is good, but open the port and let the beam escape, and the mutual repulsion of the particles will cause the beam to rapidly dissipate, as high energy electrons, protons or ions rapidly fly away from each other.

During the 1980's, as part of the Strategic Defence Initiative (SDI), two ideas surfaced which might allow the use of particle beams in space and in the atmosphere.

Now there is one way to utilize a particle beam to make an effective weapon capable of being used both in the atmosphere and in space. Use a very high power electron beam to drive a Free Electron Laser (FEL). By varying the power output of the beam as it passes through the "wiggler" magnets, you can vary the wavelength of the laser beam which emerges from the optical train, going for very short wavelengths utilizing small mirrors or diffraction gratings for space, and stepping down to infrared or other frequencies which fire through "windows" where your atmosphere is transparent to the wavelengths for surface combat on a planet.

Anti-particles would get you the most bang, so to speak. They'd also react with the air. So, you could come up with some sort of containment to make them last longer, like a pulse of anti-electrons surrounded by a large number of protons, or just have an anti-matter flame thrower that spews them continuously. But you'd need a good shield since you'd be closer to the weapon than the target would be, and it wouldn't go very far.

The best travel, the best mass, and if the target is made of the right material you could trigger a fission or fusion reaction. But most things are not affected by neutrons and they would pass right through.

Instant plasma! Protons have more mass, and may follow a straighter path, but both will immediately interact with particles nearby. If you had a lot of them flowing in the same direction you'd ionize a path, creating a beam of plasma. Crazy high energy needed, and it might form a fractal pattern more than a straight line.

You might have some sort of laser that guides the plasma or pre-ionized the path of the particles to reduce the spread and energy loss, but it's pretty far from understood physics and would require a bunch of handwaving about the mechanics.

Using ionized helium nuclei would have more mass and a straighter path, and could have instant negative effects on DNA, similar to alpha radiation from plutonium. Alpha radiation is stopped by a sheet of paper or other similar minimal barrier, but if you had enough of it going fast enough, you could cut a path. This would probably be like a death ray, creating an ionized beam that is particularly destructive to organic material. Still very short ranged and very ionizing, but a reasonable fuel source would be a canister of helium gas.

A particle beam weapon would be good for shooting something where you did not want to burn a hole in it, but rather wanted to deliver energy to something inside - perhaps a lifeform, or some element of a spaceship. The precision (in 3 dimensions) would minimize damage to the rest of the target which might be desirable for various reasons. It might be less likely to blow up. Or you could salvage it. Or you could disable a ship without punching a hole in the side and killing the crew.

As background consider what real particle beams are used for. Conventional radiotherapy uses photons which is electromagnetic radiation. Particle radiation has the benefit that a moving charged particle unloads its energy mostly at the point where it slows down. 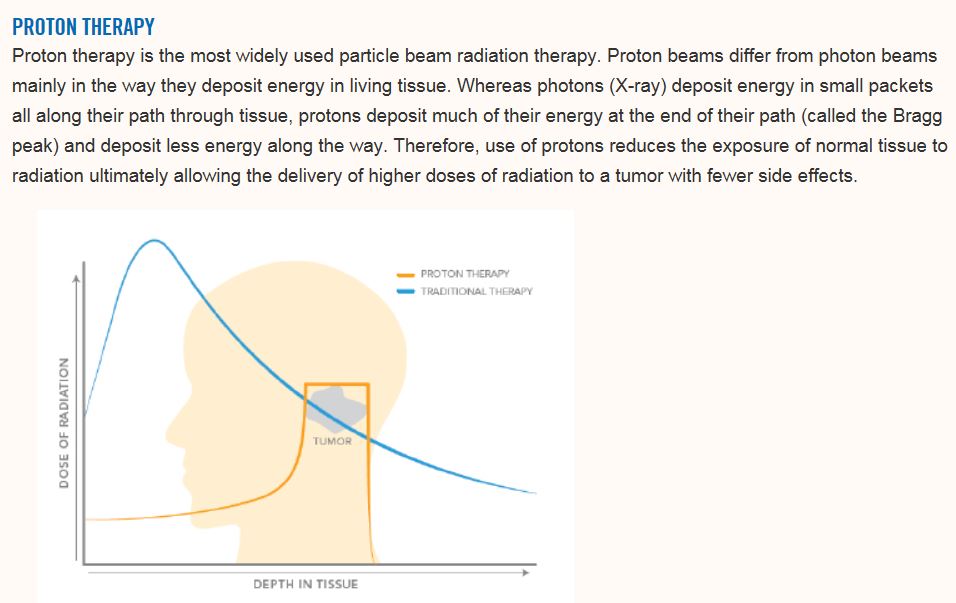 So a particle beam is good for depositing energy at a specified distance into an object, and that energy deposit site (here a tumor) can be governed by adjusting the amount of energy put on a proton.

Other ions are used for particle beam radiation. One hears about carbon ion radiation and I see that other particles (neon, krypton) have been tried.

from The Emerging Role of Carbon-Ion Radiotherapy

While conventional radiation generally passes continually through a biological target, with dose delivered roughly equivalently throughout the beam path, particle beams release energy at the inverse of their velocity. Particle beams thus deliver a lower entry dose, depositing the majority of their energy at the flight path terminus, yielding an asymptotic dose peak (the “Bragg Peak”) (15). This allows for a dose concentration distribution impossible with conventional irradiation methods.

Today, proton dominates particle therapy. However, the larger mass of carbon results in decreased beam scattering, yielding a sharper dose distribution border with minimal penumbra (16). Radiobiologically, carbon-ion beams result in two to three times the relative biological effect (RBE; the biological effectiveness of one type of ionized radiation relative to another, given the same amount of absorbed energy) of proton and conventional irradiation methods

So the more massive the particle, the more kinetic energy and the more precise the beam? Apparently not.

https://www.bnl.gov/nsrl/userguide/bragg-curves-and-peaks.php is an excellent reference on Bragg curves, which depict energy deposition at given depths for a charged particle with a given energy. 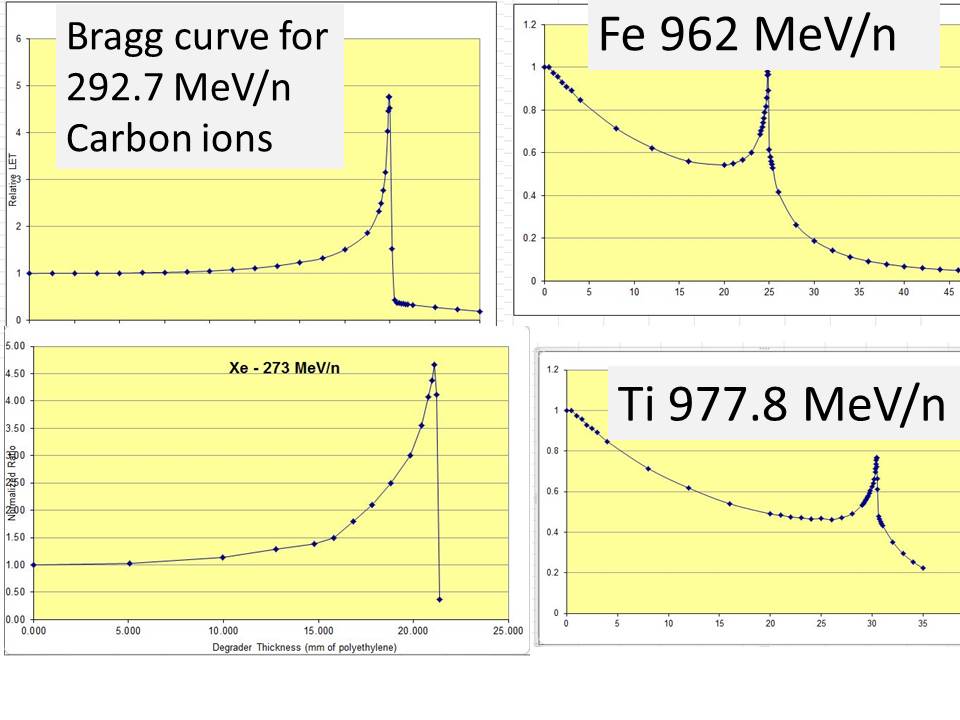 When the primary ion of high-Z breaks up, it results in several low-Z fragments, each of which deposits small amounts of energy in the material. The sum total of all the energy deposited by all fragments can never add up to the energy deposited by the primary ion. This causes the Bragg Curve for fragmenting high-Z ions like Iron to drop initially.

So heavy ions like titanium and iron and gold which fragment do not cleanly bring their energy to a given depth and drop it off - they fragment and deposit energy along the way sort of like electromagnetic radiation. Sloppy.

Carbon must not fragment like that and neither do xenon or krypton. I presume xenon and krypton do not because they are noble gases but why that should be true (or what governs the tendency to fragment in a given ion) is beyond my ken.

So: more massive = more punch, and noble gases are less fragment prone and more likely to deliver the energy at the depth you want. Radon is the heaviest noble gas and so that is my answer.

Addition in case you want to use this in an atmosphere and the air is in the way. 1: Shoot a dart with a conductive wire. 2: Turn the wire into plasma with a huge electrical charge. It will in essence be a horizontal lightning bolt. 3: The expanding plasma will leave a low density core of near vacuum. It will be where the wire was. 4: Discharge your particles down this transient vacuum path.

Not the answer you're looking for? Browse other questions tagged weapons nuclear-weapons kinetic-weapons .

20
The Nuclear Dragon
7
Why would non-kinetic weapons be used for orbital bombardment?
3
Particle Weapons - Sight and Sound

12
Space weaponry?
4
energy based super weapons in space, realistically possible?
4
How to clean-cut my space-borne enemies?
3
Preventing the dispersion of a particle-beam behind the target
0
Controllability of this linear particle accelerator
1
Suspicious helicopter-borne relief packages
15
How do you make a gun that shoots melee weapons and/or swords?
7
Emitting a particle beam within the atmosphere
4
What wavelength of electromagnetic energy is best suited for burning into a tank's hull?