On my quest to make pretty much every single fantasy creature biologically feasible I have come across a hiccup. It wasn't angels, no you people helped me with that. Demons are easy, we have plenty of ways to fireproof a human. No it was something much less common, something people may know, of but don't know the name of. The Dullahan, also known as, The Headless Horseman.

Originating in Irish mythology, which is a field day on its own I'll tell you that, most of his supernatural features are pretty simple to explain. for example:

However this does not lend itself heavily to the fantasy depictions seen today.

uses a human spine as a whip

Now that is the easiest part to explain, human spines are not that hard to come across if you look hard enough.

There are plenty of funeral care stores around the country, so this is easy enough.

All of these features are cosmetic however. It is all "things made of dead people" that is simple. But if we get down to the meat and potatoes of a Dullahan. If we look deeply there are only two to three elements that bare any weight. The head, the body and the horse. And we can do without the horse.

Say there was a race of these Dullahans. Say they are no longer grosser Grim Reapers, but instead just a person or other biological sentient being that could live with a head that at least seemed to be able to detach. A Dullahan could be seen and reported to have their head detach and be held in their bodies hands.

Now some mythology has the Dullahan have no head at all. That is simple: move the brain and sensory organs to the body and Bob's your uncle. But I am looking for something challenging here. there are two depictions of the Dulahan, one where they have control of both the head and body and the second is a depiction in which the head has control of the body while attached but once removed the body has a mind of its own. Most commonly seen as less intelligent than the head, these bodies are always seen responding to orders yelled at the body to put the head back on top, with the success of these orders being dubious at best.

My question is, how would this be possible? How could a creature be capable of living and at least having basic problem solving and motor skills without a head. The furthest I could get harkens back to the masterpiece of a film, Pacific Rim, in which the theory is proposed that large creatures such as Dinosaurs and the Kaiju required a second brain to handle motor control in such an unwieldy body. This is as far as I have gotten so maybe the smart people over at Stack Exchange can give us a little help.

You see, there is not one race of Dullahan. There are two. They are symbiotes.

One species is nearly humanoid, minus the head. The other species looks like a humanoid head.

Now for the details. The head controls the body in two ways: hormones and neural signals, just like our brains communicate with our bodies. The interface is the kind that you saw in James Cameron's Avatar: 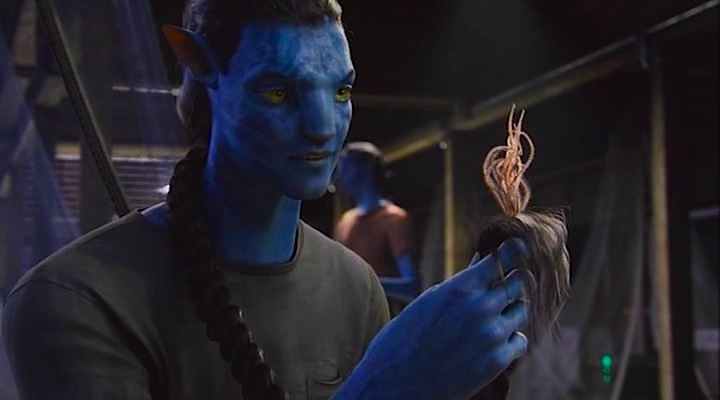 The head has a hole in its lower portion which is actually its cloaca. A sac close to the ends of the gonads and bowels contains a modified umbilical cord which is able to connect to an interface in the body.

Similarly, the body has a special kind of tissue at the beggining of the esophagus: it contains exposed nervous tissue and is highly vascularized, so as to connect to the neural tentacle of the head, and also to send and receive hormones.

The body's ancerstor species was a hominid that happened to have a perfect spot for the proboscis to connect in the nape. The parasite was better at spotting feeding grounds and detecting predators, though, so the relationship evolved from parasitism to mutualism.

Without the need for sharp senses nor advanced processing, the body species's head shrunk over generations. Currently the bulk of the brain is between the throat and the chest. As for the head species - without the need for limbs, and getting processed nutrients from the body, it took a more head-like shape. Most non-sensorial organs became vestigial. It still has lungs and a heart, though. In time the head started moving to the position where the original head of the body would be, to facilitate its symbiont's gait.

When heads mate, they lay eggs inside a body's stomach. The larvae attach to the bowels, where they get nutrition from. After larval stage, heads go into an infant stage in which they have limbs that allow them to move towards and climb to a body to which they will associate. They exit the body through its rear end (yes, just like you imagined).

As for feeding: the head does the chewing, and then... well... excretes the chewed food into the body's esophagus. The body processesses it, and the head gets some nutrients through the proboscis.

This arrangement allows both species to be separated for a while, but they still need to be together and connected in order to properly eat and move around.

How about that it just very much looks like the head is removable?

The species used to have a large predator, something like a Rok, that always went for the head. Over time they evolved a behaviour to always hold a hand above their head to ward off this predator. It just turned out that being able to distract the Rok was the most viable survival strategy, coupled with a head that is sinking into the chest with every generation. So now you have a race with a very large right hand (think fiddler crab). Said hand just happens to look like the head of their ancestors (think Hawk Moth caterpillar) and with their brain and eyes safely hidden in the chest cavity.

If you came across one of these, especially one on a horse, you wouldn't notice how his head doesn't look right until you met him in the bar and he pours a beer into his chesthair.

The Dullahan is just a variation on the super-slug trope...

As the dullahan is derived from Irish mythology, I like the idea of representing biological feasibility through something like plants, or other flora, because when I think of some of the other mythologies from that region, it seems steeped in the wetlands.

Perhaps a dullahan would be a corpse controlled by a more sentient flora that have taken the corpse up as a host. The parasitic organism could establish a network through the corpse, and have the capacity to operate independently when severed, and additionally have the capacity to re-graft itself to the core of its network (the body). This would enable the Dullahan to optionally use the host's head to access its memories, its ability to speak, and see.

In this fashion (going off of the Wikipedia description at this point), the Dullahan's "hideous grin" and "moldy cheese" flesh consistency could be decomposition by the parasitic flora, along with muscular contractions as a byproduct of the parasite's adaptation to the host's nerve structure. It's sentience of death could be based off of the parasite's capacity to breach other existing plant networks (fungal mycelium networks spread through the countryside, grass, trees, etc.) and learn of its surroundings. This would allow the Dullahan to operate without sight, enabling it to stalk during the night, and its awareness of movement in its surroundings would make it easy to stay hidden.

The Dullahan's purpose for seeking out death could be based on its need to feed after having devoured nutrients from its host. The accoutrements could be made from the remnants of it's food, and the wagon could serve as a means of storing and carting around more food. The wagon's creation could be an anomaly based on the memories of the host. The horse could also be an ancillary host.

As for getting through locks and gates, perhaps the parasitic flora has the capacity to operate at a hive-like capacity, similar to ants. It could conceivably send out worker spores in advance to enter keyholes and open doors.

If the parasitic organism was fungal, it would make sense that they would shy away from metals. Copper (toxic to fungus) and its close-ish resemblance to gold could explain how even a single gold pin could drive a Dullahan away.

And all it would take to create a new Dullahan would be for a suitable host to die in a forest or bog, and become infected with a queen spore. Perhaps those queen spores are a rare and fragile thing, perhaps for the best.

What about making them 4D beings? Their body and head are attached, but it doesn't always seem that way from our 3D perspective. You could have some fun with the whole 'outside of time' and linking that to the funeral/death aspect of the Dullahan.

A dullahan could be something similar to a humanoid Disturbance but with the sensory organs being inside the prosoma, with the detachable head being just a regular human head

Not the answer you're looking for? Browse other questions tagged biology creature-design xenobiology fantasy-races proto-human .