How Would We Reverse the Spin of the Earth?

I've seen multiple posts on destroying the Earth, but is it possible for humans to reverse the spin of Earth?

In order words, considering modern technology at our disposal, is it possible for human beings to band together to reverse the spin of Earth?

In addition, considering how much energy is required to do so, what if reversing the spin of Earth became the most important thing in our daily lives? A.k.a. all the money, all the governments working together.

I would greatly appreciate any feedback on how to improve this question, or how to answer. Thanks in advance!

Nope. Not a chance.

This XKCD what-if talks about getting rid of leap seconds by speeding up the Earth and shortening each day by about 0.8 milliseconds.

We can see from this numbers that altering the Earth's spin is simply ridiculously infeasible, especially if you add the condition that it should still be more-or-less intact afterwards.

Following up on Radovan, the $2.1\times10^{29}$ J of rotational energy the Earth has is about 5 times greater than the $4\times10^{28}$ J of kinetic energy that the Moon has relative to the Earth. So even if you hit the Earth with Moon going at its orbital speed relative to the Earth (3.7 km/h), you still wouldn't be able to even stop the Earth's rotation, much less start it going the other way.

The surface of the planet could be flipped 180 degrees relative to the core making the apparent direction of rotation reversed.

Using exceedingly large superconducting coils (mega structure large) on the surface (or in the upper layers of the mantle) to interact with the core to shift the surface of the planet relative to the core, this would take an insane amount of energy, like boil the oceans and kill all life from waste heat, levels of energy, but it would be less than trying to change the rotational energy of the entire planet.

The core moves ~0.3-0.5 degrees per year faster than the surface layers so similar speed adjustments shouldn't wrench the planet apart, meaning it could possibly be done in as little as 500 years (180 degrees / 0.4 degres/year = 450 years), but would likely take much longer. For an upper estimate normal continental drift is around 2 cm per year, so continental drift could do it in only ~1 billion years.

Other problems, expect the Earth's magnetosphere to be very unhappy. Also solidly joining the coils to the ground while exerting such large forces would be very difficult to say the least.

Maybe... but not quickly, and not with current technology

Other answers have discussed the obvious approach, directly changing the rotation rate. Clearly this would require immense amounts of energy and cause catastrophic damage. What about a different approach?

As we know, the Earth's obliquity, or Axial Tilt is around 23.5° and causes the seasons. What if we, somehow, increased the Axial Tilt until the Earth turned "upside down"? From the perspective of a point above the Sun's North Pole, this would give the appearance that Earth's direction of rotation had reversed. As with any changes of this magnitude, we would want to proceed slowly, probably over the course of millennia. I don't have the necessary physics background to even begin estimating the energy requirements, but they should be at least an order of magnitude smaller than trying to directly reverse the direction of rotation.

At first, I thought the direction in which we tilt the axis would have a large effect (centuries of Summer without a sunset for most of the northern hemisphere - with an equally long, sunless Winter for the southern hemisphere - when the Axial Tilt reached 90°). However, this would only be true if the axis of rotation were to somehow remain pointed directly at the Sun. Instead, I think there would be a long period of slowly-intensifying extremes of Winter and Summer, with the Summer Sun reaching higher in the sky with each passing year, until we reached a peak where the Sun would briefly be directly above the North Pole before resuming is annual spiral back down below the horizon.

One possibility would be an enormous thruster (or a smaller set) mounted at each pole. The thruster units, or sets, would be pointed in opposite directions and mounted on turntables so the thrust would operate in a consistent direction with respect to the Sun's axis of rotation or some other suitable point of reference. Yes, there is a very good chance this will not work; it may simply slide the Earth's crust across the core, which could have devastating consequences if the core's axis diverges much from the crust's... but... I say it's worth a try!

May be make the moon crash on earth . That is trajectory pushing earth on edge . So it starts spinning in opposite direction .

So how to make moon collide on to earth ?

May be multiple nuclear attack on moon . 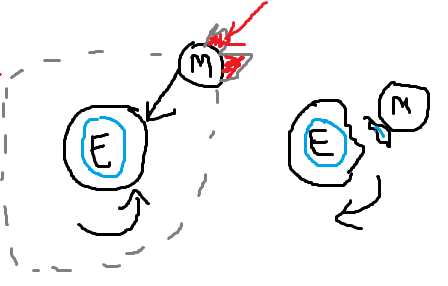 Not the answer you're looking for? Browse other questions tagged earth modern-age .