Below is a diagram showing transverse cross sections of skulls representative of the two subspecies (A and B) of the Trilateral* species. Is it plausible that such obvious differences – noting the rest of their morphology and physiology is essentially identical – could be found within the same species? 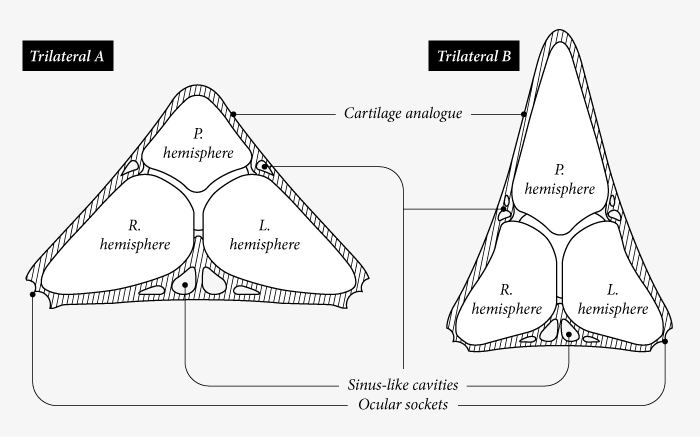 Trilaterals are quadrupedal sophonts a little smaller than chimpanzees, and have triple hemispheric (left, right, and posterior, as shown) brains consistent with a body plan evolved from radially symmetrical ancestors. Their 'head' sits atop a narrower, flexible thorax without a discernable neck; a hip-like structure at the base of the trunk supports four legs and two arms.

Trilateral A is the dominant subspecies; B evolved in parallel in geographic isolation. They are capable of interbreeding and producing fertile offspring. There is no statistically significant difference in skull volume or intelligence among mature samples from either population.

Creatures of the same species can be pretty widely divergent. An extreme example comes from domestication: 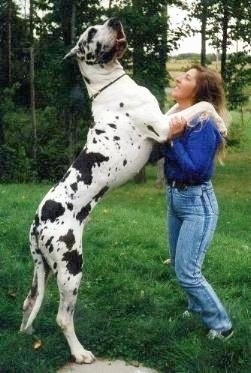 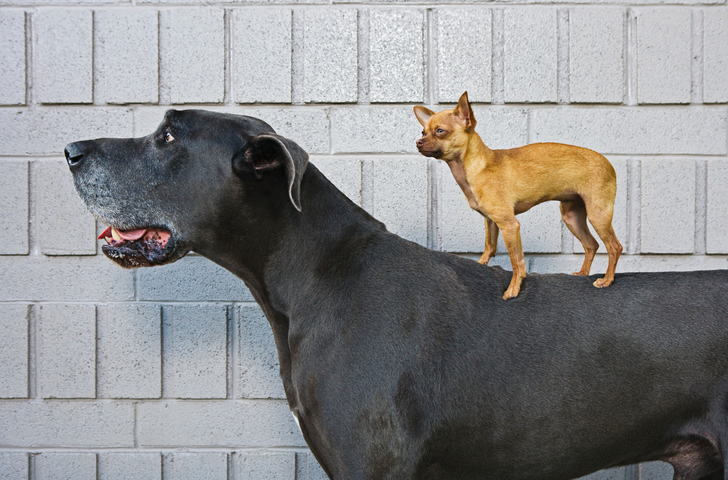 Yep, those are all the same species. So I think your minor alterations in skull structures will be just fine.

To address the issue of brain casings, dogs and wolves have various significant differences in brain structure (reference: Shoenenbeck and Ostrander, 2013) Specifically, the limbic system of the wolf is decreased by 30% or more in domesticated dogs. Since this system is associated with 'fight or flight' responses, this may account for the 'how' a wild competitor with humans was able to be domesticated.

Additionally, the recent domestication of silver foxes has been shown to have significant neurological and endocrine effects (reference: Trut et al, 2009), such as reduced cortisol levels by a factor of two in the domesticated animal.

Finally, from the same Trut paper, the expressed genetics of the hypothalamus in wolves and dogs are more divergent after a few tens of thousands of years of separation than are the brains of wolves and coyotes (Canis latrans) which diverged some two million years ago. So there is evidence that genetic differences in brain structures within a single species (considering dogs and wolves to be single species) can be more variable than differences between two species within the same genus.

Essentially the question is whether the desired morphological changes in the skull could occur before other unrelated changes would accrue that made interbreeding impossible and resulted in speciation. The simple answer is that since genetic drift produces random changes in finite populations there’s no guarantee that some barrier to interbreeding will ever necessarily arise and thus extreme divergences are possible. That said, it might be useful to discuss the factors that will affect the rate of change.

First and foremost the most potent force for evolutionary change is selection. If the two populations have different environments that impose different selection pressures then they will rapidly diverge. An extreme case of this is the domesticated dog which has been intentionally bred into many morphologically distinct breeds at a breakneck pace which would not be found in nature. If the Trilateral B subspecies was subjected to an environment where enlarged posterior lobes were advantageous then the desired changes could occur rapidly on an evolutionary time scale. Perhaps the posterior lobe is involved in olfaction which is more important in the B’s environment. Perhaps B females began to favor males with elongated posterior skulls. Perhaps B’s spend more time in water and the elongated skull proves more hydrodynamic. If you are able to work in a selection pressure (no matter how small) to drive your desired change than there is no reason the subspecies can not differ in this way.

If you want the skull shape change to be unadaptive and therefore random and purely a result of genetic drift things become more questionable. While the main factor regulating the speed of genetic drift will be population size both the desired skull morphology changes and the undesired reproductive barrier changes will be affected equally. A small, isolated population would diverge more rapidly in both areas. Ultimately, which change would be more likely to happen first is a subjective evaluation of which is the “larger” change. By larger here I’m referring to some measure of the number of mutational steps that need to accumulate to produce the change. In my opinion the proposed skull morphology changes are not large enough that they could not occur due to genetic drift before an interbreeding barrier arose.

The interesting thing is I wrote about something similar to this on biology stack Exchange about ring species Basically, they are species that are able to interbreed with closely related populations, but there are least two "end" populations in the series. If the trilaterals are a ring species, they can form into two different subspecies that can coexist and live in the same general area, while still being their own distinct subspecies. Like the real-life ring species I mentioned in the link, they may have the ability to interbreed but rarely do for whatever reason. There can still be some geographical isolation, but the isolation could be something either subspecies can overcome, but each one prefers to remain in its own environment and breed among its own kind.

Yes this is plausible
There is tremendous variety in nature even within species. Think of the sexual dimorphism in elephant seals and the massive changes that some insects undergo during metamorphosis into butterflies.

Isolated groups of the same species would eventually become different species especially if there were strong evolutionary pressures, but this would probably take a great deal of time. In the meantime your Trilateral A could morph into Trilateral B.

Although it is entirely plausible, it is not always the case. It is also possible for animals to be fairly similar but not be able to interbreed to produce viable offspring such as donkeys and dwarf horses.

Not the answer you're looking for? Browse other questions tagged science-based evolution xenobiology species or ask your own question.