Exclamations in a nonreligious culture

Suppose elves were the first humanoid species to appear on a planet and the species evolved naturally over time. They developed magic, sapience, agriculture, and the general concept of a stable society and culture. At some point prior to these elves establishing any semblance of religion or constructing deities, an alien ship crash lands on the planet. These aliens are ill-adapted to the planet's gravity, but have the means to communicate with the native elves. Between the magic of the elves and the advanced science of the aliens, the two species manage to both alter the DNA of the aliens to make their physical bodies more suitable to the planet's surface (for those aliens who choose to stay) and accelerate the evolution of various other species to produce humanoid lifeforms of typical Dungeons and Dragons lore (humans, dwarves, gnomes, etc.) to build a workforce capable of manufacturing the technology to send the aliens back to space (for those who wish to leave).

The question: Within such a setting, where no divine powers have been experienced or developed and the world's wonders can be explained with either the magical might of a naturally-occurring species or the advanced knowledge of an alien species, what curses or exclamations of pain/anger/annoyance might develop in language?

At least in Western culture, many of these exclamations seem to have religious roots (e.g., "Holy cow!", "Oh my God!", "God help us!").

Answers should indicate exclamations that may be common as well as how they developed as language evolved. Feel free to use exclamations from languages/cultures of modern/ancient Earth, but please justify them as a valid answer. As always, if you have questions, ask away and I will do my best to provide additional detail.

Conclusion: There have been several fantastic responses to this question. I thank everyone who contributed and I wish I could accept more than one as helpful. To anyone reading this for the first time, please read beyond the accepted answer, as every answer has some merit.

Actually we have multiple forms on Earth as is....French vs English is an easy comparison.

In French, most swearing directly comes from references to church. Tabernac is a French Canadian one that finds its roots in the Tabernacle section of a church. References towards the host, chalice, baptism, sacrament...all fit into French swearing (I should say Canadian French swearing).

English on the other hand…damn and holy tend to work as 'lesser' swears. If you want to get to the heart of English cursing, you get to body parts and body functions. If it spews from you or is a body part that's normally hidden away by clothing, we readily use it as a curse word. To top it off...Sex (one of those things normally kept behind closed doors/clothing) seems to be the source of our fave curse word.

I believe much of its roots is built in shame. English descendants tend to have the shame of their bodies (hide it, cover it up) more-so than other cultures. In French Quebec, their shame is shown within church. But this is speculative of me, though I've had a few people speculate this with me over beers.

So my suggestion for the source of this races curse words is ultimately what are they ashamed? Do they hide their genitalia and sing 'shame shame double shame now I know your boyfriends name!' at each other? If so, the sex and body part nature of cursing might shine through. Do they have certain not so loved ancestors who's names could be screamed in association to pain? Is their a particular task that the lowest of the species is relegated to preform? Do they have a class setup where referring to others as the lowest class possible would be considered insulting? Is there a particular visual trait (big tooth!) that is unappealing? The sources for cursing can be relatively endless really...if they came from a former class system but have lost that class system setup, the reference to the lowest class may still persist as a curse.

Don't need to conjecture. Just look at languages where swearing/exclamations are not primarily religious. In Malay, almost all swearing are non-religious. Modern Malay do have a lot of religious exclamations but there are easy to spot because they're almost all in Arabic (imported via Islam).

Some examples of traditional Malay exclamations:

Apart from phrases taken directly from Arabic, I know of no exclamations in Malay that's religious.

From what I know of Chinese, I suspect it's mostly the same. But I don't speak Chinese.

The question you might ask is: Where does swearing come from?

The answer is typically related to breaking taboo- in cultures that are highly religious then religious terminology should only be used in the correct context, which makes using it elsewhere taboo. Consequently taking it out of context to express your dissatisfaction at how the universe is treating you is a breach of taboo- "if the universe mistreats me, I will mistreat it." Other taboo topics are often sexual or toilet related, things that are considered "dirty".

With this in mind, what might be taboo in an elvish culture? Maybe being in touch with nature they aren't so concerned about the physical, but perhaps there are other matters they don't talk of- if they are elves of the "mostly immortal" type then talk of mortality might be offensive to them- "death's blade" might be an elvish swear in that case. Perhaps there are offensive types of magic ( "necro-jerk" ) that don't get mentioned or creatures that are considered unclean - maybe even just being compared with humans is offensive to them. The better you understand the people and their society, the easier it will be to find what is "unmentionable" in this culture- that is your swearing.

I find that such exclamations have a common thread: they invoke something the speaker has no control over.

From "God help us" to "Rats" to "Crap," the words always reference something that can have an effect the speaker simply can't do anything about.

Such an advanced culture may invent its own exclamations along this line. Given how much trouble we seem to get into with gene splicing in sci-fi, "Blasted splicers!" might be a good exclamation. This might even hold true long after everyone forgot what a splicer was. Exclamations have a tendency to do that.

As someone who is partial to analog signals and Nyquist frequencies, "aliased signals!" would reach expletive status in my vocabulary pretty quickly.

My father always used to say, which I can't find any religious ties to:

There are other non-religious exclamations with that aren't used in polite company, s-words, f-words, SOB-isms, etc. Any elvish or alien words for disgusting, uncivilized, or otherwise undesirable things could be used for exclamations.

I would think though, that Elves would be quick thinkers and might exclaim exactly what the situation is so others may know what the issue is; we already know that intelligent aliens can do this: 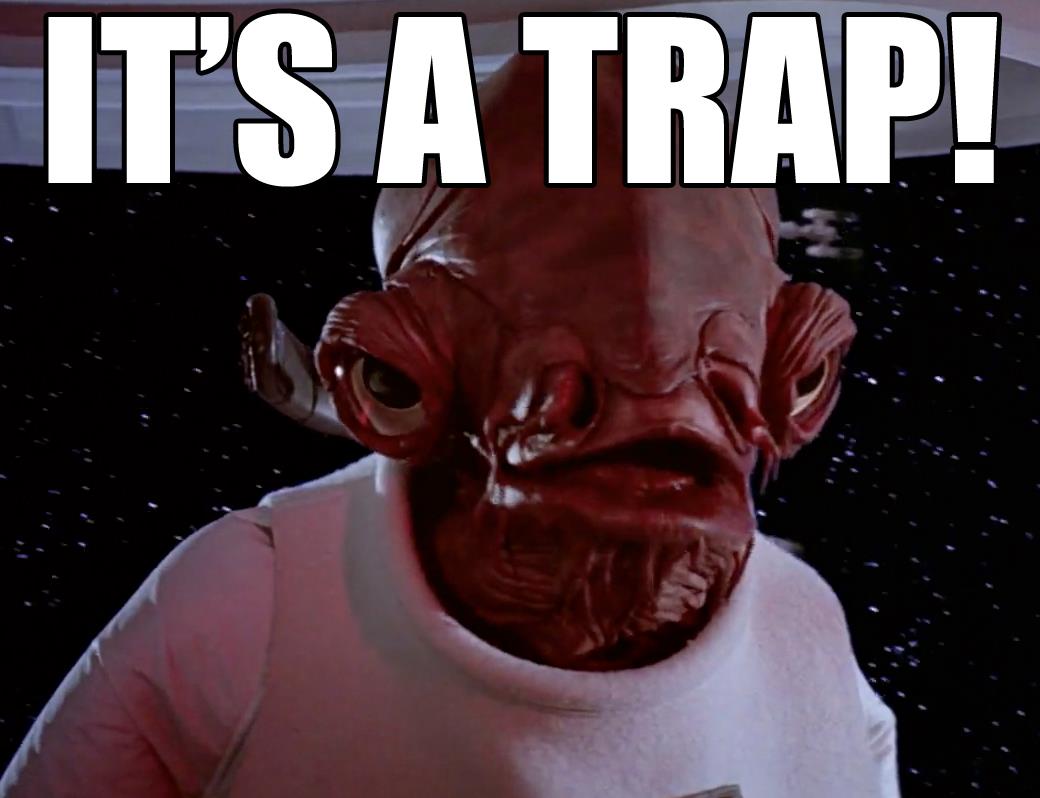 These I use everyday, and I'm about as nonreligious as they come:

"Well dress me in a tutu and call me a bearded she-dwarf!"

"Give a second to collect my jaw off the floor"

Since you're mention the importance of both science and magic, typical exclamations might refer to very positive or very negative aspects of these, e.g. (parts in parentheses optional for origin)

Curses or swear words tend to come from one of two general sources: references to things that are taboo (in human culture, this usually means sex or excrement), or (disrespectful) references to things that are respected. Religious exclamations are generally the latter. So, to replace these, you have to determine, what do your Elves hold in high regard? Since they are magic-users, they might reference the source of magic power instead of a god.

Besides religious figures, other likely objects of respect are figures of authority. For example, the highest English order of chivalry is the Most Noble Order of the Garter. One of the more prominent insignias of the order is a star-shaped pin. This gave rise to the exclamation "stars and garters!" If you have established figures of authority and respect in your Elvish society, you could use them to similar effect.

In English, the excrement- and sex-related terms tend to be considered more offensive than the religious ones, at least in modern times. "Hell" and "damn" are fairly mild, but others are often not even referred to directly. They are commonly replaced with euphemisms, even in mention, like "the f-word" or "the c-word". So, you probably don't want to simply eliminate the religious terms and use these exclusively.

Of course, if you don't like these options, you could always invent your own smegging swears. Any p'tak can do this, but tanjit if it isn't hard to avoid them sounding frelling ridiculous. This does have an advantage, though—if you don't plan to go to all the rutting work of building a whole frakking language for the Elves, then you don't have to zarking explain what "shazbot" and "mee krob" are. Plus, you can just pull them out of your mik'ta, so it's a lot less work, you lazy shizno. Belgium.

Exclamations, if the language and the psyche of the beings has them, could be based on anything awe-inspiring, or be an allusion to an extreme example of the type of situation that caused such an attention artifact.

One might also bring to mind an impossible paradox or unsolvable problem via a succinct idiom. “Now what would Russell's Barber do with that?”

And don't forget the legendary “εὕρηκα !” which comes from the joy of discovery itself and not any deity or other influence of any kind. So another category might be famous (historical, clever word play) ways of saying something literal like (in this example) “I have found it.”

A common irreligious fantasy swear is on a body part or object of an authority figure. That can range from the simple "By King Aurthur's Beard!" or "Lancelot's Great Hammer!" to more... ribald options. I'm sure your imagination can fill you in.

Although many people focus on bodily functions and religious profanity when discussing English curses, these are not the only sources of exclamations used in everyday speech. Some of the most endearing are mild and inoffensive:

By gum! (to avoid taking the Lord's name in vain, no doubt).

All mouth and trousers

As much use as a cat-flap on a submarine

10
How does one create specific swears and slang?
8
Multi-planar planetary rings

10
Would a human culture that developed in a world where audio recording was straightforward also develop written language?
9
How long does it take before dialects branching from a single language become new languages themselves?
2
How do we communicate with (fairly) intelligent aliens?
3
When is the earliest I can hope for a culture to create Featural Writing?
20
What could cause a culture to change their writing style?
25
In a culture that writes in circles, what would the medium for writing look like?
1
Possibility of two-way sign language communication between humans and non-humanoid, dexterous alien