What is a hypothetical, profitable way that the core of earth could be mined?

We know that the inner and outer core of our planet is made up of heavy, valuable metals in high concentrations. So, what if a technologically advanced, space-faring civilization wanted to mine those resources? How would they conceivably go about it?
In this scenario, the potential miners would not care too much about the well-being of any life that resides on Earth, only about the most profitable, efficient way to mine the core. As well, the inhabitants of Earth would either be unaware of or powerless to stop any actions the aliens were prepared to take to efficiently access the core.

Potentially the most cost effective way to mine the core of a rocky planet would be to first hit it very hard with something that removed the crust and mantle. Once exposed, the metallic core would be accessible to mining.

However, it seems relatively counterproductive to do such a thing when the solar system is littered with metallic asteroids that provide pretty much the same resources and are already available to mine.

In fact, a lot of elements that are rare overall in the solar system have been significantly enriched in the Earth's crust due to tectonic and hydrothermal processes. The Earth's crust is probably more valuable to aliens than its core.

If you really desperately wanted to get at core material without immediately disturbing the surface, I would recommend using wormholes to extract material indirectly.

To get at the core, you need to peel away the outer crust of the planet. The most feasible way using current knowledge is to create a "Dyson engine" to spin the planet apart. 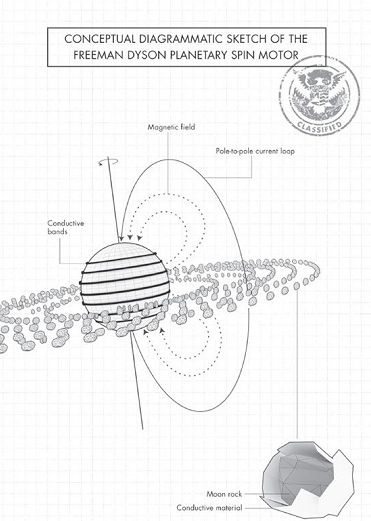 In real life, the theory of a planetary spin motor was thought up by Freeman Dyson and published in a scientific paper in 1966.

He proposed that a planet could be destroyed by accelerating it's rotation about its axis until centrifugal forces become greater than its internal cohesive forces. When the planet's period of rotation dropped to about one hour, it would be ripped apart.

In order to achieve the necessary acceleration of the planet's spin, he suggested wrapping it in a metal grid. This grid would be charged by a powerful electric current, creating an electromagnetic force, which would speed up the rotation of the planet.1[2]

↑ "How to Disassemble a Planet", Space Archaeology, http://spacearchaeology.org/?p=105

Obviously it strongly depends on the strengths of the civilization trying to do the mining and the technology available to them. However, regardless of the civilization, mining a planetary core would most certainly be made easier by cracking the world open with a massive weapon or mining charge.

Equipping a space station or similarly sized ship with a colossal railgun capable of launching enormously dense projectiles could do significant damage to a rocky planets crust depending how big you wanted to go with it. Such an impact, or series of impacts, could create a massive crater many, many miles deep.

It's theoretically possible to blast off a worlds crust with a large enough nuclear explosion, though there would probably be safer and more cost-effective methods. Thermonuclear weapons only have practical limits to us cavemen here on Earth due to our technology (missile size, delivery system, etc.) but a powerful spacefaring civilization could probably make something as large as they want if they're just going to toss it at a planet. Detonating a massive nuclear weapon on a planets surface will probably blast off a significant portion of its atmosphere and damage the crust, but probably won't penetrate deep enough unless it was delivered in a way that could shoot it deep below the planets surface (see Railgun).

Alternatively, you could focus the blast into a beam or cone with a shaped charge instead of just slamming it into the planets face. It would work much the same way as a HEAT shell fired by a tank or man-portable launch system, only on a scale so much larger. The US government has kept a particular project classified since the 60's called Casaba Howitzer, though admittedly I don't know much of the specifics.

Might not sound as fun, but if this civilization could maneuver a small moon or planetoid into another, that could crack open two birds with one stone and make a huge mess while doing it. Asteroids might work depending on the size and composition of the planet being mined, but it probably wouldn't have a large enough yield to completely open up the crust.

An antimatter weapon would undoubtably do more damage than a nuclear weapon of a similar size, but delivering it in a way to penetrate the planets crust would prove difficult unless the antimatter was applied directly to the crust to erase it, so to speak. If the planet had no atmosphere, a beam of physical antimatter could be used to just cut through the rock with incredible ease, though the sheer destruction caused by the annihilation of the particles would make it a very, very messy process.

If we go to the higher end of the sci-fi spectrum, a machine capable of manipulating gravitational fields could be used to rip a planet apart by constantly stretching and compressing it until fractures began to appear in the crust. If a civilization has the capacity to produce enough energy to create such a thing, they probably eat planets on a daily basis.

By drilling a series of gigantic holes in a pattern and filling each one with gigatons worth of explosives, you could possibly surgically crack off a piece of a planet. This is similar to the way modern quarries blast away large swaths of stone. The explosive of choice might be thermonuclear bombs, but antimatter could work as well. The fracture pattern would be entirely dependent on the arrangement and quantity of holes drilled.

You surround the planet with very large solar sails, balancing them with the planetary gravity, and concentrate the sunlight in a few points.

At the same time, a superconducting Dyson ring in orbit interacts with the magnetosphere and sends energy pulses down the throat of the resulting firestorms.

Other, much smaller magnetic coils in low orbit capture the outflux of particles, separating and accumulating them in already-refined form.

You probably can't reliably harvest any of the lighter elements, but you should be able to get the rest.

It must be noted that the same method would work way, way better with smaller asteroids, so it would make sense only if the mantle contained something valuable not to be found anywhere else.

Another possibility would be that of directing asteroids to impact at a shallow angle, "skimming" the crust and sending back impact material in orbit, where it could be recovered. This is how martian meteorites came to Earth.

Core? As in not mantle rock, but core rock? Ouch. Potential energy to lift that is measured in km/s equivalent.

I don't think it's doable without taking the planet apart. If you can do that, then you have tech indistinguishable from magic (the best tech always is...)

Remember that planets are very weak compared to gravity. There is a reason that any asteroid more than about a few hundred km across is more or less round. Consider that the wrinkles in the surface of the Earth from highest mountain to deepest trench span about 25 km. The radius of the earth is 6400 km, so the bumps are less than 1/250th the radius.

The commercial challenge is that the core has exactly two things - iron and thermal energy. Iron is plentiful in other places that are much easier to mine, leaving energy. Mining energy does not require drilling any deeper than the top of the mantle.

The technical challenge with mining the earth's core is that the core itself is roughly the same temperature as the surface of the sun. The structure of the earth is a blob of molten minerals surrounded by a crust the approximate relative thickness of an orange peel. "Splitting" a planet like the earth would involve shattering it into droplets with sufficient energy that it didn't re-coalesce immediately. The last time we saw something close to this type of event in our neighborhood we ended up with a moon.

The nearest thing to a commercially and technically feasible way to mine a planetary core is the "core tap" for geothermal power. You will need thousands of miles of unobtainium pipe and ssomesteam turbines.

Not the answer you're looking for? Browse other questions tagged science-based technology aliens earth mining .

1
How can advanced aliens overclock our Sun?
18
Is a coral-based planet possible?
11
What metals other than calcium can be used to create alien bones that won't also engender a human-toxic environment?
4
What are some examples of minerals that Earth might require in the future from space?
7
Are "Bomb Catapults" actually feasible?
8
How would underwater weaponry and technology look under high pressure?
3
What (if anything) can cause a substantial and stable shift of the magnetic poles of a habitable planet away from its geographical ones?
7
Can a rogue planet have a habitable surface due to geothermal heat?