There is a planet (let's call it Bob) where an ancient and powerful race once lived. They built giant gravity lifts to help move massive amounts of water high up into the atmosphere for who knows what (maybe they liked heavy rain? sadly they didn't leave any notes). They are long gone now, but their gravity lifts are still running (well one of them is at least). It is constantly lifting a kilometer sized column of sea water up to the edge of space at which point it rains back down over a nearby land mass (the current inhabitants think the sea god is fighting the sun god but that's another story...)

Would such a system be enough to keep the island constantly shrouded in thick, dark rain clouds?

The gravity lift is in the shallows just offshore and the island is a couple hundred kilometers across (I'm guessing the rain would be more intense on the gravity lift side). The gravity lift runs constantly thanks to some unknown power source and has been pumping millions of tonnes of sea water every day for millions of years and will probably continue to so for a long, long time.

I imagine it would look a lot like this, only with a much, much bigger column of water and with the dark clouds blotting out the sun for hundreds of kilometers in all directions. 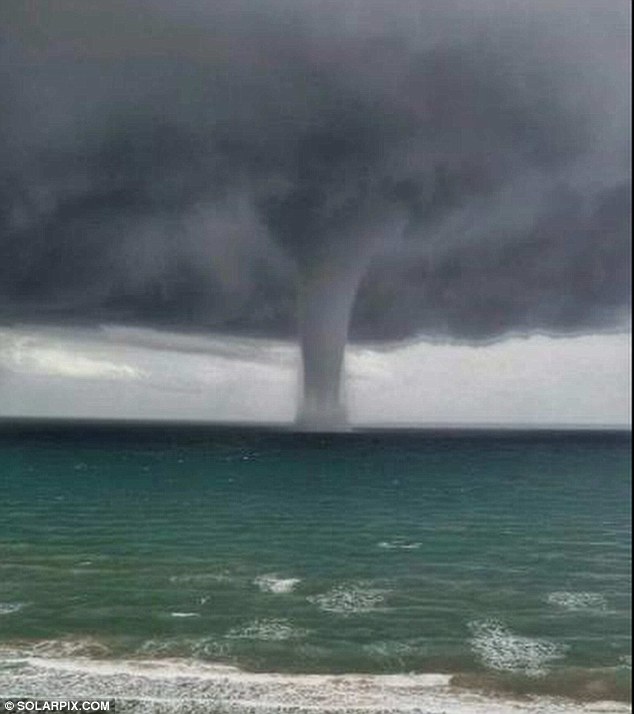 You're not generating clouds like this, you're generating (salty) rain directly. Look at the Angel Falls for the effect you're going to get. At the top it's a waterfall, but by the time the water is about 2/3 of the way down it's effectively falling as rain. You're going to have much the same effect over a much larger area, the rain will constantly fall, with a permanent rainbow in daylight, but you're unlikely to see clouds. 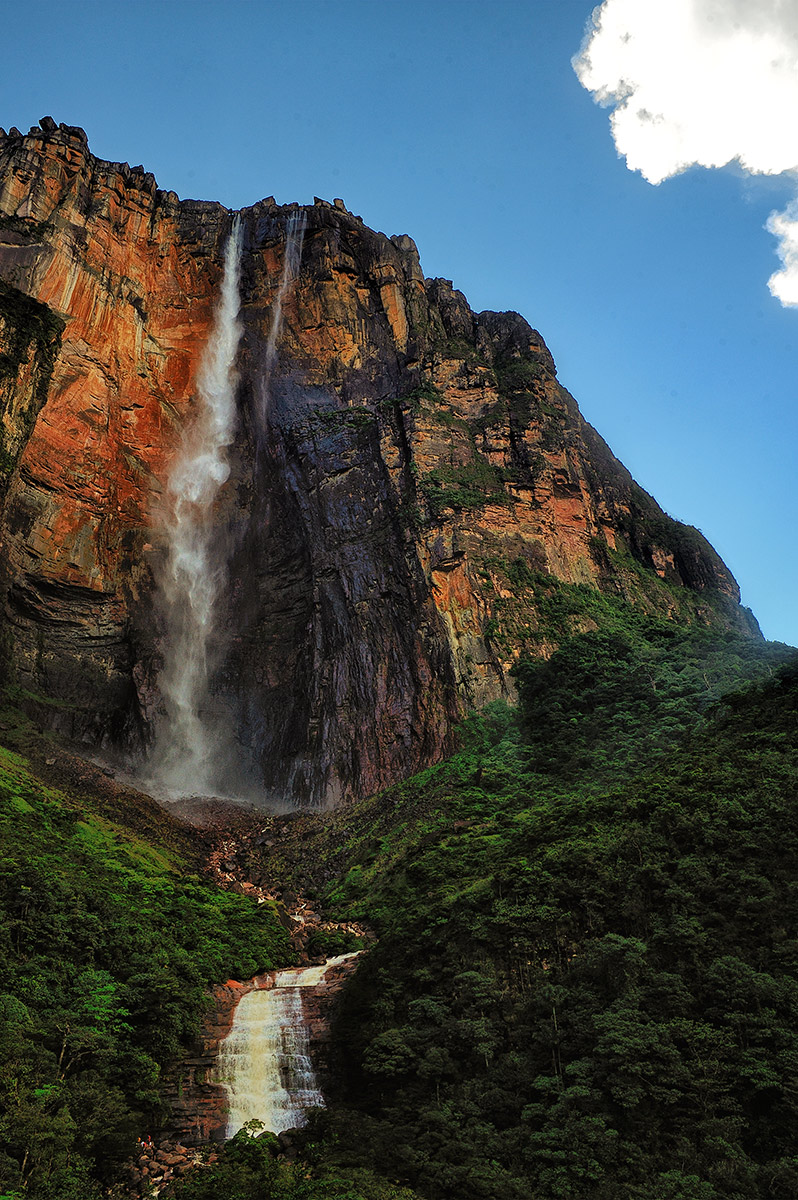 So it takes a million joules per kg to get up there.

Now we drop it. Specific heat of water is 2,260 MJ/kg. Which is about 5 times the energy it takes to get to boiling.

So, incoming water will be heated to boiling point by air friction, and somewhere between 1/4 and not quite a half will be evaporated. (Some of the heat will be transferred to air. )

Also, as it falls, Coriolis forces bend the column of falling water to the east.

Water as it starts to fall from near vacuum will evaporate from the surface of the drops, chilling the remaining water, likely until it freezes. It's cold up there anyway. So you have a column of hail.

So you end up with a plume of hot steamy air slanting down from the top of the lift to the east. The atmosphere on Earth thins by half every 18,000 feet. So 3/4 of the air friction will be generated in the last 36,000 feet.

The upper part of the column will look like a white pillar curved to the east at the bottom, with almost razor like edges. Not much wind to push it around until you get to the top of the troposphere. At the bottom, the drops start to slow down, thaw, then heat up. They are boiling.

But hot air rises, and water vapour anyway is less dense than air, so now the plume feathers upward. So the bottom of the column is the the source of high energy very strongly convecting very wet air.

At this point my intuitive meteorology is gasping a bit, and much depends on how fast the water is being pumped out. If very slow, you may just end up with a permanent trail of cloud down wind. If fast, you may have a fixed location thunderstorm, with tornadoes. If really fast you might have a permanent hurricane.

You will have rain, not clouds

I didn't believe Separatrix's answer, but after investigating, I find out that he is right. The problem is that they are lifting sea water an the ocean is salty. The gravity lifts will be releasing a lot of salt with the water you are spraying into the atmosphere.

First, some background physics; dense, low lying clouds of the type you are imagining are stratus clouds. Stratus clouds are composed of droplets in the 5-20 $\mu$m range, mostly (reference: Miles et al, 2000). Droplets of this size have sufficiently low weight to surface are ratio that they can be kept aloft as...clouds. If they get much larger, their weight becomes great enough that they fall as rain.

In order for droplet to get larger, they must condense around cloud condensation nuclei (CCN). These are usually small aerosol compounds. This i the concept behind 'cloud seeding' to produce rain with a compound such as silver iodide. In any case, salt is an excellent CCN (reference: King et al, 2012).

So you are pumping water and salt into the air, and as the water evaporates a la Angel Falls, the salt particles are freed to condense as crystals. As soon as the salt crystals reach critical a diameter of about 0.2 $\mu$m, they start to act as CCNs, and cloud droplets start to condense around them.

By spraying salty seawater into the air, you provide the raw materials for clouds, but you are also 'cloud seeding' the clouds at the same time you create them. While there will certainly be some cloud formation, most of the water will condense around salt crystal particles and fall as rain.

While clouds and rain most often go together, they don't always. I've been in rain showers under a cloudless sky. Basically, the drops form faster than the mist. The condition is called Serein.

In this case, where water is being pumped artificially into the sky, I can easily imagine that not a single cloud would form. Unlike the process of evaporation, where water has yet to form into droplets, permitting clouds to form, you're kinda going straight to droplets.

Probably not the effect you wanted
One key parameter that you need to consider carefully is the rate of water flow. Even with a 1 square km opening, if it’s just dribbling over the edge it’s not going to do much, but if it’s pumping out at 1 cubic km per second then that’s another story entirely. The effect depends heavy on this parameter.

Assuming that the flow is very large, one of the first effects would be evaporating into the vacuum of space cooling the water and possibly freezing it or portions of it. Under equilibrium conditions the water would rapidly evaporate and disappear into space. But with huge volumes of moving water there would be no time to establish equilibrium so a large proportion of it would fall to earth.

As the edge of space somewhere around 62 miles up, it will mean pumping an enormous amount of potential energy into the upper atmosphere. The pressure would be very low (continual evaporation of water will provide some pressure) and the water will rapidly accelerate into the lower atmosphere. As the air density increased in the lower levels of the atmosphere the water would be heated due to friction and most of it would evaporate, what was left would remain as fine warm salty droplets.

If the flow rate were high enough then substatial amounts of salt water would eventualy reach ground level, but in order for this to happen the amount of moisture introduced into the atmosphere would be astronomical.

Large inputs of energy and moisture combined with a lot of displaced air would probably generate massive storm systems in the area and the location might become quite unstable with violent electrical storms and hurricane strength winds and an ongoing basis.

Not the answer you're looking for? Browse other questions tagged technology science-fiction or ask your own question.

9
Would it be possible to fly through a rain of missiles?
7
How to quickly leave a planet for another planet en mass starting out from stone age tools?
124
Why would giant mechs use melee weapons?
4
Is it possible to create a giant biological “mech”?
5
Would giant worms cause environmental damage?
5
How to catch giant sea creatures?
4
How to harvest resources from a gas giant?
41
What could be the right powersource for 15 seconds lifespan disposable giant chainsaw?
10
How to supply water to a coastal desert town with no rain and no freshwater aquifers?
1
Could we move a gas giant by venting its gas?