Jane was different from the other kids. While all the other kids were playing with fire, Jane played with ice. Now, Jane has grown up and is an accomplished scientist or engineer in your discipline of choice.

Jane never got along with Joe, and after an argument between them, Jane has decided to literally freeze their relationship, by completely freezing Joe's entire body. (In this case, we can take "freeze" to mean "reduce the temperature of the object in question to 273 kelvin or lower, and turn any liquids into their respective solid forms".) She realizes that this will probably get her into trouble with the authorities, but she's okay with that.

Both of them are ordinary adult humans without any superpowers. Jane has access to whatever equipment and facilities might reasonably be available to a scientist or engineer in your chosen discipline. The technique is not required to work (or not work) in any particular location; it just needs to work somewhere she can plausibly get Joe. (So no cheating by taking a trip to Titan, and the South Pole on Earth is probably stretching it.)

Joe does not need to survive the process, or perish from it. He is, however, not a willing participant.

Jane is allowed to work anywhere it's reasonable for someone with her credentials to be working, but it's a big bonus if she doesn't require the assistance of coworkers to pull this off, as said coworkers might not be as inclined as she is to deal with the legal backlash.

What can someone like Jane do in order to, in as little time as possible, freeze Joe? Roughly how long will the process take?

Magic not allowed; answers should conform to known sciences.

Jane is an accomplished scientist or engineer and she has access to liquid nitrogen, as it is used in the facility where she works. The work place can be as simple as a food processing plant.

a. Jane induces Joe to go next to the liquid nitrogen tank (like the one in the picture). This is variable, from minutes to hour.

b. She blows the bottle, getting Joe drenched in liquid nitrogen. This is a matter of seconds.

Total: depending on how much Joe trusts Jane. 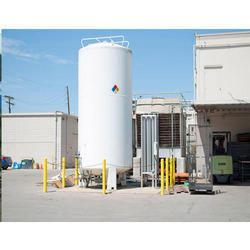 Note: What Jane is trying to do is also used in Promession

You may want to look into cryonics. Cryonicists have got all that figured out for Jane. They have not figured out how to thawn Joe back safely yet, though. But then again, according to them, it's just a matter of time until someone figures that out.

But seriously, they take freezing speed into account when you go freezing a corps... Er, person.

Their technique is really simple. Throw the body into a container full of liquid nitrogen. It takes only a few seconds a few hours before the body gets completely frozen. More about it in this link:

On arrival it is put into an arctic sleeping bag and cooled by nitrogen gas to -110C over several hours.

When it does, it will be rock solid. Don't just believe me because I wrote that. Look at what it does to a few things small enough to freeze in a shorter amount of time:

Not the answer you're looking for? Browse other questions tagged science-based humans temperature or ask your own question.

59
What is the least expensive way to annihilate humanity?
4
Is it possible for the oceans to freeze solid (at least on the surface)?
3
What's the fastest way for a creature to move across land?
9
Smartphone camera resolution can image a human retina: can we save retina biometrics?
1
Can this mind control work?
3
How fast would a person need to be to cross a gap and prevent a gunman from shooting someone?
8
With as much scientific accuracy as possible, how would chemicals injected in one's body be removed?
3
How could a single dragon pose a threat to more modern human settlements?