I have a group of humanoid creatures that is in a foreign country and looking to set foothold there. They are not interested in exploring and do only want to survive. They can provide for themselves through foodsources in their encampment.

They live in a small camp that will eventually evolve into a castle. They know how to abuse heights in combat. E.g. position archers on hills, put the camp on a hill, etc.

What reason would this society have to use melee weapons in combat?

Tech level is medieval, no magic or very low magic.

I am thinking of a scenario where the camp is attacked by multiple soldiers in heavy armor. If the "defenders" can spot the "attackers" early enough, shouldn't ranged weapons like ballistae, trebuchets or catapults always be more effective than meele weapons?

The question boils down to:

How can I explain Melee units in a society that only focuses on surviving and will never attack? I am looking for any possible answers that improve the meaning of meele combat but don't render ranged combat impossible, just not that huge of an advantage against meele. This can be anything from weather/seasons/attackers armor etc.

Ranged doesn't have that much advantage over large numbers without accuracy and/or rapid fire, which didn't quite happen until after the industrial revolution.

This means a large wave of infantry can overwhelm the ranged defenses and just roll over the camp.

Also there are the large Roman shields, one of their tactics was to group several soldiers into a square and interlock shields to defend against arrows. 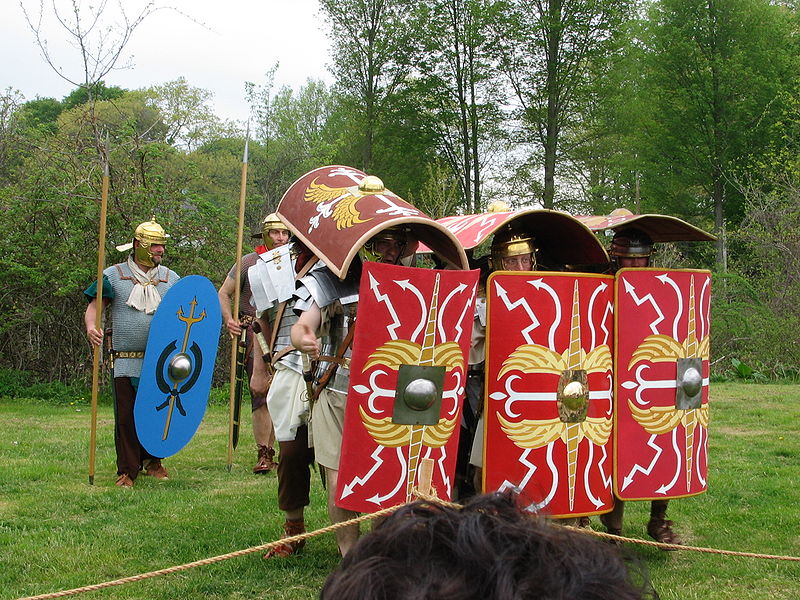 Well for the same reason people in a besieged city or castle would. The attackers could break though the defenses. The reason for ranged attack weapons was not only to keep your enemy farther away, but to kill/maim them before they could get close. When dealing with a horde all you can do is soften them up a little and thin the ranks. That was a common tactic in the middle ages and even by the Romans. Attack with overwhelming numbers, 500 people defending in a castle? send 5-10,000 at the walls. If even half make it they will need to be repelled by more than arrows at 5 ft. if you don't have high walls to scale, only high ground, you better be able to do more than pull a bow or crank a trebuchet down.

Archers alone cannot hold castle walls. A simple siege tower can put enemy melee troops on top of enemy walls relatively simply and you are now in a melee combat situation. If all you had was archers in a castle, it would actually fall pretty quickly to a semi-intelligent siege.

Byzantines were experts in these tactics and their walls would be 5 or 6 deep. After getting by the second or third wall, the enemy would be funneled into a narrow flat area between two walls...and then a wave of Byzantine heavy cavalry would charge down the narrow and flat corridor trampling anything in their path (at the time, there was nothing heavier or more intimidating than heavy Byzantine cavalry, tanks of the dark ages). This tactic made for an incredibly strong defensive role for a troop that's often regulated to 'attack only'. In the right setup, archers are really only a minor part of a castles defense.

What humanoids ever do what they do, and develop skills and technologies, solely from logical observations about their current conditions? (Well, gamers and social Darwinists, both impractical examples.)

People have skills and technologies from tradition and experience of the past, not from a logical specialized analysis of their current circumstances.

Even if they were being logical, they'd be foolish to only have ranged weapons. They might emphasize ranged weapons, but if they completely lack melee skills and weapons, they're probably very vulnerable:

Also, your people probably have melee weapons for personal contests with each other, and tools that are reasonable melee weapons anyway, such as axes and hoes. I don't think there are any humans who didn't know about spears, axes, knives and clubs. Spears and axes are pre-human technology.

So, ranged weapon emphasis sure, but absence of melee weapons, not without some non-practical reason, such as a cultural proscription. Maybe their tribe was once nearly wiped out by people using melee weapons, and the survivors decided such weapons were immoral/taboo. This would however be a practical weak spot.

Not the answer you're looking for? Browse other questions tagged warfare medieval survival or ask your own question.

17
How can I explain why my mechs don't sink into the ground?