For us earthlings, the concept of "year" came from the observation that the Sun reaches a minimum and a maximum span in the rise-set path in the sky.

On a planet experiencing extreme perihelion precession (about 30 degrees) is there any recurring astronomical event which can mark the end of a year for the inhabitants of the planet? (picture is meant to illustrate the extremity of the precession, not the eccentricity of the orbit) 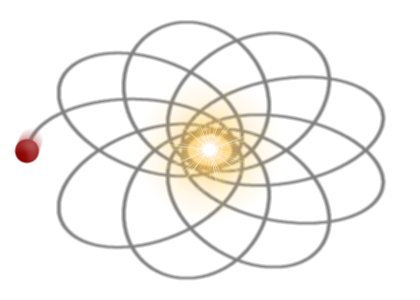 I would propose "The day of the burning Sun", or "The day of the dim Sun". Basically, either the perihelion or the apohelion could mark a periodic event defining the end of a year and the start of a new one. Your inhabitants would see the Sun going away and going back peridically, which could hold quite an interesting mythology.

The cool thing is, they'll notice that the stars aren't at the same place each of these special days. If your precession is of 30° exactly, this implies that the stars will be at the same spot relative to the day every 12 years, which could lead to a special event in your inhabitants cultures. If it is almost 30°, you can have almost a 12 years periodic event (and keeping the big party), plus a real coincidence with a previous orbit (exact same stars position) every few centuries or so (and you can throw an even greater party!).

(Of course, as @Michael Kjörling stated, life would have a hard time developing on such a planet. But let's forget that.)

Not the answer you're looking for? Browse other questions tagged astronomy time-keeping or ask your own question.

1
Accurately Measuring Sidereal Years For Calculating Tropical Year
4
Measure time with longer days?
42
How do you tell time on a world with 9-year days?
2
How to calculate precession cycle's duration?
1
Detecting an astronomical anomaly
2
Covering up an extinction level event caused by an astronomical anomaly
0
How to determine the shape of the world given that there are no astronomical cycles?
33
What's an astronomical event which happened about 10,000 years ago, which humans could have noticed?