Could plant life evolve on a world with a toroidal magnetic field?

Let us assume that my new world has within its rings, shells, and blobs of remarkably cool magnetically-involved stuff such that its magnetic field is toroidal (shaped like a donut) rather than spherical.

Could at least plant life evolve on such a planet?

The following image is more exaggerated than I had in mind 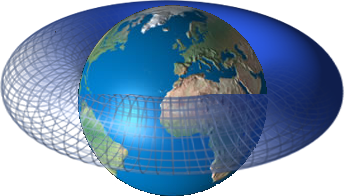 Assuming that this planet is otherwise Earthlike, and that it has existed for a similar period of geological as planet Earth, then it is high probable plant life will have evolved there. This also assumes that the planet's biosphere has undergone the metazoic transition and multicellular lifeforms are present. Convergent evolution will ensure some version(s) of plant life will develop.

That the straightforward stuff out of the way. The role of the magnetosphere on plant evolution on planet Earth (because that's the only planet with a magnetosphere and evolved plant life) is highly probable, but is not known in detail.

The geomagnetic field (GMF) is a natural component of our environment. Plants, which are known to sense different wavelengths of light, respond to gravity, react to touch and electrical signaling, cannot escape the effect of GMF. While phototropism, gravitropism, and tigmotropism have been thoroughly studied, the impact of GMF on plant growth and development is not well-understood. This review describes the effects of altering magnetic field (MF) conditions on plants by considering plant responses to MF values either lower or higher than those of the GMF. The possible role of GMF on plant evolution and the nature of the magnetoreceptor is also discussed.

The discussion of the role of the geomagnetic field (GMF) on plant evolution deals with these specific areas.

In the course of biological evolution, the fossil record tells us mass extinction occurred several times. One of working hypothesis to explain such mass extinctions is the cease of the GMF when the geomagnetic pole was reversed. Because the strength of the GMF is strongly reduced during polarity transitions, when compared to stable normal or reversed polarities, we recently propose that these variations might be correlated to plant evolution (Occhipinti et al., 2014). We do not have measurable records of GMF polarity reversal before late Jurassic, therefore we can only compare variations of GMF polarity with diversion of families and orders of Angiosperms in the Tertiary and Cretaceous periods. Angiosperms are regarded as one of the greatest terrestrial radiations of recent geological times. The oldest Angiosperm fossils date from the early Cretaceous, 130–136 Myr ago, followed by a rise to ecological dominance in many habitats before the end of the Cretaceous (Soltis et al., 2008). It has been shown that the periods of normal polarity transitions overlapped with the diversion of most of the familial angiosperm lineages (Figure 2). This correlation appears to be particularly relevant to Angiosperms compared to other plants (Occhipinti et al., 2014).

This is followed by brief remarks on possible mechanisms for the influence of the magnetosphere on plant Evolution.

The greater incidence of high-energy particles, and direct effects of magnetism on biological system during reversals period might contribute to alteration that eventually led to mass extinction. Because plants, in general, do not change their orientation once germinated, there might be distinctive action of the terrestrial magnetism on the growth and physiology of plants (Yamashita et al., 2004). Magnetoreception might be a driving force contributing to plant evolution, but in order to prove such hypothesis we should be able to demonstrate that some plant genes are affected by MF reversals.

The paper offers the following concluding statements. While they are somewhat sweeping and broad, they do give a favour to arguments supporting a role for the influence of the magnetosphere on plant evolution.

Life evolved on Earth along changes in the GMF life-history. Any other environment lacking a GMF is expected to generate reactions in living organisms. These concerns becomes urgent questions in light of planned long-term flights to other planets (Belyavskaya, 2004). Understanding GMF effects on life will provide the fundamental background necessary to understand evolution of life forms in our planet and will help us to develop scientific recommendations for design of life-support systems and their biotic components for future space exploration.

This answer has so far established two propositions. One, that planet lifeforms are most probable products on evolution on an Earthlike planet. two, that magnetic fields will have some influence on plant evolution. Much of that magnetic influence has not been fully explicated or thoroughly even on our planet. Therefore, any proposals about what the influence of a toroidal magnetosphere will be on plant evolution will be tentative at best.

Plant evolution will be influenced by direct magnetic effects in the equatorial regions of the planet. Assuming magnetoception has a direct impact on genes, as was proposed by Maffei, then their evolution will reflect this influence. However, it is currently there is not enough information even speculate on what this influence will be and what its outcomes are likely to be for equatorial plant life.

Plant life in the planet's polar regions will receive higher doses of high-energy particles, for example, cosmic rays and solar particulate radiation. While higher mutation rates at the genetic level are not considered by evolutionary biologists as major drivers of evolution proper, plant evolution subject to higher incidences of radiation will develop higher levels of variance. The higher variance will produce, paradoxically, both higher rates of adaption and higher rates of extinction. Polar plant life, on evolutionary timescales, will be in for more exciting time.

Those at the equator will also be affected by geographic distribution and its topological environments. Two polar plant biomes will in all probability be quite different from each, due to their separation by the band of equatorial plant life and the accumulation of random evolutionary factors arising from their higher rates of variance.

The paper by Maffei cited above is an absolute gold mine in its detailed discussions of the effects of magnetic fields on plant development. Highly recommended.

Not the answer you're looking for? Browse other questions tagged planets evolution magnetism or ask your own question.

9
Life on an Earth-like planet with solid core?
13
What is the minimum planetary mass to hold an atmosphere over geologic time scales?
8
Could a solar flare create terrestrial areas of background radiation?
25
What would be the side effects of a massive, strong magnetic field?
10
Can the Meissner effect explain very large floating structures?
9
How do I give my planet a stronger magnetic field? Playing with variables
3
How would the strong magnetic field of a white dwarf affect humans inhabiting a planet that orbits such a star?
5
How would a torus planet's magnetic field work?
3
What (if anything) can cause a substantial and stable shift of the magnetic poles of a habitable planet away from its geographical ones?
3
How Habitable are these Planets?