How would magic controlled insects go about repairing a magical scarf?

The end questions are about the mechanics of the repair work itself for certain parts of the scarf. Everything else should be explained below.

On one of the worlds of a Binary Planet, a civilization has developed Saturn 5 like rockets. They are attempting to explore/exploit their sister planet. (both planets are earth-like and habitable)

On the sister planet, no civilization has been observed from orbit or by probes. However, ground exploration teams uncover a group of Druids.

The Druids are mostly peaceful but, they do have a fighting class of Rangers for protection. (The visitors are aggressive in nature)

How The Scarf Works

This is from a 1960's technology point of view.

The Druid Rangers seem to have "magical" scarfs that move almost like water. The scarfs can deflect the bullets or "reach out and catch/slow" them (ie absorb the momentum by caving in) before the bullets hit the target.

If caught in the wrong spot, the scarf can recieve damage, such as tear or bullet hole, etc. This is only because the scarfs aren't what the Druids would call "Military Grade". From a distance, a visiting Scout observes a Druid repairing a scarf (that has minor damage) using mostly insects.

This should help limit your answer to what is/isn't possible.

Source of the Druids Magic

The world that the Druids are on is actually a "4H Summer Camp" for an advanced (eg Type 3) civilization.

The Druids are the camp staff. There are no kids; its off-season. The Rangers are rent-a-cops: no guns, no military-grade gear.

The visitors are actually the descendants of an "Amish-like colony" of that advanced civilization. They look identical to the Druids; "Prime-Directive" like rules don't apply.

Unlike a Leisure Planet (Star Trek: Original), there is no "interior complex" to the planet. The camp is a "primitive camp" within the boundaries of said "Amish-like Colony"

Assume the insects resmble Earth insects. Some minor adjustments are allowed. The answers need to fit within the style of what has been described. Being from an advanced civilaztion, some handwaving is allowed.

The more variaty of insects used, the better. The more exotic the insects are, the better.

How do the insects do the repair the "reflex muscles"?

Since spider's silk a pretty complex protein in itself, it is within the realm of reasonable for an advanced spider-bot to be able to make all sorts of other proteins. In that case, they spider bots can generate constituent muscle fibres that you need.

Assuming that the scarf has the bio-engineered ability to heal itself, then when spiders place compatible muscle fibers against damaged areas, the scarf should be able to integrate them. Now, speed up this process with some advanced healing factor and we are done.

How do the insects do the final stitching of the outer layer?

A variety of bugs sew. Weaver ants or orb-weaver spiders, for example. Simply use one of them to do the final stitching.

How do the insects make a patch of cloth for the larger damaged areas?

Well, bugs can make some pretty large complex objects. Single spiders can make webs meters across. Ants might be particulary appropriate for this purpose, since colonies organize themselves to hold leaves into certain positions before they start weaving them together. They could easily do this with fragmented pieces of scarf, while muscle fiber spiders extrude the bits needed to patch everything back together. 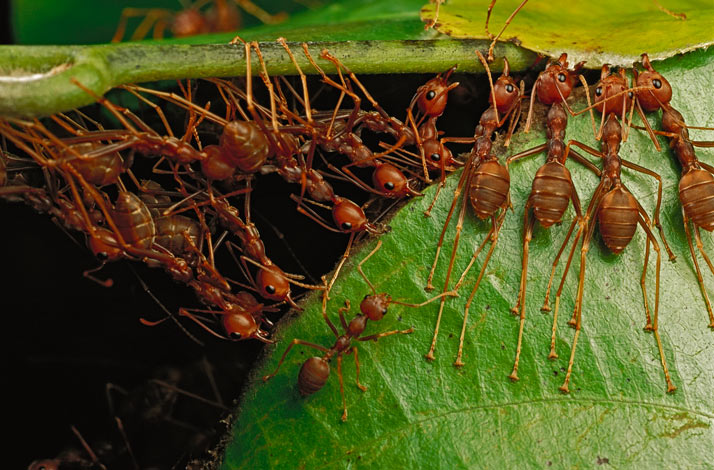 Your description made me think of weaver ants. They create hives from leaves by pulling cooperatively and then glue them together using their larvae, which can excrete silk.

Not the answer you're looking for? Browse other questions tagged science-based bio-mechanics insects .

24
What is plausible biology of ocean-dwelling, tool-using, intelligent creatures?
8
Weapon design: a conceivable superheated sword capable of cutting through most things
34
How would giant, secluded, underground-cave-dwelling insects get enough food?
8
How much medical information could we gather from a wrist-worn device?
6
How would Humanoid Insects Molt?
2
can Elf be in family with Fairies and Angels?(updated)
3
How Would Computer Traits Benefit Codeborn As Compared To Regular Humans?
5
How could a living biological sword survive a spaceship crash and then isolation for millennia?
2
Substitutes for lead-acid batteries
2
How would warm-blooded insects work?