Remember the Xenomorphs from aliens, how they didn't show up in heat vision? I was wondering how you could recreate that effect biologically... a creature which doesn't pop-up on IR (at least, not obviously), because its surface temperature is about equal to its surroundings.

It may not always be in this state, but rather it may be a defence mechanism to prevent detection from creatures with IR.

Just as I was contemplating this, L.Dutch posted an answer saying in part that one of your two options would be to

1. tune your surface temperature to that of the environment/background (unpractical if you are out of tropical zones and want to stay alive)

I'm going to go out on a limb and say that it's not so unpractical; especially so if you are happy to make this a temporary defense against merely IR sensing.

There are two obvious ways that I can think of:

Both options are viable in that there actually exist real-life creatures on Earth which use them. You will need to tweak those approaches slightly, but given some appropriate selection pressure, neither would seem completely unreasonable.

As a bonus, you can now have creatures which are difficult to detect in IR both at high and low latitudes! (Near the poles and near the equator, respectively.)

Whichever way you go, keep in mind that this would be very specialized against something hunting by IR. The instant you face a predator that hunts by scent, or sound, or sight, your defense becomes a huge liability. Since different predators in your world would likely evolve different hunting strategies, you should plan accordingly if you don't want your species to go extinct very quickly.

I got your room temperature animal right here.

If your animals are cold blooded they will not show up on infrared. If they are warm blooded but can cut blood supply to the skin and let that cool to ambient, or maybe cool it with evaporation those areas will not show up very well on infrared: an example - this cat has a cold nose. 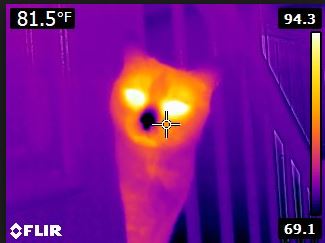 The emitted IR radiation is proportional to the 4th power of the absolute temperature AND to the emissivity of the surface. You have then two options:

Point 2 can be achieved by modified melanocytes which can modify the emissivity of the skin to match the background, more or less what octopuses do with their color.

Not the answer you're looking for? Browse other questions tagged creature-design xenobiology biochemistry stealth endothermic-reaction or ask your own question.

23
A Human Hunter with Sonic Powers?
7
Creatures with weaponized tails
6
Help me Explain this Alien's Traits
9
Alien Biological Temperature Control?
12
Could an organism see in infrared light as well as normal light, using its brain to process what it sees into a single image?
12
What would be the psychological differences between a human and an intelligent detrivore?
7
How plausible is a civilization, or life, that perceives time in reverse?
5
Creating a scientifically semi-valid super-soldier, addendum: Metabolism
3
“Realistic” Dwarfs Part One: Bioluminescence for active Vision