How would a crouching frog person fight?

Suppose I have some frog people, who are of slightly smaller frame and build than a human. I was imagining that when they fight, both in a war and dueling context, they would crouch down, a bit like Suwako over here. The one on the left. 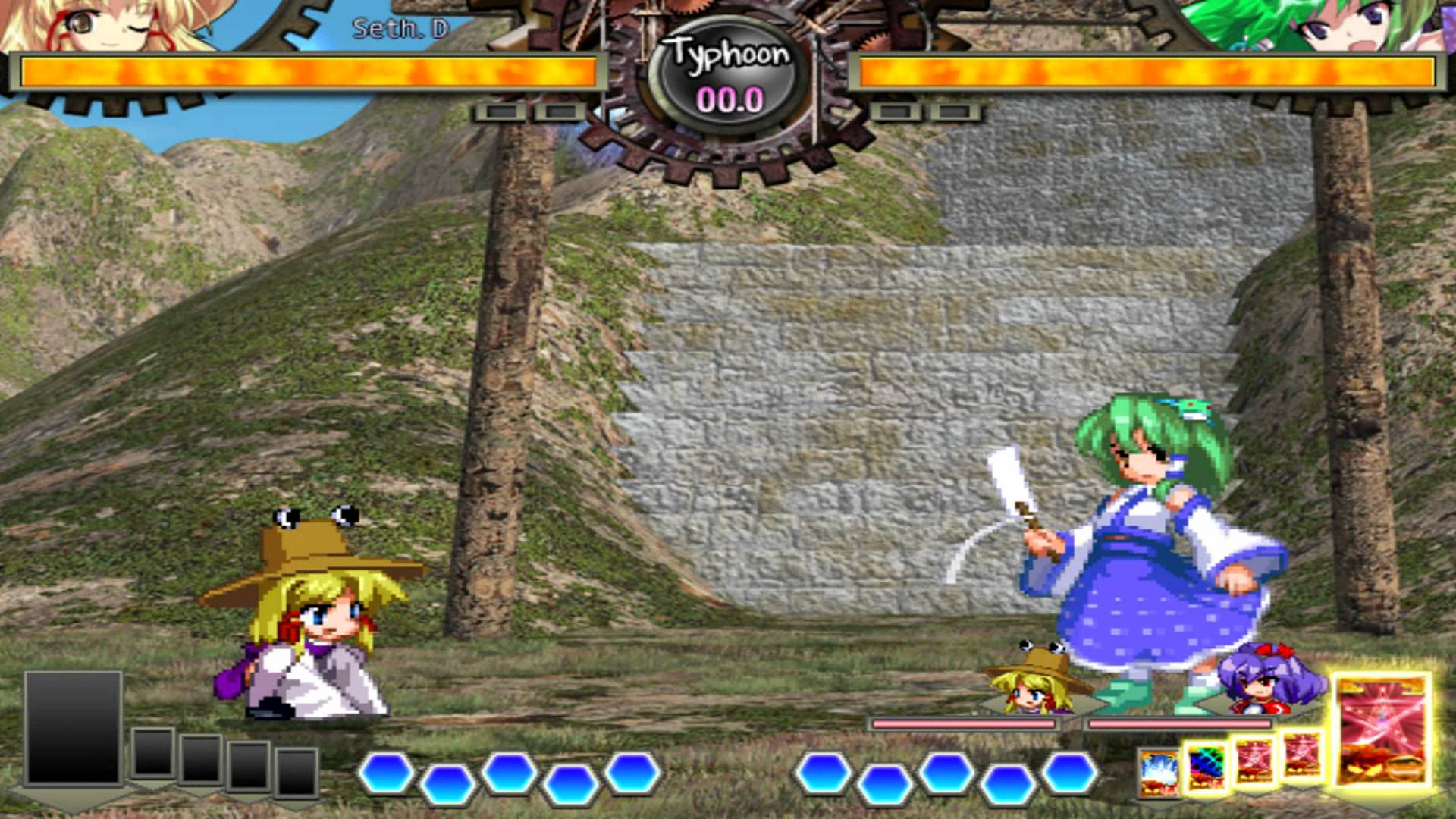 I'm looking for answers that address how they would fight both individually and in groups (in battle).

I'm not a frog-person with disproportionately strong legs, nor do I know any in real life, but let me offer some analysis based on many years of experience in medieval-style combat, both individual and melee fights.

The shield: You're describing a shield that, in combat posture, covers most of the frog-man's body. This provides good defensive coverage from the front and can be used to intercept blows coming from front and up. It will be harder to move into a position to protect from range weapons, but effective when it can be used (large area). I haven't done a load-bearing analysis of shield-sized rafts, so I am assuming a shield that's reasonably sturdy, probably metal-rimmed for extra protection.

The spear: I'm assuming you're describing a one-handed weapon here because of what you said about the shield. It's possible to use a spear two-handed while also using a shield, but usually (in my experience) this is effective only with smaller shields, not the larger ones you've described. A one-handed spear is good at thrusting but probably not slashing. Thrusting requires more strength than slashing (as with a sword) to do comparable damage, and may be more hindered by better armor. You might consider adding swords to your frog-men's equipment list.

Spears are quite effective when being charged, particularly in combination with those large shields you've described. When your frog-men fight in groups they should form a shield wall, brace against charges, and maintain formation. In the shield-wall formation they might choose to have second-rank fighters forgo their shields in order to use their spears two-handed (for much-more-effective blows). Sword and shield in the front rank and spear in the second rank is an effective combination.

Posture: Being shorter than one's opponent is often a disadvantage, especially if the taller opponent also has longer reach (as when shorter and taller people fight each other; the taller ones tend to have longer arms). But your frog-men have an important advantage: strong jumps. This suggests a tactic where they lurk out of opponents' weapon range waiting for an opening, then jump, strike, and fall back. I would expect this to be comparable in many ways to modern fencing bouts; viewing such bouts might give you ideas.

Upper body strength is important in melee fighting, but strength does not come only from the upper body. The best fighters I know (and granted, we're talking re-creation here with wooden weapons, not live steel, and people are not actually trying to kill each other) start pushing a blow from the back foot, through the legs and hips, and into the upper body until it becomes a powerful weapon blow. (This is hard to describe in words, sorry.) My point here is that your frog-men, being particularly strong in the legs, probably have the element of surprise the first time they strike; nobody's going to be expecting that much power from such a little guy. They should aim for tactics where they can use that surprise.

Because they can walk upright, they have the ability to trade shield coverage for height advantage on an as-needed basis. Human fighters sometimes try to maintain a crouch for protection too, but we can't do it for extended periods because we're not built for that. Having the ability to choose as conditions dictate should be very powerful.

Aerial attacks: Because of those strong legs they can leap -- you said about 4m up. This gives them the ability to leap and strike while dropping back to the ground. I'll leave it to the physicists to compute how powerful their strike would be -- I would expect this could deliver a pretty solid blow, what with gravity on their side like that. However, unless the low-level magic in your world includes flight, once a frog-man is airborne he has limited control over where he goes. Opponents nimble enough to dodge the blow -- or trip him up as he lands -- will be a real danger. Aerial attacks from surprise, on the other hand, can be very effective; if they can ambush their opponents from cover (or even from lower tree branches!) that first blow is likely to be doozy.

Crouching in martial arts is a tradeoff. While a frog-person with stronger back legs might weigh the different factors differently, the results remains the same:

I have not studied enough martial arts to be fully versed in the crouching positions of different arts. However, when I asked a similar question of one wiser than I, they explained that the one advantage of a strange crouch is that you can study the many moves which naturally follow from the crouch which do not naturally follow from a standing position. These different attacks and defenses could catch someone by surprise. His opinion was that there isn't a good enough reason to crouch (disclaimer: his particular discipline had no crouches, go figure), but he also was referring to humans and not frog men.

This may be a little out of the box, but my first thought about a frog person fighting from a crouched position with disproportionately long strong legs was capoeira.

Particularly the mix of crouching, low rolling kicks, and impressive vertical leaps in a near constant fluid motion.

The use of a long spear (long enough to use as a punt pole) and large-ish shield (large enough to use as a water craft) would probably be difficult to incorporate... These weapons would seem to lend themselves well to battle formations, like the phalanx, but could be a little unwieldy or less practical for single combat. A large sheild in one hand and a long spear in the other could be cumbersome and may make agile movement difficult.

Almost any fighting technique can have advantages. If they have very strong legs and are able to move quickly from that position, say just like a frog and jump especially in any direction they could be very effective.

It has to do with strength and levers. Our legs aren't really made to be fast from a squat to any other position, knees bent is good legs folded is bad. I would be next to worthless to react if I was stuck in that position for very long. But if this is racial thing then having legs designed for bursts of power from these positions (like frogs and grasshoppers) then it could be extremely effective.

Being able to jump up to 10 meters in any direction would be extremely useful. And a 4m vertical you could jump over someone's head out of reach of almost all melee weapons. It would keep them out of reach and I would think that with legs that powerful that kicking your opponent would be a bone breaking experience.

Group fighting (in a war/army spectrum)

If they were disciplined and well trained, they could be a pretty effective fighting unit...having all members jump back as a disengage and then lunge forward as a reengage would be devastating if well coordinated.

In any kind of mass combat, the ability to jump 4m up and 10m forward means they would be able to leap over an entire fighting unit. That means that when the front rank engages, the rear rank can take a step back and leap over the enemy unit, enabling them to surround the enemy instantly and strike from all sides.

This would probably disorient most enemies and break their morale rapidly because they will immediately feel trapped between forces. It might also cause them to fight to the death due to having no way out. Using a tactic like this allows you to destroy an entire enemy unit with no survivors, something nearly impossible to do without a full surround.

It might create an air of brutality and terror around them, if enemies are aware that these tactics are used, and might make any unit that isn't strongly trained and well prepared scared to engage them in field combat.

I was imagining that they would crouch, while holding a shield and a spear. That way, their shield covers the entirety of their body because they are now in a small ball. This makes them difficult to attack with conventional weapons, although they would probably not do that in front of a war golem or some person with a big bad hammer

Then to attack, they could hop up while thrusting upwards at the enemy. If the frog person has other humanoid allies, if the enemy directly in front of her points his shield downwards, then the ally can then go attack the enemy.

Not the answer you're looking for? Browse other questions tagged magic warfare medieval races or ask your own question.

12
How would an Empire survive weak crown authority?
13
Building a tank to fight a mech
5
How to build a fortress on a floating island?
11
Mermaid Land (and Sea?) Combat
10
Aerial battle of knights riding flying creatures - preferred weapons for the warriors
1
How would a medieval army conquer a treetop city?
4
What Sea Creatures Would Make Good Undersea Cavalry?
33
How to defend when attacked by an avian species?
3
How to fight against Lion People?